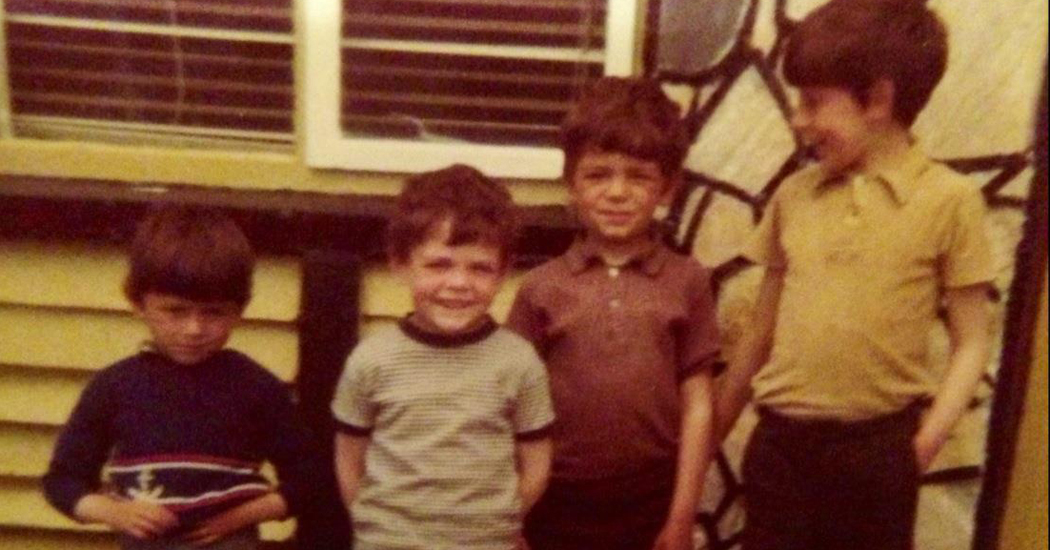 A takeaway in Letterkenny sends columnist Brian McDaid on a trip down memory lane to harder times.

I had my order in and was standing back at a safe social distance awaiting my takeaway. A Big 4 n Chips meal it was only then that I realised that I had no money with me.

I try to look around the back of the takeaway to see if I could spot Kevin (one of the Grimes) I had left my wallet in my coat on one of them mild autumn evenings when you think you need a coat going out in the morning and realise that is was a mistake as the day went on. Now I was standing in the Four Lanterns in the Port Rd, wishing I had checked that I had money in my pocket before I acted on the spur of the moment to go in and get chips.

The staff member asked as another bagged up the chips. I’m about to go through the motions of searching my pockets again as the till rings up the total and I feel something stuck to the plastic of my laminated vaccine card. It’s a twenty – thank god for that.

I’m sitting outside the Four Lights parked on the opposite side sampling a few chips and a drink of Fanta, and thinking to myself, looking at the building across there was a time that I shopped in a building there on the same spot and never needed any money.

A long time ago, a shop called Sloan’s was on this very site. The steps up to the present day Four Lanterns were inside the shop when it was Sloan’s with a window display at street level before you climbed the steps to the main part of the shop. The reason we didn’t have to pay when we shopped there was because we got our clothes on credit to pay in for. Every weekend one of the collectors would call at your home to collect a few pounds which would be taken off your bill. 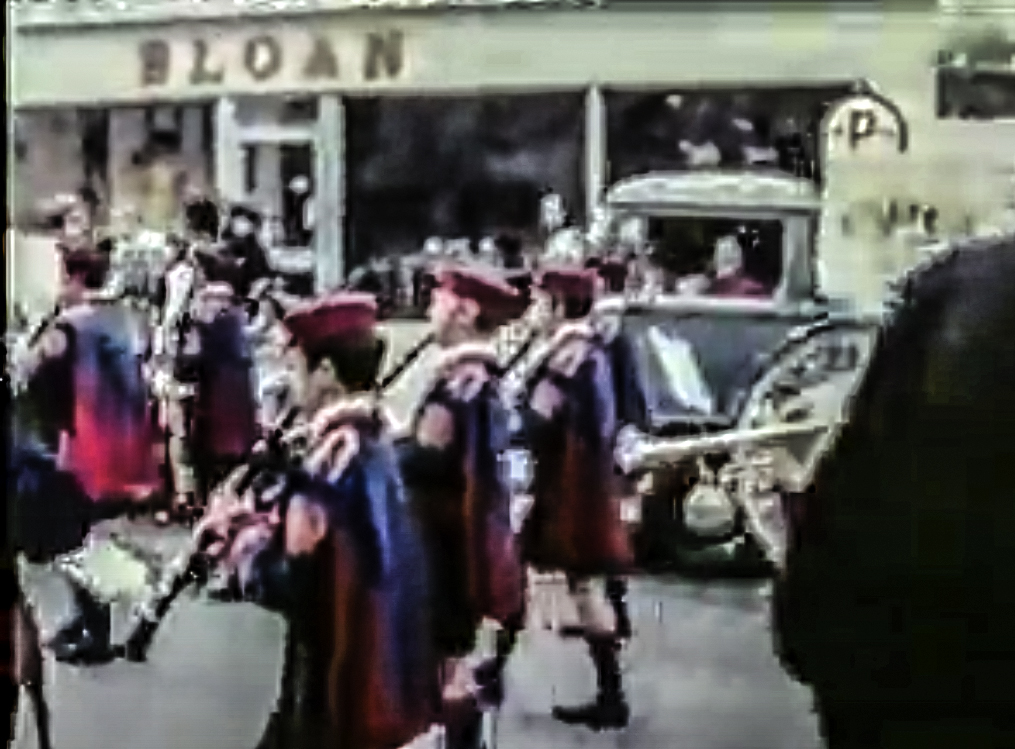 A view of Sloans Shop on the Port Road in Letterkenny with a band playing at the Folk Festival.

Sloan’s was just one of the places we bought our clothes in the same way Bossie, Meehan and McNames all had clothes runs which were there over the years to give us the benefit of the doubt when the “Daddy’s not in”excuse was given when funds were not there.

I would be sent to Sloan’s by my father to get clothes for himself and the four of us boys, we were all a bit too shy to try stuff on in the shop so we guessed the sizes on our trips into Sloans, and hoped they would fit. Clothing like jumpers, trousers and shoes were bought and god help you if you didn’t get a long good wear out of them.

Many days I walked out of that old shop where Sloan’s once stood with a new rig to pay in for.

Every so often my Auntie B would take me with her on a trip into Derry where she would collect her shoes that were modified for fallen arches in Mc Cutchens, the shoemakers as far as I can remember. Her shoes were like a pair of Brogues with a small bit of a heel on them, they had a very unique noise to them when she walked with a short sharp step when she was younger.

On one of my Auntie B’s trips into the north she seen me looking at a pair of bumpers and decided to buy them for me. She insisted that I would try them on in the shop and I kept saying that they would fit and I would take them as they were but auntie B was having none of it. When I went to take off the old shoes the shop filled with the smell of my Donegal feet. The shop assistant never flinched as they proceeded to fit me out for a set of new bumpers, which were a high type of dark blue runner with white white sole toe cap and round protector for your ankle bone. “Walk up the floor now to see how they fit” 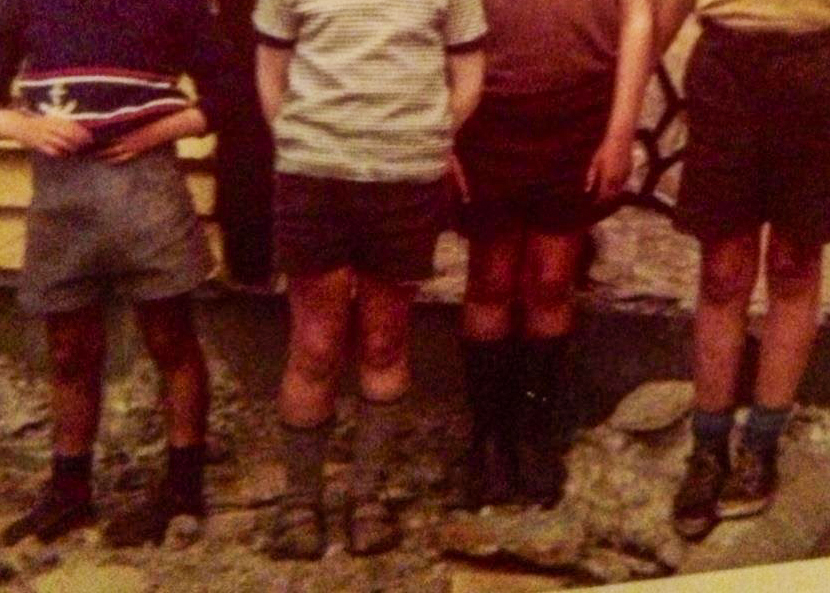 Zooming in on an old photos my bumpers from the 70’s are well worn out at this stage.

Bida said, they felt class nearly as if you weren’t wearing shoes at all. Can I keep them on? I asked, Auntie B gave a nod of approval as my old shoes were packed into the new Bumpers box, and auntie B opened that very small purse of hers to pay for them. Keep your feet under the seat in front or you Auntie B whispered to me as we went to cross the border in the Swilly Bus back home to Donegal. 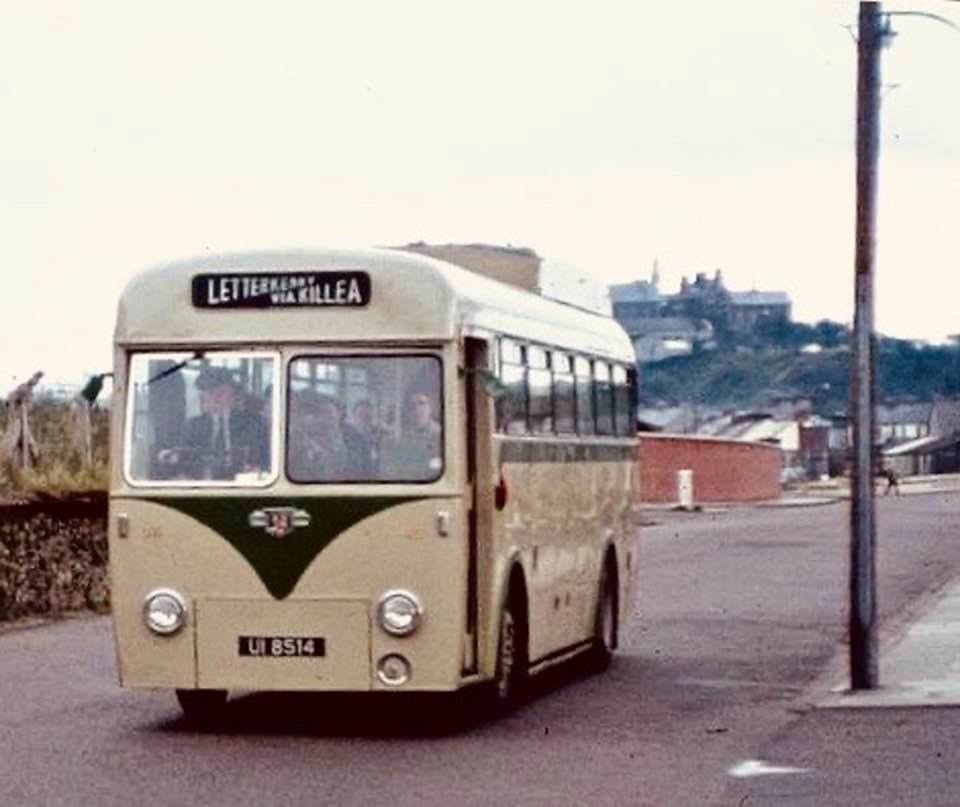 The Lough Swilly Derry bus on its way home to Letterkenny.

I was so proud walking up the back road home that evening looking down at my brand new bumpers. I had a shopping bag which had my old shoes in it and some PG Tips Tea, just like the ad on the telly with the monkeys, a brand that isn’t available in the South. And stuff for the boys for sharing. If I thought that crossing the border and crossing the customs was bad. My father was worse when he seen the new shoes an in a moment of anger told me to take them back to my Auntie B and tell her not to be going buying shoes for our feet, we’ll manage ourselves tell her.

Auntie B was more understanding than I thought she would have been about this and told me to leave them there in your grandfather’s room. For a few months when I would go down to my Auntie B’s and needed to go up the town a message for her, I would put on my numbers and head up the town in them and after a while when they got well scuffed I smuggled them up to my own house and if my father seen them he never passed any comment on them. 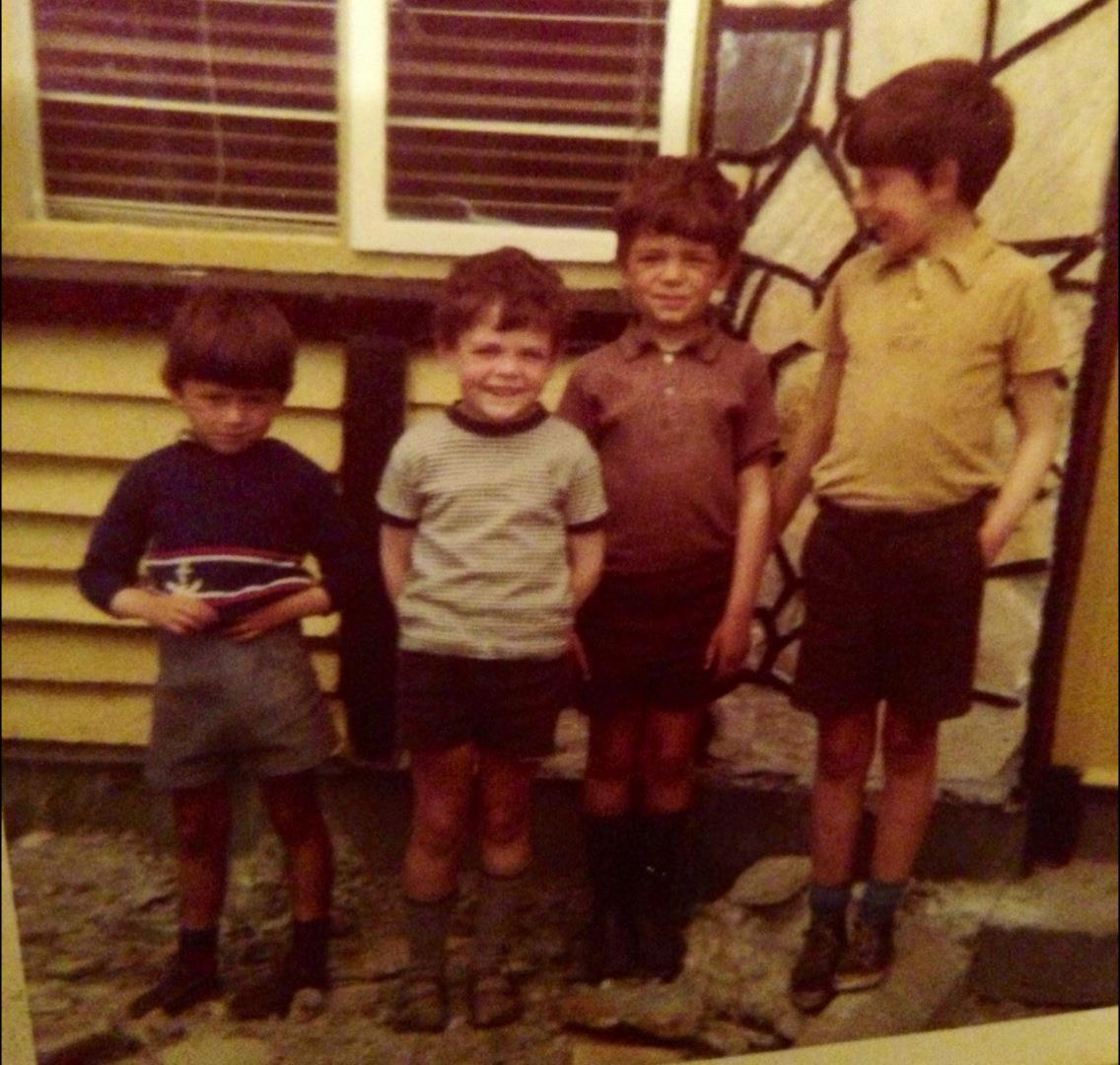 The four of us children from left Peadar, Cathal, and Nelius at the front of our home and me on the right with the old bumpers on

The Bumpers are now back in style now there are Converse High Tops. I see a lot of young trendy people wearing them. An old photo from years ago of us boys standing at the from of our house in Wolfe Tone Place shows me still in the bumpers which I wore to the finally fell apart. In the picture one of my brothers are wearing wellingtons the other is wearing my old sandals all of which was the norm going up in a house full of boys. 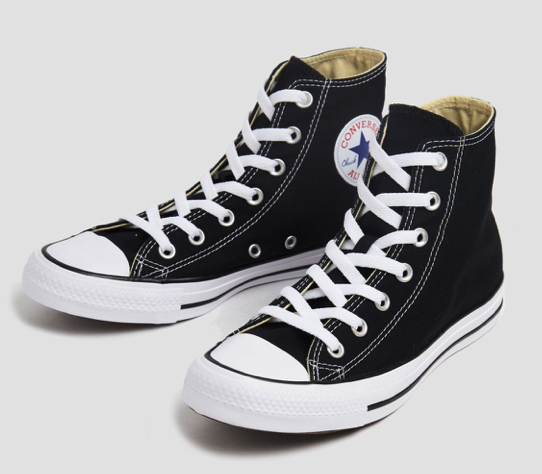 Sloan’s were on the Port Rd and before that they were on the High Road where you could double your reflection on the black marble if you stood in the doorway, paying in for things were a part of life, times were very hard and sometimes we forget how hard things were. My trip to the chipper for a Big Four after the recent lock down and standing with no money at the counter opened more memories than I expected from the past but after a bit of day dreaming I enjoyed the takeaway in the town I grew up in.