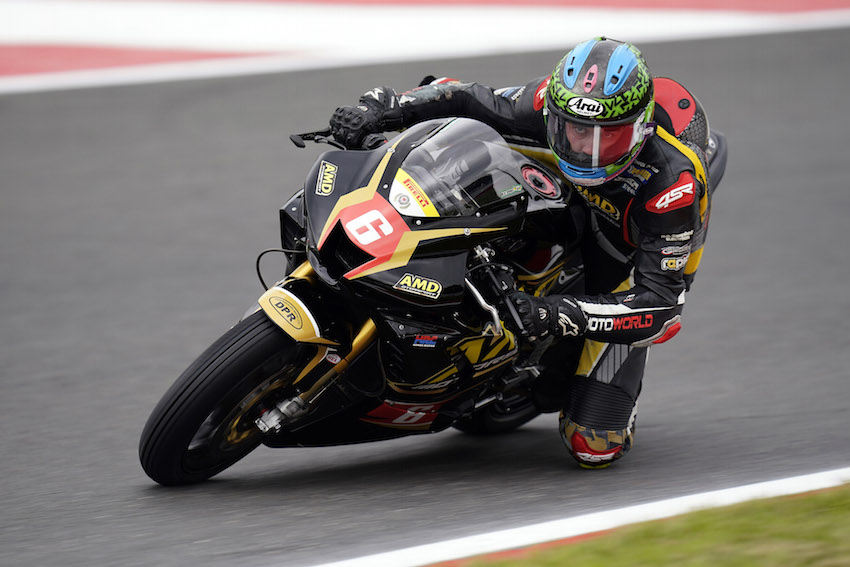 Richard Kerr wrapped up his 2021 Pirelli National Superstock Championship campaign at Brands Hatch at the weekend and although he wasn’t able to add to his points tally, he took a solid 17th place.

This concluded an impressive maiden year in the class for both himself and the Dumfries-based AMD Motorsport team.

Riding the factory-prepared Honda Fireblade, Richard was faced with mixed conditions at the Kent venue across the first two days of action with qualifying on Saturday held on a damp, but drying track.

The Kilmacrennan rider set a lap time with wet tyres fitted to the Honda but ran out of time to pit for the drier-spec tyres and with a late flurry of action around the famous 2.43-mile Grand Prix circuit, he ended up in 20th place for Sunday’s final race of the season.

That meant it was a seventh row start for the 21-year old and a solid opening lap to the 12-lap race saw him make up one position and slot into 19th place. He soon found himself battling with a group of five, and sometimes six, riders for the final championship points with Levi Day and fellow Honda riders Davey Todd and Shaun Winfield amongst the group.

Positions changed hands regularly but try as he might and despite his strong, consistent lap times, Richard wasn’t quite able to make it into the top 15 and had to settle for 17th place at the chequered flag. It all meant he ended the season in 19th place overall in the Championship with 43 points with excellent top ten finishes at Cadwell Park and Donington Park the undoubted highlights.

Richard Kerr: “Obviously, it would have been nice to have scored points at the final round but I’m happy enough with how I rode in the race and certainly pleased with how the season’s gone as a whole. It was always going to be a bit tricky this weekend due to the lack of track time we had when we were here back in July and the mixed conditions on Friday and Saturday didn’t help our cause as we only got a handful of dry laps prior to the race.”

“I had an enjoyable battle with the likes of Brent Harran and Davey Todd though and it was a strong position but we just didn’t quite have the pace to get into the points. Like I say though, it’s been a good, solid debut year in the class and we’ve scored points at a lot of races with some really good results along the way, seventh at Cadwell being the highlight. It’ll be great experience for next season so a massive thanks to Fraser and Mary at AMD Motorsport and to my Dad, Stephen, Robert, Big Man and everyone else connected with the team.”

Fraser Dykes, Team Owner: “First and foremost I would like to congratulate Tom Neave and Honda Racing UK on becoming 2021 Superstock Champions. As for AMD Motorsport, we end the season on a positive note with 17th today after the last visit to Brands Hatch ended with two DNF’s! Overall, Richard has achieved much more than we had hoped for in our first season and his first year with the 1000cc 210hp Honda Fireblade with many impressive results along the way.”

“I would like to thank everyone one who has helped Richard and the team this year and add a special thanks to the Barr brothers at 3b Construction for their assistance with logistics at the last four rounds. We’ve probably travelled as much as any and more than most throughout the season and the big Scania “show pony” truck from 3b has been a pleasure for Mary to drive and a god send for AMD’s busy work schedule! We’re very much looking forward to next season to see what the team can do.”

To close their account for this year, the team will head to Jerez, Spain at the end of the month to compete in the final round of the Spanish Superstock Championship giving Richard another but different challenge as his career develops.

No points at Brands but strong year for Kerr and AMD Motorsport was last modified: October 19th, 2021 by Staff Writer
Facebook0Tweet0LinkedIn0Print0