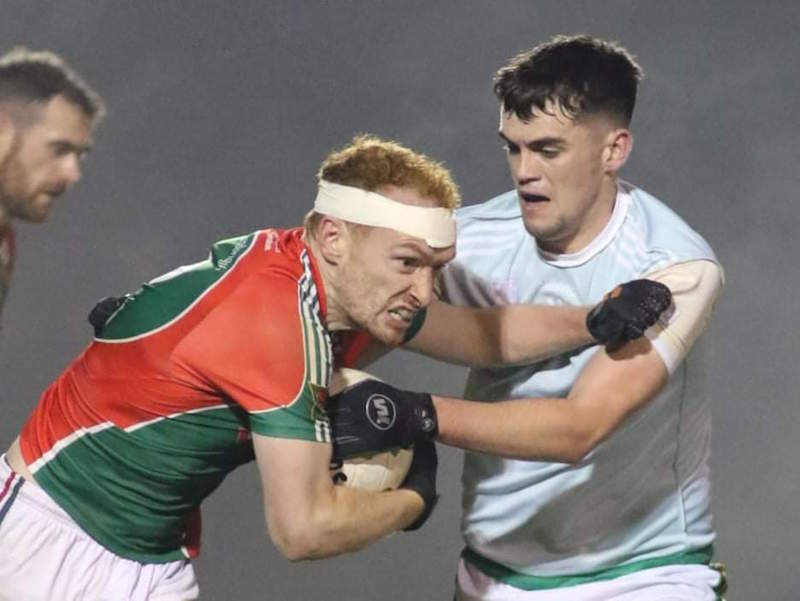 Impressive Downings advanced to the Junior Final with an impressive display against Cardonagh this evening.

It took ten minutes before we had the first score and then we had five points in quick succession.

Kevin ‘Gooch ‘ Doherty got Downings underway with a 45 , followed a minute later by Alan Pasoma from play.

Conor O’Donnell replied for Carndonagh with a super solo score after racing 60 yards and tapping over.

Back came Downings with two inside a minute, Pasoma again from play and then a Lorcan Connor free from 30 metres. Conor O Donnell scored another fine point but Lorcan Connor replied immediately to restore Downings three point lead.

That almost became six when after a quick-fire passing movement, Eric Roberts got in on goal but he was denied the goal by a super save by John Mc Groddy, diving low to his left.

Johnny McGroddy and Lorcan Connor added points from play to extend the lead to 0-07 to 0-02 but just before half-time Conor O Donnell converted his and Carndonagh’s third point to leave it 0-07 to 0-03 at the break.

Donal Doherty got Carndonagh off to a flying start to the second-half with a fine score from play and they wasted a couple of good chances in the next few minutes to narrow Downings led even further.

Downings then created a great goal chance wig another excellent build-up , Kevin Doherty’s piledriver crashed back off a post , Shay Boyce’s follow-up also it a post and Gary McClafferty ended the excitement by kicking a fine point. Lorcan Connor and Jamie Lee McBride points for Downings made it a five point game , 0-10 to 0-05.

But points from Donal Doherty and Conor O Donnell left just three in it again.

Johnny McGroddy and Christy McDaid with a free exchanged points, 0-11 to 0-08 to Downings.

McGroddy and Ryan Kelly then exchanged points to keep three in it but Downings finished off in style with their two main men Connor and McGroddy kicking excellent points from play to leave the final score 0-14 to 0-09 and a place in the final against Letterkenny Gaels in two weeks for the Downings men.