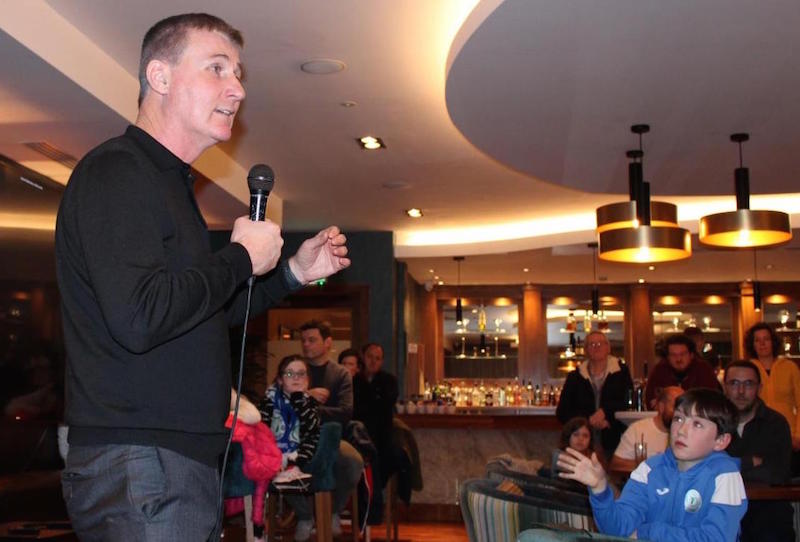 A FINN-tastic night for Donegal businesses in Dublin!

The Finn Harps Supporters Club Dublin Branch welcomed members of the Donegal Dublin Business Network to a Social and Information event at the Tallaght Cross Hotel on Friday night last.

Those present were given an introductory presentation about Finn Harps Football Club by dual FHSCDB and DDBN member Robert Love followed by some thoughts about Finn Harps from current Ireland manager Stephen Kenny.

In recent years the supporters club have been forging links with the Donegal Dublin Business Network who have been the generous sponsors of the prize fund of their annual Last Man Standing fundraising competition over the past 2 years.

On Friday, supporters club members got the opportunity to say thank you to the DDBN for all their support and the chance to help them learn a little bit more about Finn Harps FC.

PRO for the Supporters Club ‘Robert Love’ delivered a very interesting presentation about Finn Harps as one of Donegal’s most remarkable sporting success stories.

He spoke of Harps history and firm roots within the community promoting equality, diversity and inclusion across a range of areas. The great work being done by the club at underage level, the academy, schools outreach programs, promoting positive mental health, nutrition education and road safety throughout the county were highlighted. 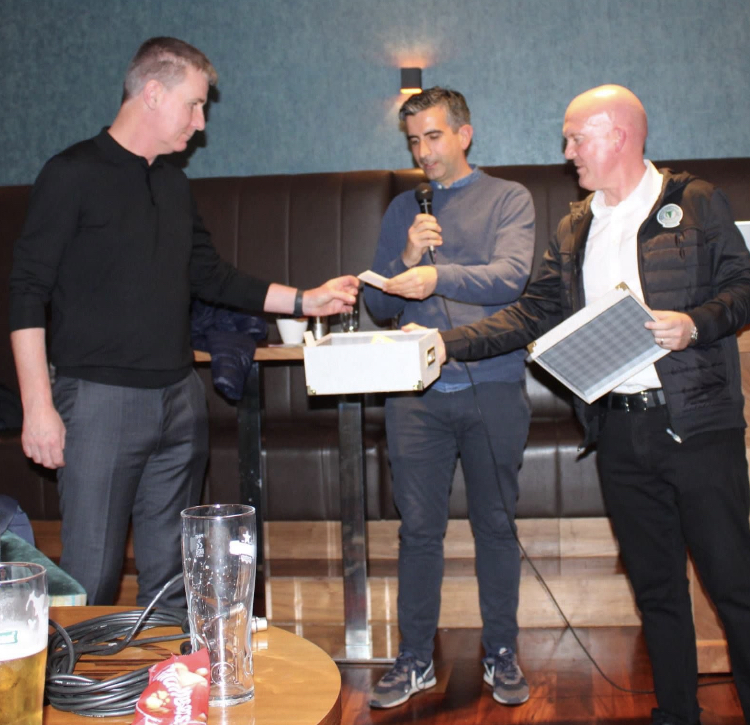 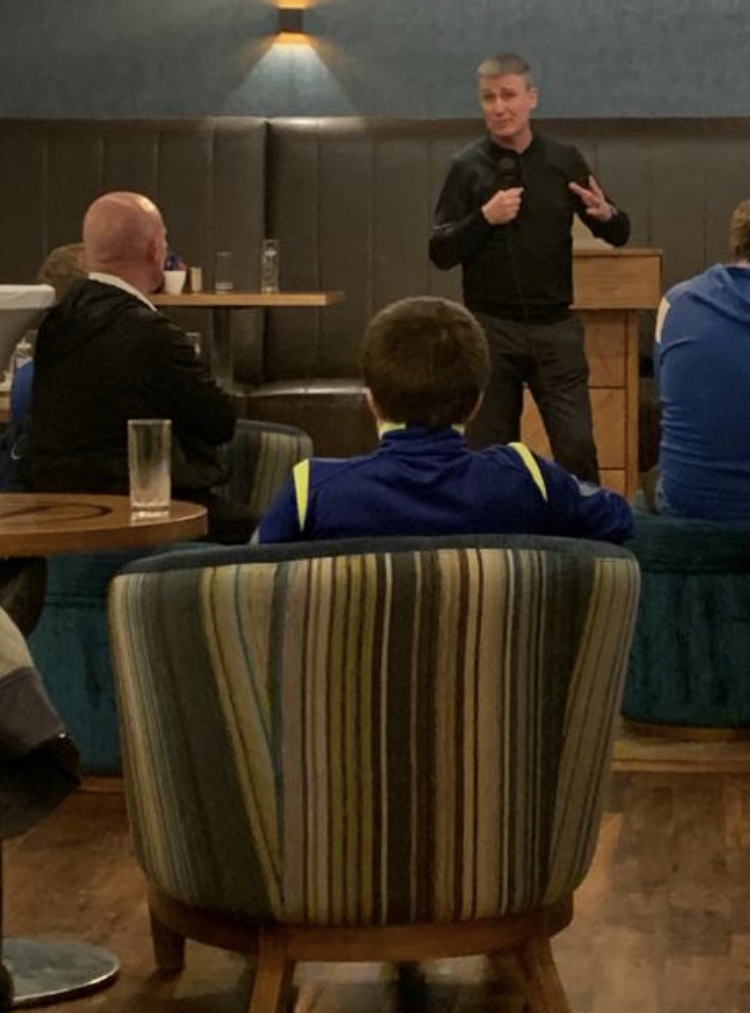 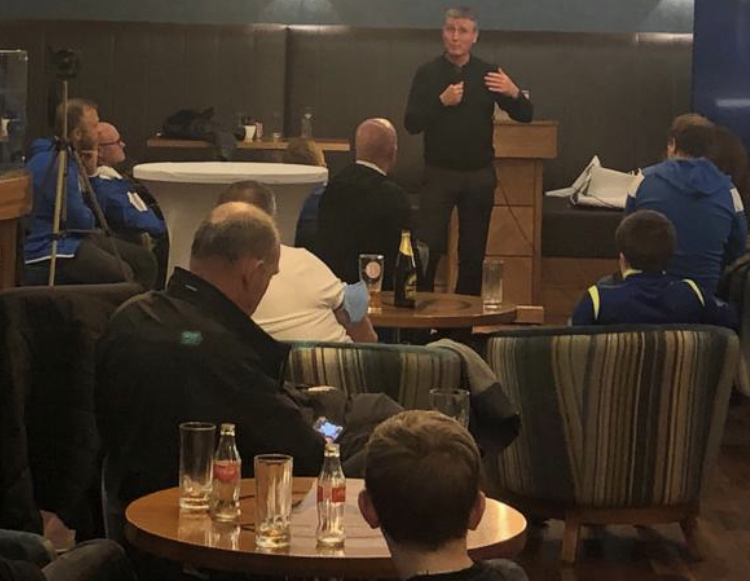 The team’s recent success of staying in the premier division under Ollie Horgan and the club’s ambitious plans for a new stadium and centre of excellence for the whole county were also discussed.

Members of the DDBN were encouraged to sign up for the supporter’s club and to flex their networks to help Finn Harps.

A four minute video by world renowned football commentator Clive Tyldesley describing his trip to Ballybofey, for Finn Harps UEFA Cup clash against Everton in 1978 and his continued admiration for the club rounded off the presentation which was very well received by all of those in attendance.

The guest of honour, Ireland’s football manager Stephen Kenny then spoke about his admiration for Finn Harps FC and all they have achieved against the odds within Irish football.

He spoke of the passion of Ollie Horgan, his coaching staff, the team, supporters and club volunteers as well as all the wonderful developments at underage level and the importance of these developments being continued.

He spoke highly of the many Finn Harps people he has met along his own remarkable footballing journey and paid tribute to Kevin McHugh and Shane Bradley in particular.

Making reference to Friday’s venue at the state of the art Tallaght Stadium, Kenny spoke of the need for all the stakeholders involved to ensure that the new Finn Harps stadium becomes a reality.

He said that proper facilities like these would be essential in helping Finn Harps to grow their fan base and make match night experiences a more enjoyable experience for everyone who attends.

Responding to a comment from MC for the night TV3’s Tommy Martin (a recent recruit to the Finn Harps SC), Kenny said he was delighted about the sell-out crowd for Ireland’s upcoming Euro qualifier against Portugal at the Aviva Stadium and is looking forward to what should be an exciting game.

Stephen Kenny and Tommy Martin then drew the raffle winners for a signed purple Finn Harps jersey and other club merchandise which was kindly sponsored by Finn Harps FC and the Club Shop.

The proceeds of this raffle will be donated to Donegal Down Syndrome at an upcoming home Harps game on behalf of all these groups who cooperated in making this event such a success. Guests at the event were able to purchase club merchandise from a pop up shop organised by FH Club & Online Shop.

The DDBN kindly sponsored the drinks at the event and afterwards everyone went along to watch Finn Harps play Shamrock Rovers at the nearby Tallaght Stadium. 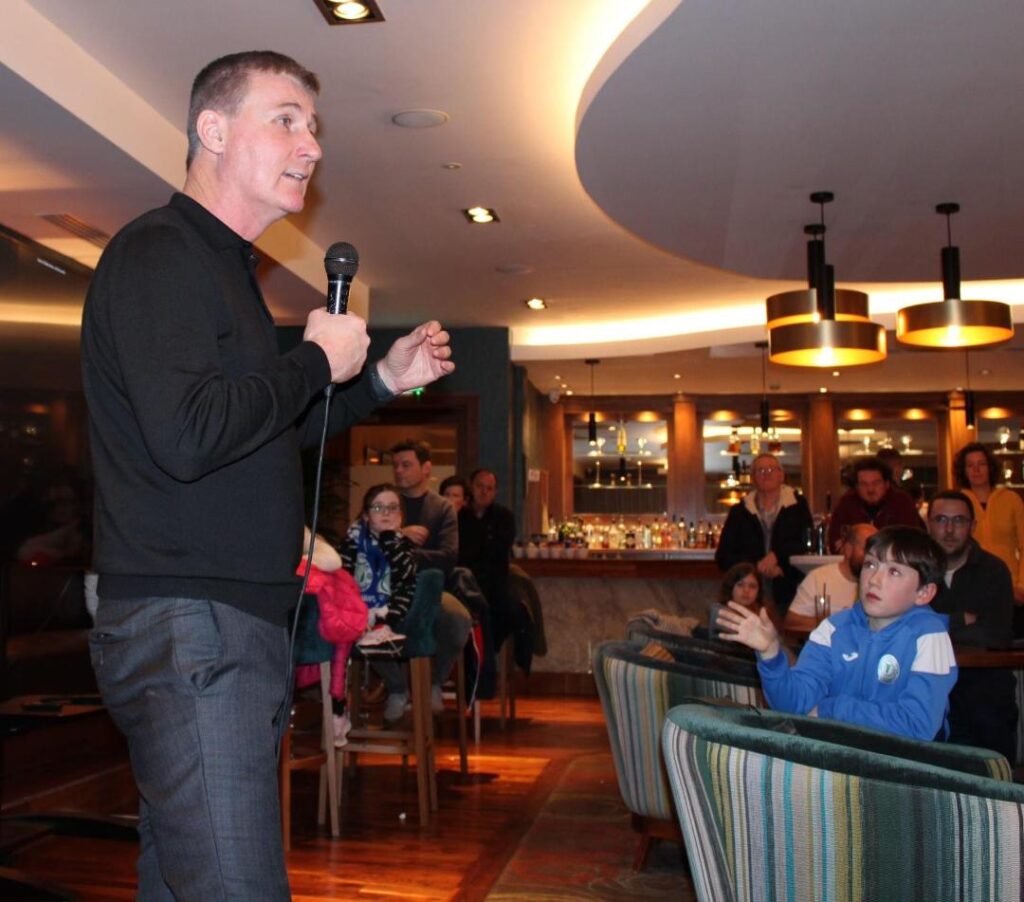 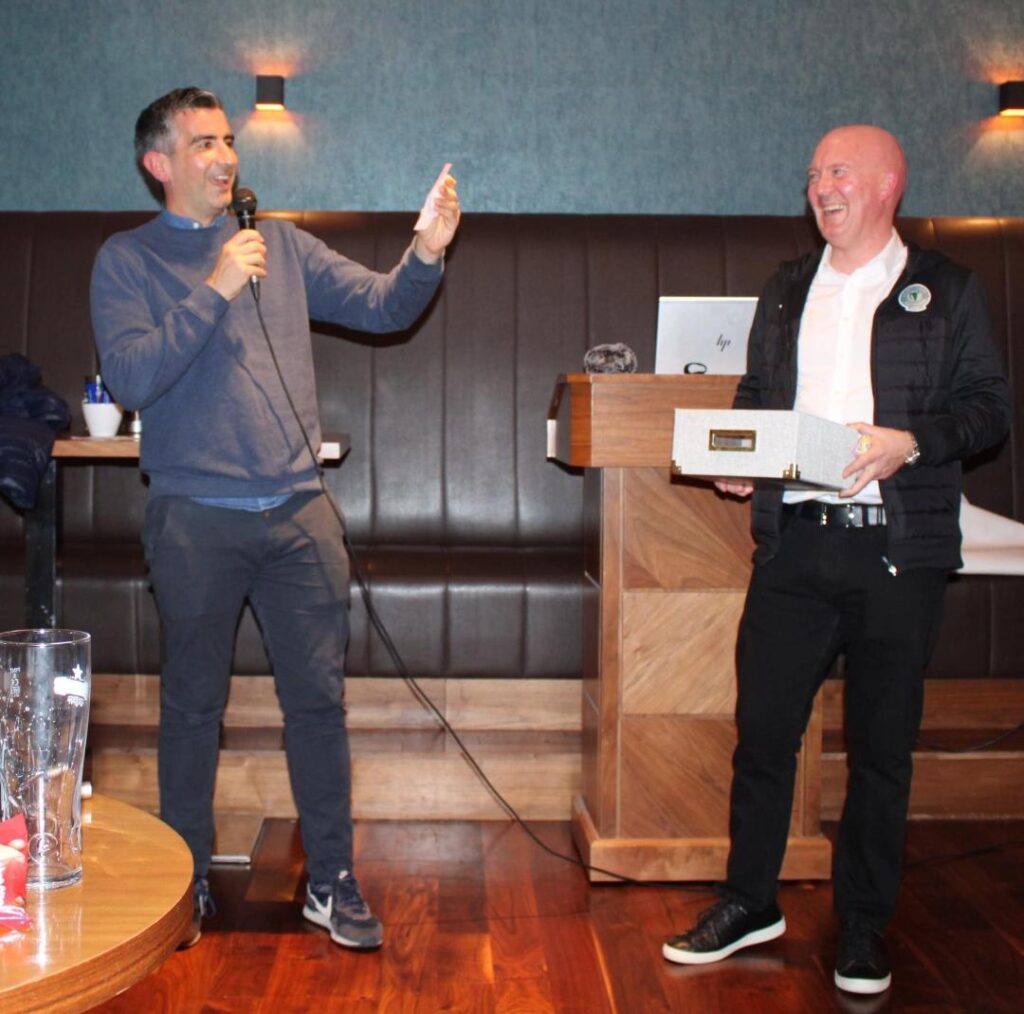 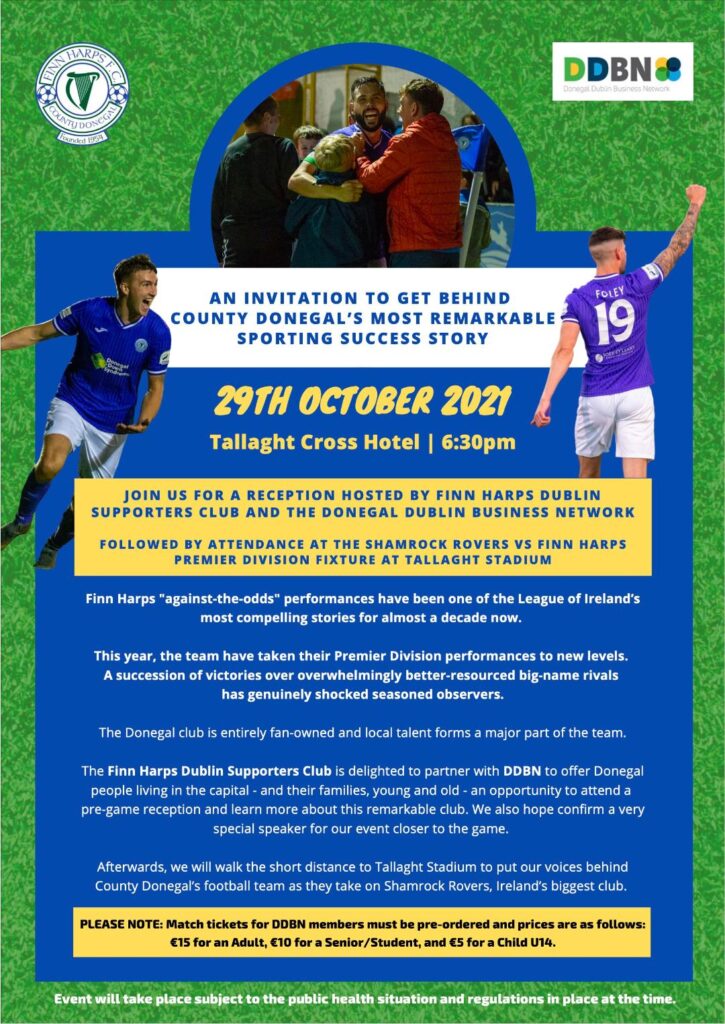 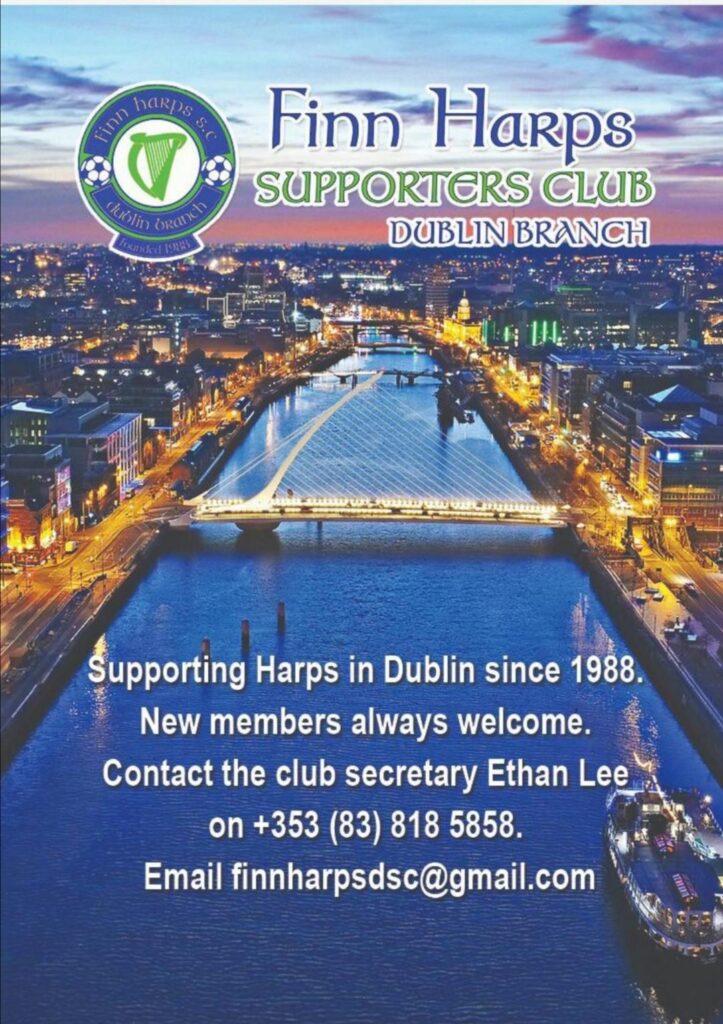