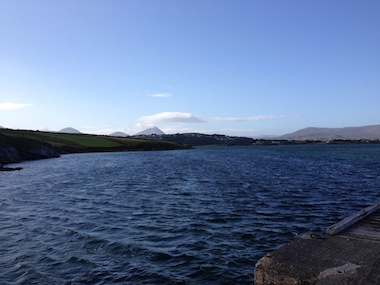 Raw sewage released in eight towns and villages in Donegal

The pace of waste water treatment improvements is too slow, the Environmental Protection Agency warns today, after revealing that eight towns and villages in Donegal are discharging raw sewage into the environment.

The areas with no treatment plants are: Burtonport, Coolatee, Falcarragh, Kerrykeel, Kilcar, Moville, Ramelton and Rathmullan.

More than a third of these areas will not receive treatment until after 2023. 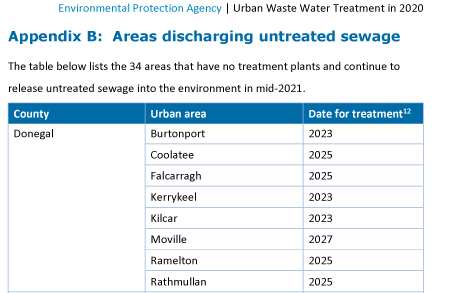 The EPA report on Urban Waste Water Treatment in 2020

There has also been a call for a treatment plant to be built in Moville, where the town fails to meet standards in the European Union’s Urban Waste Water Treatment Directive in 2020.

The latest EPA Urban Wastewater Treatment Report, published today, shows the progress being made, while also highlighting the need for continued investment in essential wastewater services.

In Donegal, Irish Water has invested in wastewater infrastructure in Bundoran, Convoy, Glencolmcille, Killybegs and Ballybofey/Stranorlar.

Commenting on the report, Dr Tom Ryan, Director of the EPA’s Office of Environmental Enforcement said: “It is unacceptable that 15 years after the final deadline to comply, half of Ireland’s urban waste water is still not treated to the basic EU standards. There are repeated delays in providing proper treatment at many areas, and this continues to put our environment and people’s health at risk.

“It is clear that Ireland will still need substantial investment over many years to bring our public waste water treatment plants and public sewers up to standard. Irish Water must deliver the essential infrastructure in as timely a manner as possible and resolve the underlying causes for the delays in upgrading treatment systems.”

In response to the report, Irish Water said that Donegal has had one of the highest levels of investment of any county in Ireland, receiving almost €300 million on water and wastewater upgrades since 2014.

A spokesperson said: “Irish Water is on track to end the discharge of raw sewage in Kerrykeel and Kilcar by 2023 with works commencing on the construction of two new wastewater treatment plants. The Gweedore Sewerage Demonstration Scheme is also under construction with the installation of the pumping pods, associated works and wastewater treatment plant upgrade expected to be completed by early 2022.

“In addition, plans are also in place to develop the Falcarragh Sewerage Scheme and Coolatee Housing Scheme, which are at detailed design stage, with a likely construction start date of 2024. Irish Water, in partnership with Donegal County Council, is progressing plans for a new wastewater treatment plant and associated infrastructure at Moville.

“Irish Water is also working in partnership with Northern Ireland Water to upgrade wastewater treatment plants and sewerage networks in Lifford, Carrigans and Killea in Donegal.”

“Irish Water has already completed projects in Donegal to end the discharge of raw sewage and improve treated wastewater quality being returned to the environment in several locations throughout the county. Such works include the completion of sewerage schemes in Bundoran, Convoy, Dungloe, Glencolmcille, Glenties, Killybegs and Saint Johnston. An upgrade to the Ballybofey-Stranorlar Wastewater Treatment Plant is also complete. The Letterkenny Sewerage Scheme including network improvements is now substantially complete.”

Inlet works and storm water storage works are also scheduled for commencing at Castlefinn, Clonmany, Creeslough and Newtowncunningham in 2022.

Nationally, the majority of all raw sewage discharges are on track to be removed by the end of 2025.