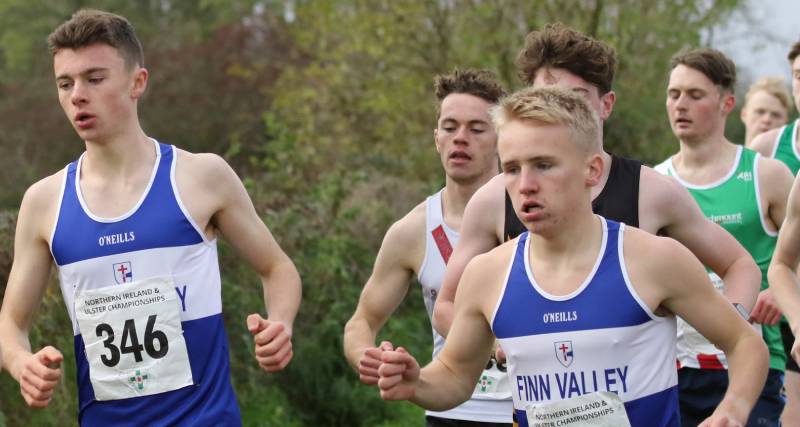 Donegal athletes had a great showing at the Finn Valley centre on Saturday at the Ulster Uneven Age Group and Novice Championships.

In particular, it was a great showing from the Finn Valley athletes at U19 level for both Boys and Girls.

Both teams won gold for the club, with Sean McGinley, Oisin Toye and Diarmait Keogh finishing in an impressive 2-3-4 for the Boys U19 team to narrowly beat Burren AC by 1 point for the gold.

In the U19 Girls race, Nuala Bose led the team home in 3rd place, with her teammates Cara Laverty and Sarah Bradley right behind her to easily win gold for the club. Teammate Emer O’Brien wasn’t far behind as she finished a respectable 9th place, just behind Amy Greene of Rosses AC.

Cranford’s Oisin McBride was second in the U11 Boys, just ahead of Evan Ward from Rosses AC, with Donegal winning gold as Noah McGuire, Davyn McGlynn and Enna Byrne all coming in the top 12. Finn Valley and Letterkenny once again won medals, silver and bronze respectively.

The U13 Girls race was dominated by Finn Valley, with the A team winning gold and the B team winning silver, Niamh McGlinchey, Nia Byrne, Holly McNulty and Adriana McGlinchey all finished in the top 12 while Faela Houston of Rosses AC came third.

Finn Valley and Donegal again won gold in the U13 Boys races and U11 Girls, with the Rosses AC girls picking up bronze. Letterkenny’s Daragh Naughton finished second and Shay McNulty was first home for Finn Valley in 7th as Odhran Rodgers and Tristan Green of Rosses AC came 5th and 11th respectively. Clara Gillespie was the first Donegal girl home in the girls race as the Tir Chonaill AC athlete was 4th, followed by Finn Valleys Saorla Gilligan and Caoimhe McElhinney, and Killybegs AC’s Mila Rose Conwell Boyle, who finished 9th 10th and 11th respectively.