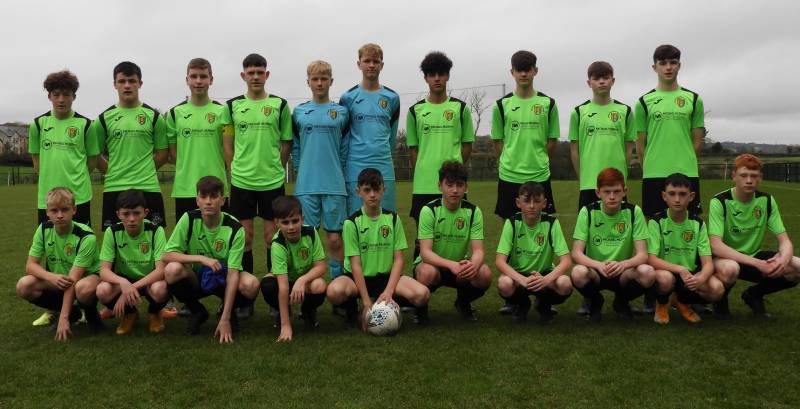 Donegal’s Under 14 League representative side were beaten 2-1 by South Belfast Youth League in the Schoolboys Football Association of Ireland Kennedy Cup quarter-final at Ballyare.

For the first 15 minutes Donegal were dominant with Killea’s Ryan McNeill showing well for the Tír Chonaill men.

He in turn found Caolan Duffy after finding some space just inside the opposition half and dissected the defence with an inch perfect pass to the dangerous Eoghan McNeilis who  was unlucky not to score.

After this South Belfast then got a foot hold in the game and created a good chance on 19 minutes only for Harry Pearson to save smartly to his right.

A goal in the 27th minute by Ciaran Boyle was well taken after a clearance by the Donegal ever dependable left sided wing back Dhahi Rayes, ricocheted into his path much to the delight of the travelling support.

The second half progressed as the first half finished with Donegal dominating possession while South Belfast looked to expose Donegals high defensive line. Donegal introduced Eoin Cassidy at right wing back with 12 minutes remaining. This allowed Matthew McGeehan to attack the right channel with Donegal desperately trying to get back on terms.

Indeed Donegal deservedly levelled with 7 minutes remaining in the second half. Kyle McLaughlin was released with a fine through ball from Tiarnan Callaghan. McLaughlin left two players in his wake before disguising a delicious disguised pass to McGeehan just inside the penalty area. Turning to his right he touched forward before striking a low shot which the keeper did well to parry. It was McLaughlin who was first to react with a good finish from 6 yards.

However, the Donegal joy was short lived when Hollywoods Rudi Little popped up with a last minute winner to send the Northern boys into the semi final.

Cathal Gallagher was Man of the Match after another gargantuan performance.

This brings an end to competitive football for this squad for 2021. However there is much to look forward to for this group in the coming year.

The Foyle Cup, The Galway Cup, National Subway Cup and a trip across the Irish Channel are just some of the challenges awaiting this Development squad.