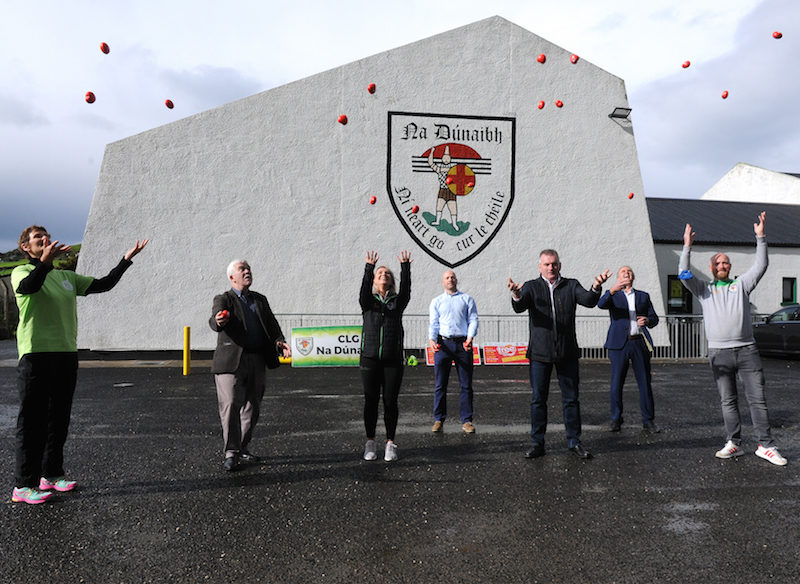 A superb display from Downing’s dazzling man of the match Lorcan Connor spurred his side to a thoroughly deserved victory over Down champions in Pairc Esler, Newry.

Connor hit a priceless 0-6 and was the flying fulcrum of an impressive attack, especially in the first half.

And when Downings were rocked by a late comeback from the Down champions who hit 12 sides, it was Connor who steadied matters with a priceless point.

They totally dominated the first half and were well worth their 0-8 to 0-1 half time lead.

The losers came into the match strongly in the final quarter with full forward Adam Garland very prominent.

But Downings had a good goal chance which was not taken in the 40thminute and were under a fair degree of pressure thereafter.

However their previous experience of playing in Ulster and of winning All-Ireland Gaeltacht titles stood to them in those final frenetic moments.

Downings had three major changes from the team that annihilated Letterkenny Gaels in the Donegal county final.

Experienced duo Tiernan and Danny McBride did not start while corner forward Eric Roberts was also an absentee.

These were significant losses even before a ball was kicked.

And there was some needless drama before the match as the press box was locked until almost 1pm and there was no power and no wi-fi and nobody seemed to know anything about anything.

And so three freezing hacks had to wait for almost an hour before someone came to eventually open the press box.

Eventually power was located and the wifi code was given to us at 1.25pm which is simply not good enough.

Newry was in stark contrast to Armagh where everything was organised as it should be.

But Downings made light of the major absentees and came out of the traps like Usain Bolt.

And there was none swifter than classy full-forward Lorcan Connor who was fouled and he cooly arrowed over their first point after just 20 seconds.

It was all Downings in those opening minutes and their Down opponents could not ger their hands on the ball.

This was starkly illustrated in a lightning Downings five man move that ended with Connor lofting over a glorious soaring point in the strange November sunshine.

Aughlisnafin were slowly growing into the game, and they found the target in their first serious sortie into enemy territory.

And right half forward Shea Croskery may have fallen, but he still had the wherewithal  to strike the ball over the bar after seven minutes.

But that was to be their only score in a most one-sided opening half.

They did try to make an impression but hit six wides and never really bothered a very well organized Downings defence.

Meanwhile late substitute Kyle McFadden increased Downing’s lead before terrible twins Connor and Johnny McGroddy combined cleverly for the latter to hit a fine point with the outside of the boot.

Connor’s poise, pace and precision was causing Lisnafin all sorts of problems, and he struck another fine point in the 18th minute to put his side into. 0-5 to 0-1 lead.

Downings had a brief chance of goal when a snap- shot seemed to momentarily confuse Aughlisnafin keepers Margan Croskery, but the big keeper just managed to keep the ball out as he moved backwards over his line.

Downings had further points from Johnny McGroddy and Keelan McGroddy to give them a most deserved 0-8 to 0-1 half-time lead.

Aughlisnafin did threaten on a number of occasions and the excellent Shea Croskery looked threatening but their execution was nervous and should really have had a few more points on the board.

And normal service looked to be resuming as Downings continued to dominate in the third quarter.

Connor tacked on another point and then we had a potential turning point in the 40th minute.

A lovely Downings move initiated by the inevitable Connor finished with Kyle McFadden in a one on one with Aughlisnafin keeper Morgan Croekry whose outfield sorties were not impressive.

McFadden had Eric Roberts inside him and facing an empty.

He had ample time to slip the ball to his much better place colleague.

Instead he opted to punch the ball over the put to put Downings into a 0-10 to 0-3 lead as Shea Croskery and a revived full-forward Adam Garland got his side off the mark.

Had Downings got that goal, this match would have been well over.

Instead, it was the signal for a strong revival from the Down side as Garland won a number of high balls and rediscovered his accuracy.

And the points flowed from Croskery, Garland and a huge effort from centre back Brennain McCumiskey to leave Downings leading by just goal on a score of 0-10 to 0-7.

There were a few hairy moments in the last ten minutes the Down champions made a late surge.

But the inevitable Connor showed real leadership when he converted a close range free after the outstanding Oisin Boyce was fouled.

It was a huge score for Downings as they saw out the remainder of the match.