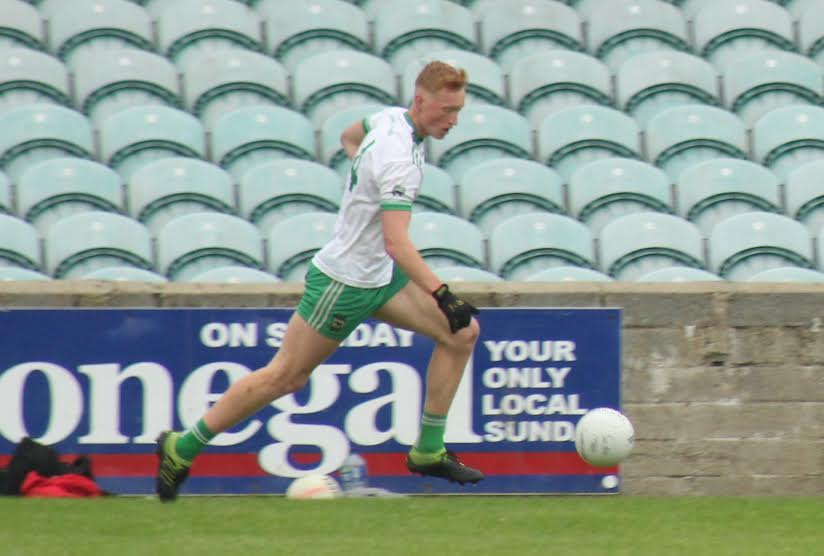 Ten points from Oisín Gallen and seven from Joel Bradley Walsh, fourteen of those from play, saw MacCumhaills prove much too strong for a gallant but outclassed Ardara team at O’Donnell Park.

Seán MacCumhaills made a flying start with five points from play in the opening seven minutes, Oisín Gallen started it in the first few seconds with a cracker from 35 metres, quickly followed by Conor McCormack, Kevin McCormack, Joel Bradley-Walsh and another from Gallen.

It took Ardara fifteen minutes to trouble the scoreboard, Daryl Maguire kicking a fine point from 40 metres and that brought us to the water break, and despite kicking some bad wides, MacCumhaills were leading by 0-05 to 0-01.

Maguire added Ardara’s second immediately after the break to leave just three in it, but after Matthew McGlynn had denied Jamie Keegan with a brillant point-blank save, MacCumhaills kicked four points in a row, three from Oisín Gallen and a first for Luke Gavigan to make it 0-09 to 0-02.

Matthew Sweeney got Ardara’s third in the 27th minute but MacCumhaills finished as they had started with three points in as many minutes from Bradley-Walsh, Oisín Gallen’s sixth from play, and wing-back Cian Mulligan to lead by 0-12 to 0-03 at half-time and looking set for the Under 21A Final.

Joel Bradley brought his personal tally to six from play with two fine scores and Chad McSorley, Jack Duffy and Joe Boyle all chipped in with scores before Bradley-Walsh kicked his seventh from a free to leave the final score 0-24 to 0-04 to MacCumhaills and a place in the final against either Four Masters or St.Eunans.

Gallen and Bradley Walsh star as MacCumhaills coast to under 21A Final was last modified: December 4th, 2021 by Staff Writer
Facebook0Tweet0LinkedIn0Print0