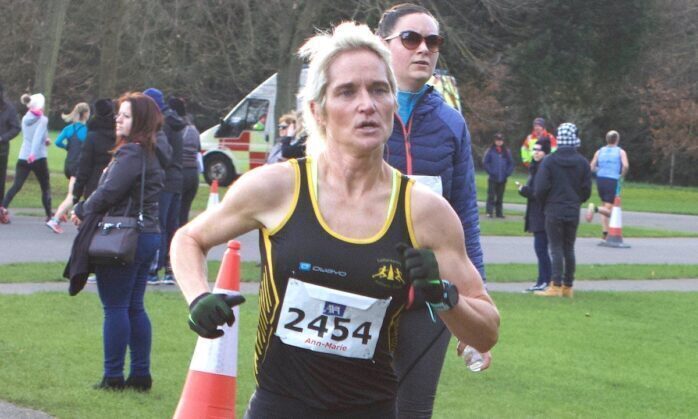 It was another successful weekend for Letterkenny AC women as they won the Irish Novices title in Gowran Park on Sunday while Anne Marie McGlynn set a new course record at the Belfast Seeley Cup on Saturday.

The astonishingly successful cross country season shows no sign of abating as Letterkenny AC stormed to a sensational win in Sunday’s National Novice Cross Country Championship at Gowran Park, Kilkenny. The conditions, both underfoot and overhead, were ideal for running.

Christine Russell and Noeleen Scanlan crossed the line together. After 4000metres they finished in identical times of 14.14. Christine was 2nd and Noeleen 3rd.  The race winner was Sligo AC’s Eavan McLaughlin, who was just 5 seconds ahead of the 2 LAC women.

Those 2 front runners were given excellent backing in their pursuit of team honours. In a very competitive field, Niamh Kelly was 22nd in 15.19. She was followed by Shauna McGeehan, who was 49th in 16.01. That quartet of  highly impressive performances gave the LAC team 76 points.  That total gave them a very creditable margin of 22 points over their nearest rivals, Dunboyne AC.

Cross country is a team sport and the 4 LAC counters were given excellent back up from Eimear Gormley, who clocked  16.34  and Orlaith Fogarty, who crossed the line in 18.57. Both women ran well and played an important role in the success.

The highly successful day didn’t end there. The 4 woman Donegal team, 75% of which comprised LAC runners, took 1st place in the Inter County Championship. Christine, Noeleen and Niamh combined with Helen McCready, of Rosses AC, to garner 36 points. This gave them an 8 point advantage over the Dublin team.

There were also some magnificent performances from the Letterkenny AC men. It was also a star studded field where Eoin Hughes came home in 30th place in 20.00. He was followed by Conor Gallagher, just 21 seconds behind in 39th place.

Eoin and Conor were both counters on the 6 man Donegal team that just finished outside the medals, finishing 4th in the Inter County race. The other 4 counters were Jon Jo Doherty, Finn Valley AC, Mark McPaul, Milford AC and the Rosses AC pair, Declan Ferry and Charlie O’Donnell.

The Letterkenny AC woman recorded a time of 33.32, with teammate Nakita Burke finishing in 3rd in 34.14, Sligo AC’s Aoife Kilgallon was second.