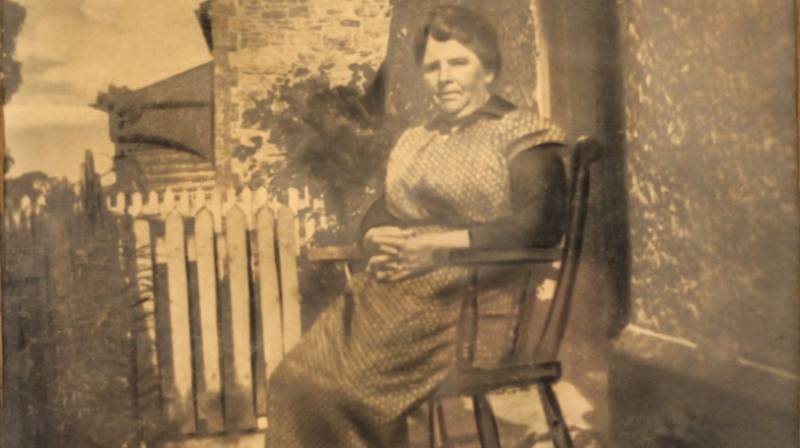 The power of an old photo, possibly taken over 100 years ago, lets us travel back in time this week as we try to imagine what it was like to live in Co. Donegal at the height of a railway network in operation in this county.

It wouldn’t be hard to imagine the strong personality caught in time. The picture is of Hanna O’Donnell who was born in 1869 (a decade before the first railway finally arrived in Letterkenny). Hanna was married to Hugh and they rented their two room home in the Townland of Anghlehard, Magherboy from John W.Tinney.

Hugh O’Donnell was a farm labourer and possibly could have worked for the land owner where he rented his house. In 1901 Hugh and Hanna had two children Bridget and James. Then, in 1911 in the National Census the family home recorded the same number of people living at Anghlehard but things had sadly changed, James who was one in 1901, a decade on there was a second son, Charles, who was now 9 but sadly Hugh O’Donnell had passed away and his young wife was now the head of the family.

Hanna’s occupation was described as a housekeeper and where her husband made an x where the head of the house signed the census of 1901 Hanna now made an x in the box as head of the house in the 1911 census. According to both census both Hanna and her late husband Hugh could not read or write.

Hanna O’Donnell’s mark as head of the household back in 1911 , one hundred and and ten years ago.

A very old photo of Hanna takes up the story of her life captured at the door of Manorcunnigham Railway Station in the 1920’s. The photo was professionally taken of Hanna by a photographer traveling through Donegal on the Londonderry & Lough Swilly Railway documenting the people working on the railway. Hanna worked as a cleaner at the Manorcunnigham station. She went out in search of work after her husband passed away and secured work cleaning at the stations. 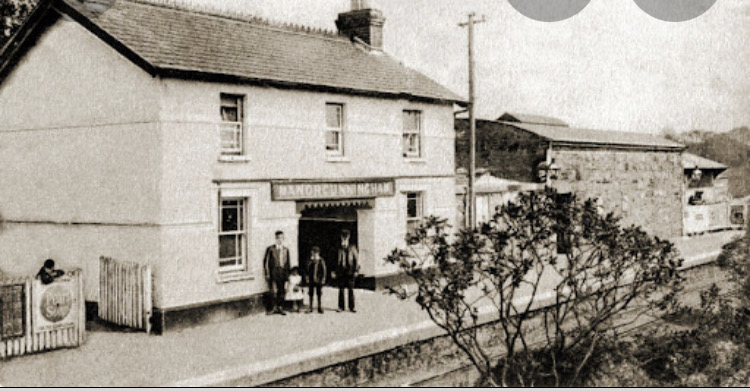 Hanna’s home was very near the village of Pluck but as it was in the neighbouring parish of Anghlehard, their house had no road into it and the family had to cross a burren to get out on the road above Pluck. Bridget was the oldest in the family and she looked after her two younger brothers James and Charlie when their mother went out to work everyday. 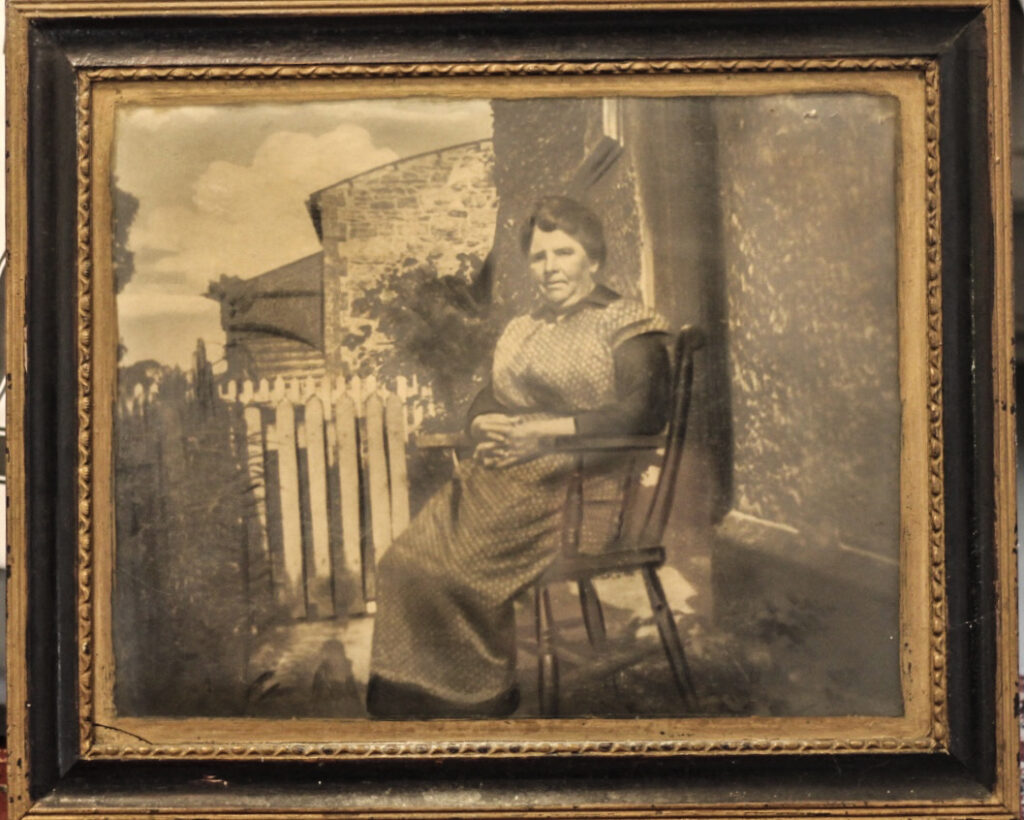 The picture of Hanna is of her sitting at the station door. The old station house has all the picket fencing in place and a very fancy fascia board in the different goods sheds at the station. It would have been a very busy station with farm produce being loaded locally at these stations. train loads of fish were hauled from Manorcunnigham from Burtonport on the way through to Derry, all of the post came by train to and from Donegal.

When Hanna’s daughter met and married Patrick McDaid from Brockagh, St. Johnston they rented a very small house in the middle of Pluck Village. Patrick was a ganger (Foreman) working on the roads for the Donegal County Council and as their children Pat and Nora arrived, they were rehoused in the neighbouring town land of Rossbracken just up the road.

The quickest way from Bridget’s new home to where she was raised as a child was across the field with a massive old standing stone at the highest point above Pluck village. When Pat was young he called his mother Biddy, that’s what her two  brothers called her in a house full of adults. 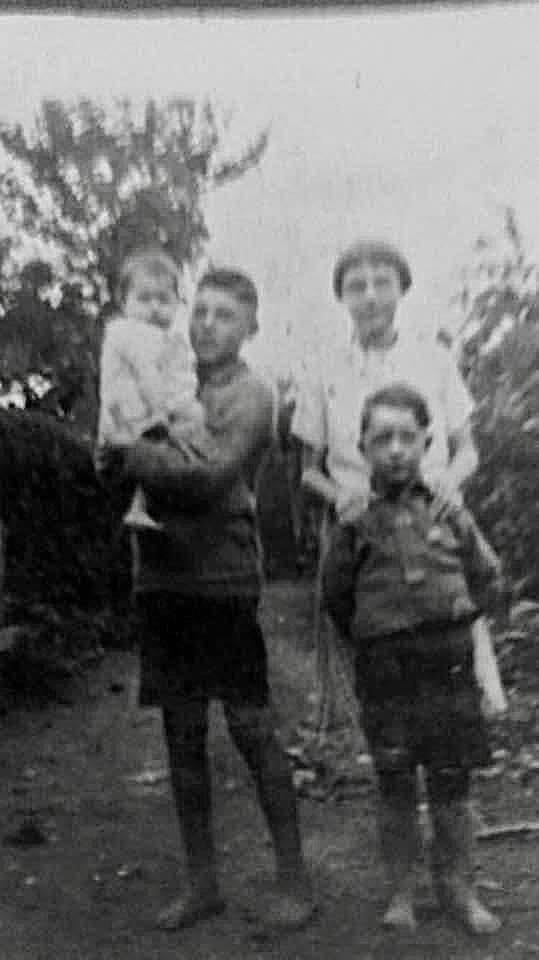 The McDaid wanes Pat, Nora, Hughie and Jennie in Rossbracken

The McDaid wanes made many trips across the field to their granny’s home and as the years progressed, James O’ Donnell got married and moved up near Convoy. Hanna now retired and her youngest son Charlie ended up moving in with her daughters family, the McDaids in Rossbracken. 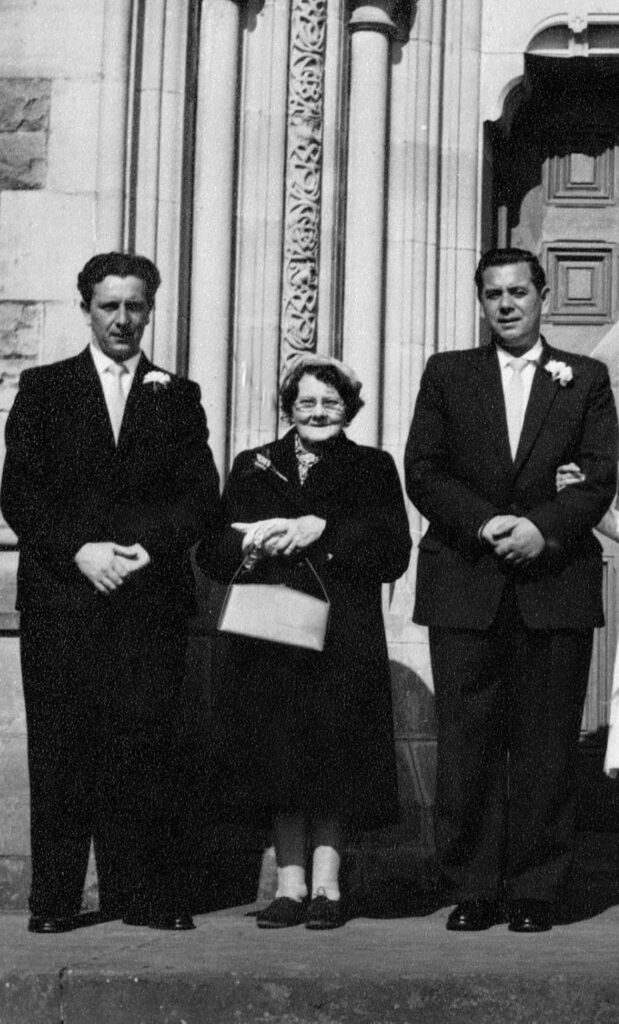 My granny Bridget McDaid with two of her sons Hughie and Fred.

Hanna O‘Donnell passed away in 1945 aged 77 and was laid to rest in Drumoghill where the old Lough Swilly train would steam down past the church wall for another few years to and from Letterkenny as the Burtonport line started to close down in the late 40’s and Letterkenny in the early 50s. Hanna oldest grandson Pat was getting work with Loughswilly in Letterkenny as the company made the change from rail to road and from train to bus. Another grandson Fred got work with Hamill and Lane lifting the railway lines. Following Footsteps.

In 2013 around this time of year I made the journey on foot trying to locate old remains of the Lough Swilly railway between Letterkenny and Burtonport, even though it was 60 years after the railway closed up, I still found a lot of people that told me different stories about their memories of the railway, but was totally surprised how much this old railway made to my own family.

A cousin of mine, Paddy McDaid, brought me this picture of my great granny, it was familiar to me and vaguely remember it hanging on the wall of my granny’s in Rossbracken but I never knew where it was taken or the story behind it.

On my journey in the morning I started my walk out of Pluck Station which is just beside where my Great Grandmother Hanna O’Donnell once lived. I had asked my late uncle Hughie, called after his grandfather Hugh O’Donnell, to join me on the walk to Letterkenny. That morning Hughie told me all about my great granny and we tried to see where the old wall stead’s of Hanna O’Donnell’s home once stood.

We went under the bridge above Pluck and Hugh told me of them slaying down that road in the years of big snow. Up at Pluck station we stood on the top of the bridge and looked down the line towards manor and towards his granny’s old home. Where the stone stood high in that field to remember people in this area that lived here before our generations arrived. 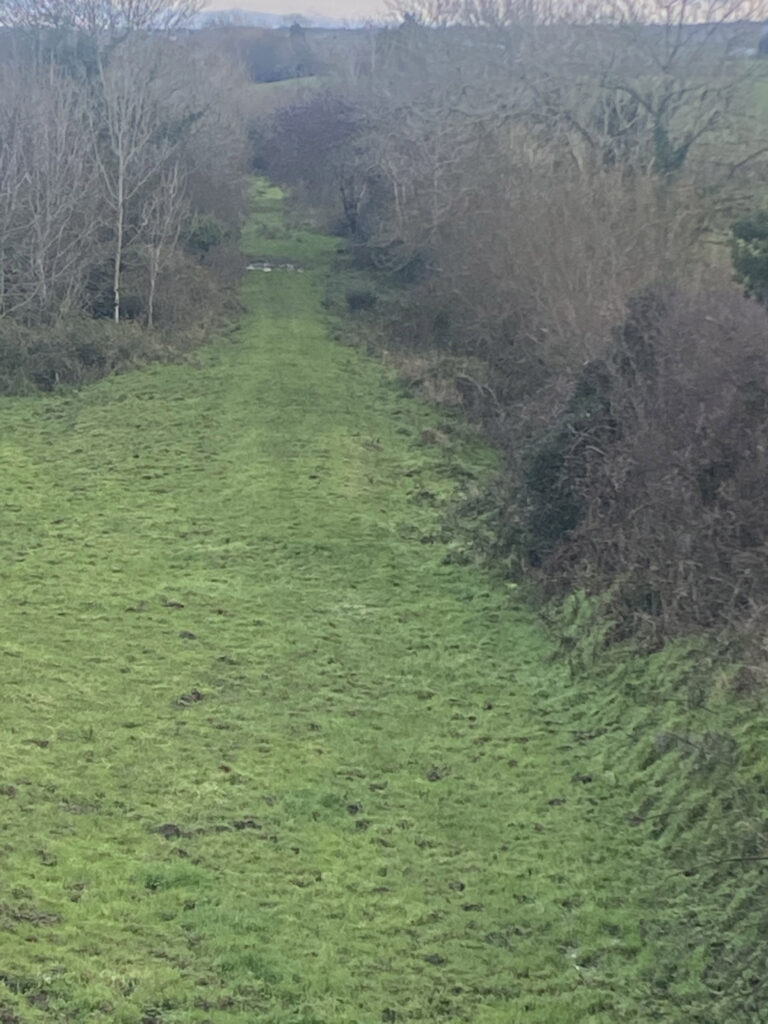 A view of the old Railway line which run past Hanna O’Donnells home in Pluck.

Our family stone is in Drumoghill in the family ploys remembered four generations of our family starting with Hanna who passed in 1946, her son-in-law Patrick in 1960, her two great grandson’s Patrick and Eamon (my older twin brothers) in 1962, Hannah’s own daughter Bridget in 1978 and and finally Bridget’s oldest daughter Nora in 2005. Hanna’s other two children James passed away in 1969 in Convoy with his wife Mary and Charlie passed away in 1974 and is laid to rest in Drumoghill with his wife Beckie (Rebecca).

When Hughie McDaid walked the railway a few years ago with me out of Pluck Station he was the last of my fathers generation and sadly passed away in 2020. 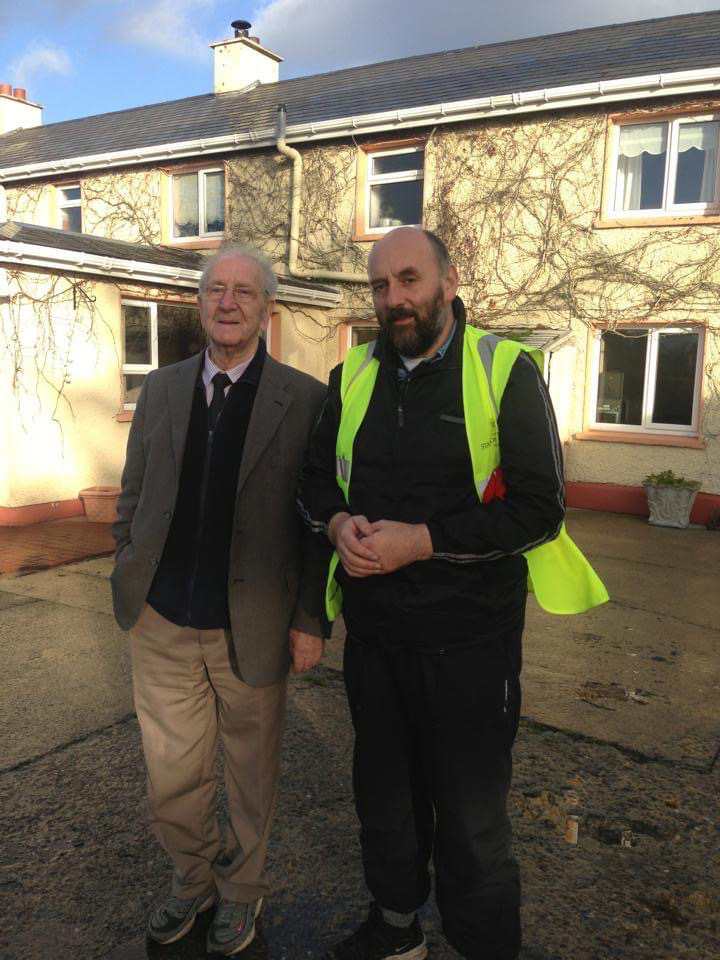 Pluck Station. My uncle Hughie and me walking down memory lane along the old Lough Swilly Railway in 2013.

I never met my great granny or my two older brothers whose 59th anniversary will fall on the 14th of December. But I  remember my Granny in Pluck as we called her even though she lived within Rossbracken and writing this, this week I think of my granny, of her losing her father so young, then of her seeing her two infant grandchildren, Patrick and Eamon going before her, at only a few weeks old. I think of her watching her son Fred (my father) lose both of them and later years his wife at a young age and watch him try to travel the same road that her mother travelled to try and raise his children on his own.

Hanna O’Donnell may not have been able to read or write but she certainly made her mark when it counted. She went out to look for work as a young mother when her husband Hugh passed away. She got a job with the transport of the day on the railway. Her son-in-law Patrick worked building roads for the Donegal Co Council and her grandson Pat  worked his lifetime  at  lough Swilly station in Letterkenny.

Hanna’s old 20 by 16 inch portrait from her days with Lough Swilly survived for a century and the many moves of different generations of her family over the years now left Rossbracken and Pluck. Her image is partly stuck to the glass of the frame, the parts of the pictured that have faded away are covers up with a coat of gold paint. Her picture is faded and not unlike the old stone milestone outside the old station house in Manorcunnigham on the old road from Letterkenny to Strabane where the distance can no longer be read. 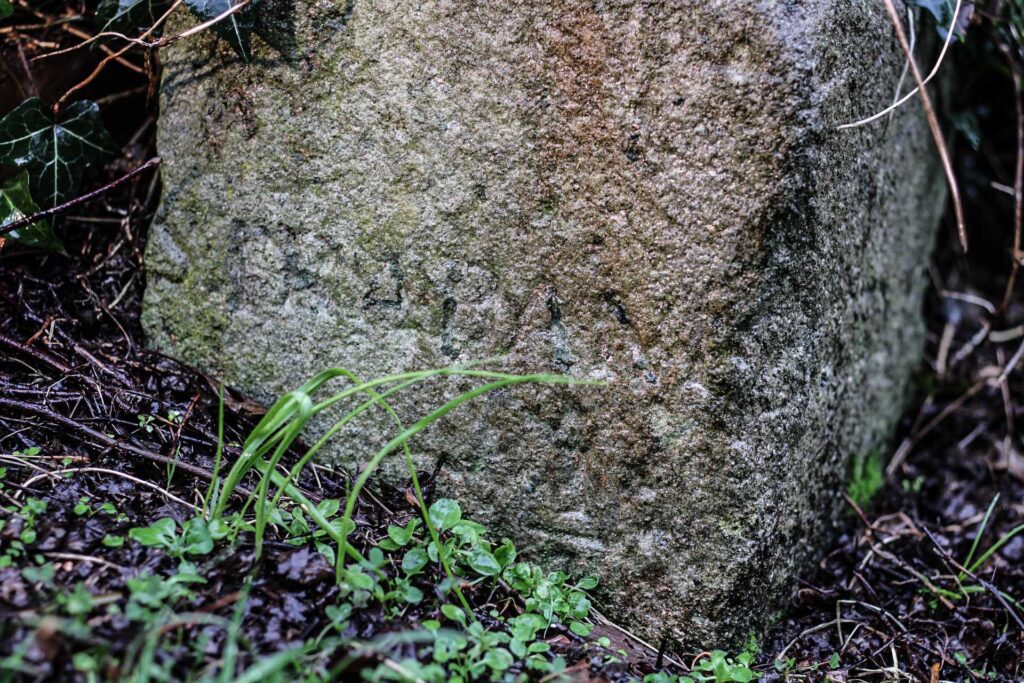 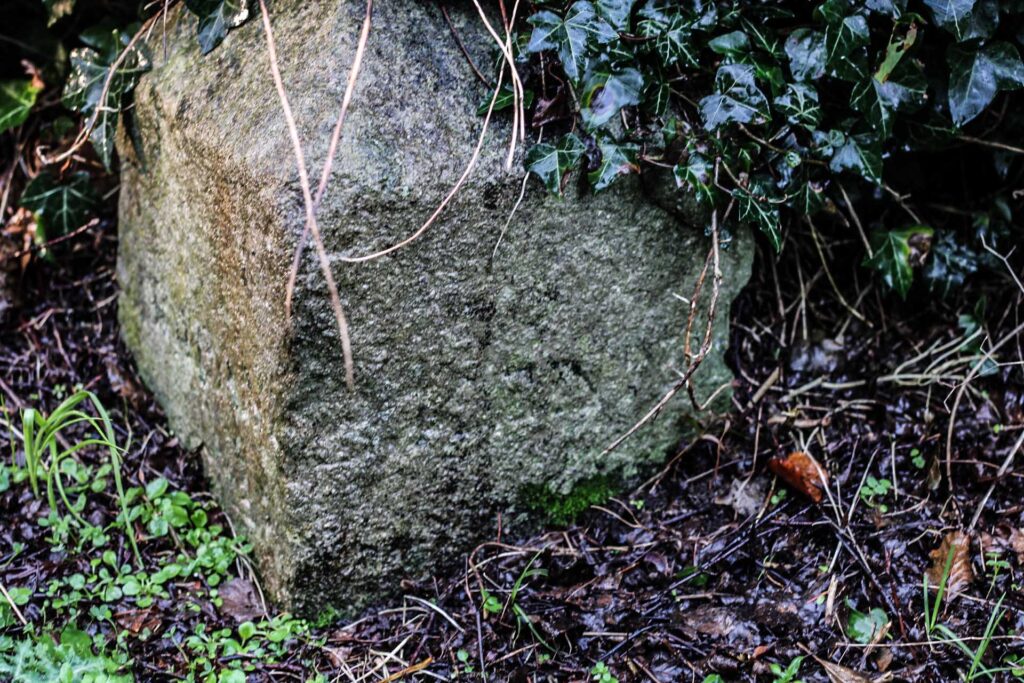