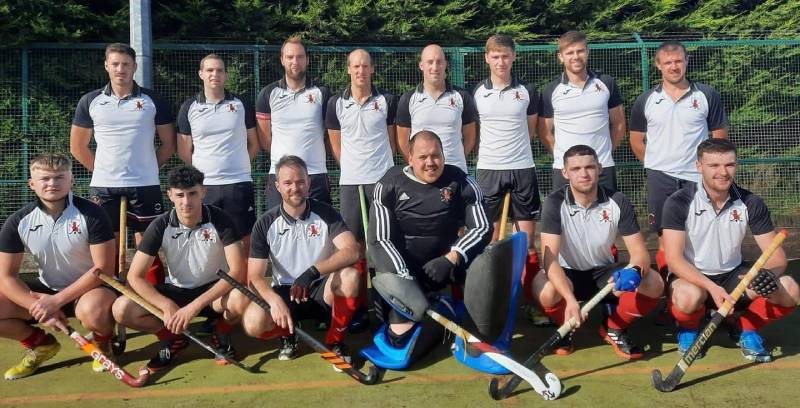 Raphoe lose out to Banbridge in final game of 2021

Raphoe mens 1st XI lost out 5-0 to Banbridge on Thursday night at the Royal & Prior, Raphoe.

This Kirk Cup match was to be Raphoes final game of 2021 before returning to Premier league action in the New Year.

Banbridge play their hockey in the all Ireland league, which is one league above Raphoe so the Raphoe men knew this would be a tough encounter but also great experience to play against such opponents.

Raphoe defended well for the first quarter, keeping the score at 0-0 their keeper David Moore to thank on a number of occasions.

Just before half time though, Banbridge broke the deadlock from a penalty corner, Ex Raphoe player Alexander Tinney finding the bottom corner with a drag flick despite Alan Meehans best efforts.

Shortly after the break Alexander made it 2-0 with another drag flick from a penalty corner and a third followed minutes later, another ex Raphoe player, Luke Witherow capitalising on some poor Raphoe defending.

Things got worse for Raphoe moments later as Banbridge rounded the Raphoe keeper and the resulting shot being saved on the line with some last ditch defending by the thigh of George Patterson, a penalty stroke was awarded. Luke Witherow stepped up for his second of the game but was denied superbly by the in form Raphoe keeper, David Moore.

Raphoe enjoyed their best spell in the fourth quarter before eventually letting in two late goals, Louie Rowe and James Evans popping up with a goal a piece.

Raphoe now get back to focusing on premier league survival in the new year as the bottom six teams battle it out to remain in the premier league for another season.

Raphoe lose out to Banbridge in final game of 2021 was last modified: December 17th, 2021 by Staff Writer
FacebookTweetLinkedInPrint