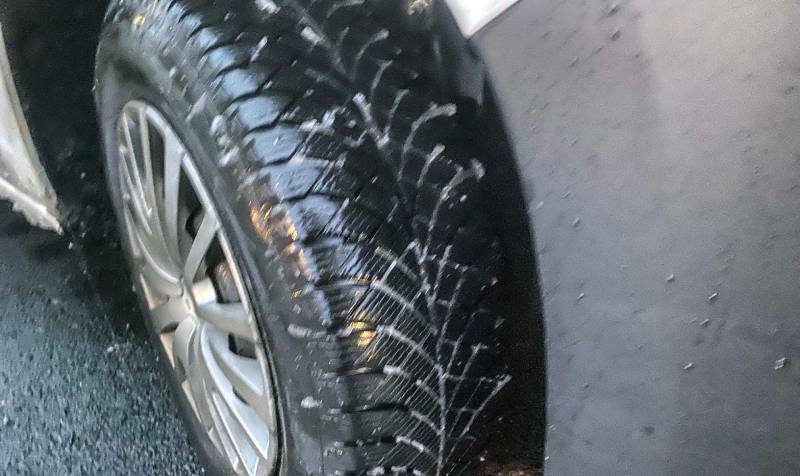 Since I put on the winter tyres there wasn’t a bit of snow. That all changed last weekend, but more about that later.

The problem in Ireland is that our winters are milder than what they once were and if it snows it’s more than likely gone the next day.

Winter tyres seemed to be highly promoted this year or maybe it was only the algorithm that follow my interests online.

Every year I consider getting winter tyres, even in years gone by I had a set of old rims with winter tyres permanently fitted which were swapped over on the first sign of snow.

Them old snow tyres were noisy in their day but they done the job where a regular road tyre could see you stranded.

All weather tyres are so good now you wouldn’t even know you have them on. I have mine on for 5 weeks now and the and there’s no difference at all in them to regular tyres. The only difference is when you start the car in the morning and the temperature gauge is reading 6 degrees or lower outside there’s a bit of a feeling of reassurance. 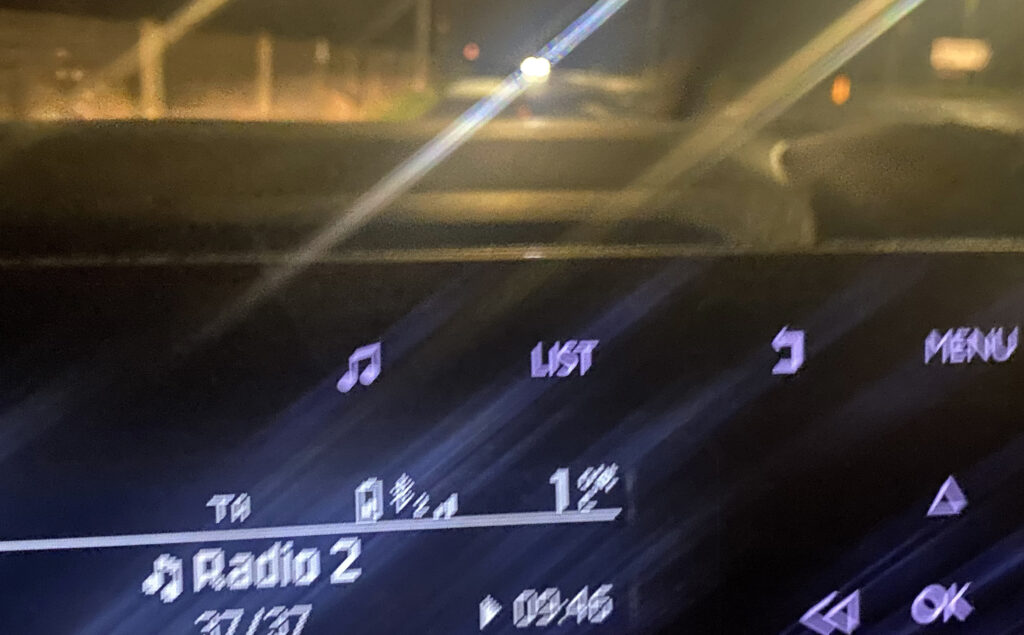 The temperature outside at 1 degree is a warning that road conditions could be poor. Photo – Brian McDaid.

When temperatures fall below 7 degrees the compound on regular tyres become colder and less effective than at higher temperatures. A winter tyre is designed to work better at lower temperatures. You still won’t find any difference driving a winter tyre below 7 degrees even though it is working better. But there is that reassuring feeling. Winter tyres clear the water away better to make a better contact with a wet wintery road, even standing water along the roadside doesn’t seem to pull the steering wheel at all.

This year I took up an offer from one local company that advertised that they would fit you winter tyres and store your regular tyres until you’re ready to change back when the weather gets warmer.

Ulster Tyres in Letterkenny offered this service to their customers when I bought two winter tyres (with the three snow peaks symbol) to replace my 195/65/R15H on the front, The front tyres do the most work on my vehicle because it is front wheel drive. On a back wheel drive car like a BMW or some of the Mercedes it would be better to get 4 winter tyres to cover steering and the biggest percentage of braking on the front wheels along with the power to drive the car forward going to the rear wheels. 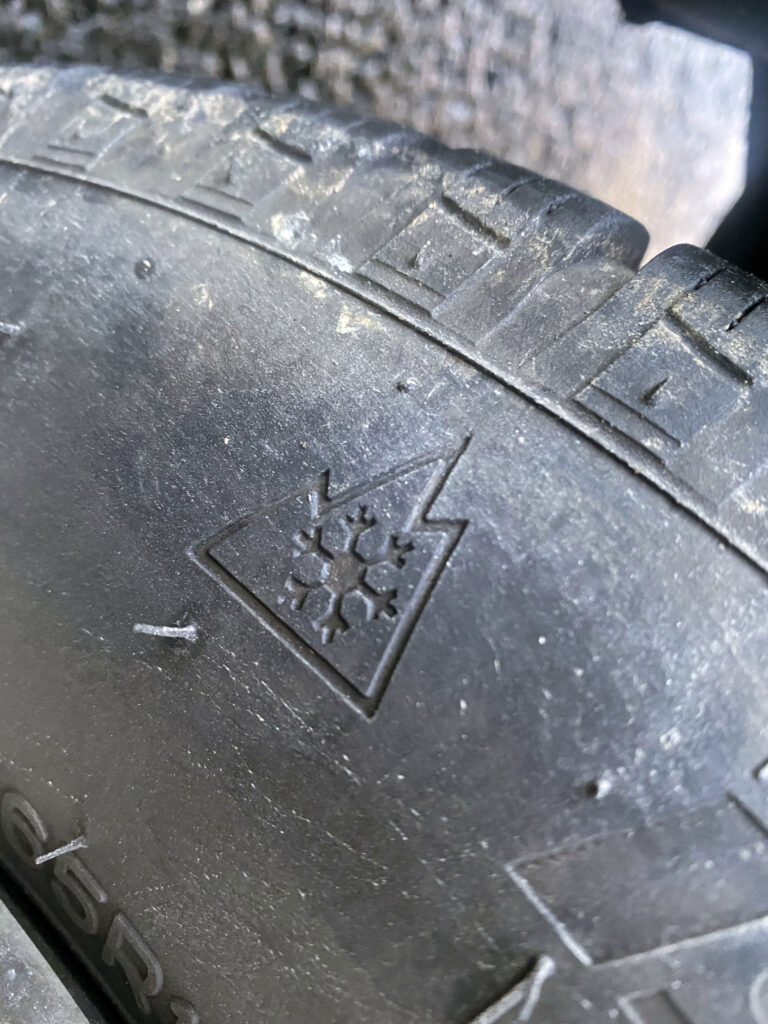 The three peaks symbol on all weather tyres that give you that extra bit of grip in the winter months. Photo – Brian McDaid.

Then the snow came.

We weren’t right into the first few days of the New Years when the snow finally arrived. Well it wasn’t really snow that we got but a very heavy fall of hailstones just as rush hour happened early one morning. In a town like Letterkenny with all its hill and private roads in and out of estates that are not treated by the gritter, the town soon comes to a standstill as cars fight for traction.

In my case it was grip going down the hill on a packed in fall of frozen hailstones, I seen the time that I would be brake testing or spinning the wheels to see how slippy it was. Now, when I have the experience of bending a good few front wings, wheel Rims, front bumpers, headlights, I was happy enough to find the fresher snow and let the cross pattern of the winter tyre find the grip for me.

As soon as the snow arrived it was gone again and for those that think that fitting winter tyres in Ireland is a bit pointless they might feel that their point of view is the correct one. 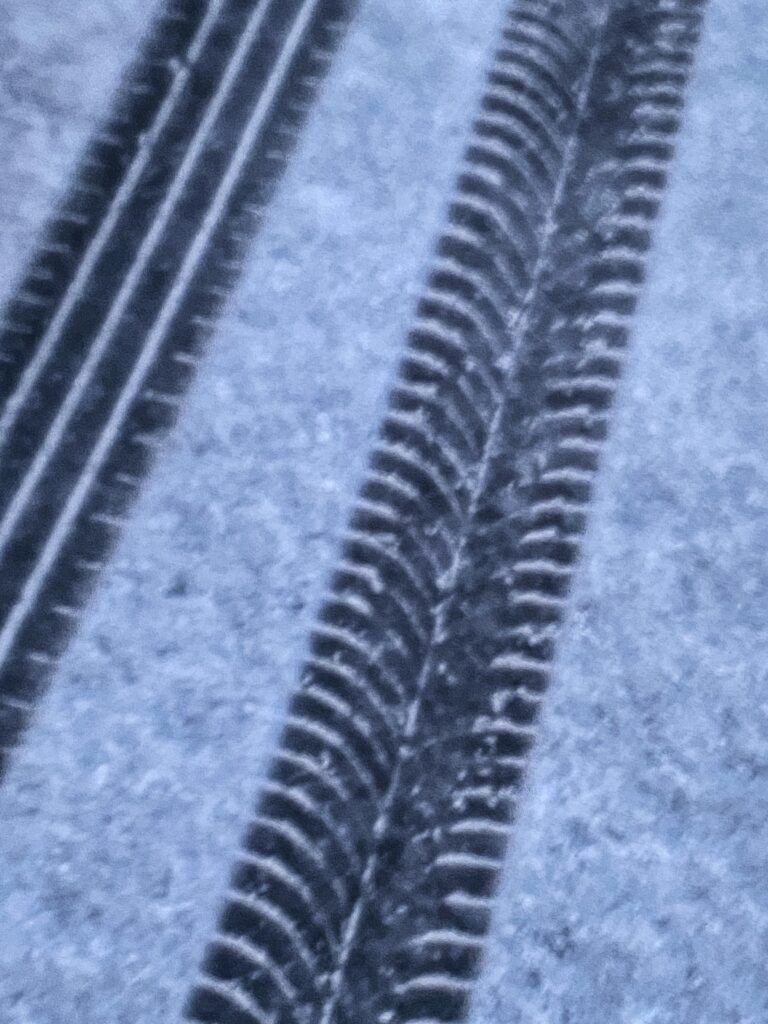 The two different tyre patterns of two tyres in snow with the one on the right an all weather tyre giving the better grip. Photo – Brian McDaid.

But the danger of not seeing picturesque white roads is that when it is not snowing and the roads seem to look the same as they look in the summer, only a bit darker, a bit wetter, maybe a bit muckier and most importantly a good bit colder.

A winter tyre is effortless in doing the work it’s designed to do. For me it gives me a feel of more confidence when I’m braking or turning on winter roads.

If you decide to fit winter tyres it doesn’t mean you are superman or wonder woman on the road, you have to play your part as well. The biggest single thing that a driver can do in winter is to reduce your speed, plan a little more time to do the journeys you regularly do.

Keeping your distance to the car in front of you gives you that extra small window of time to react. Have the least amount of distractions around you when driving in winter weather, good clear windows before you head off are a big help. And one action to consider above all others in very wintery weather is to decide if you need to make that journey at all.