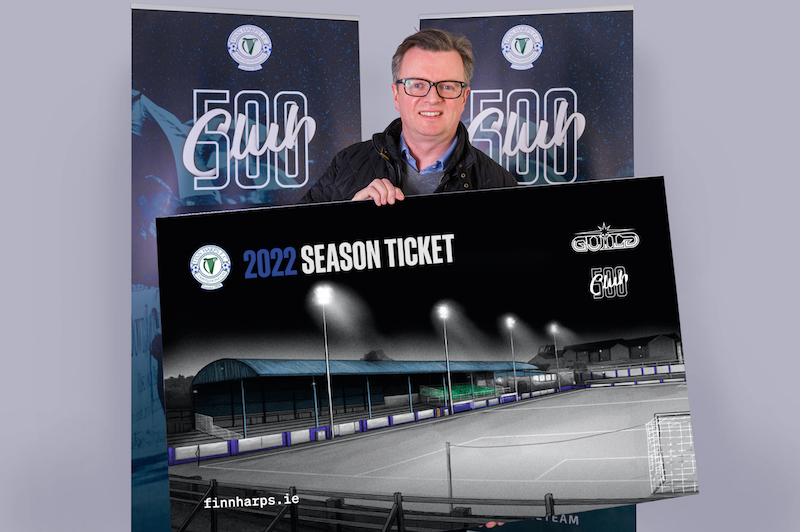 Finn Harps have announced a restructuring of the club with a new chairman in the form of Letterkenny-based businessman Ian Harkin.

Ian Harkin is founder of Donegal-based Arklu Ltd who created the internationally successful Lottie Dolls and is originally from Ballybofey.

The new chairman has been a life-long Harps fans and being the son of a former manager and chairman, he is delighted at the new appointment.

He said: “Having grown up less than a mile from the ground and with my dad (Alex) being actively involved in the club for as long as I can remember, I guess serving the club is something I too also wanted to do.

“I served on the board for two years over 20 years ago as Assistant Treasurer and Treasurer, I have lived abroad for the vast majority of the time since then.”

Harkin called on fans to get behind the club ahead of the 2022 Premier Division campaign.

He added “For anyone who knows me I’ve always held the view that the key to sustainable football is season tickets, football has so many variables from table position to weather or health restrictions, to be able to plan and budget we need to provide more security to the club, in return the club provides a decent discount on that upfront commitment.

“As a fan-owned club, our strength comes from our ability to pull together from the players and staff on the pitch, to volunteers and supporters on the terraces and further afield.

“In recent seasons fans have got used to buying the match night tickets online, now you can buy your season ticket with ease on our store, you will receive an immediate barcode which will provide access to the ground and a credit card sized season ticket available for collection. Take pride in your team from Donegal and buy a season ticket today.”

Vice Chair will be filled by Ivan Harvey, who will maintain his role as Infrastructure Officer.

Kathy Taaffe is returning as club secretary and can be contacted at secretary@finnharps.ie. Lorna McHugh is to continue as club Finance Officer, assisted by a team of trusted and skilled volunteers.

Aidan Campbell is once again appointed Commercial and Marketing Officer. Supporters are urged to get involved and assist the commercial team in identifying potential sponsorship or partnership opportunities by getting in touch at commercial@finnharps.ie

Aidan McNelis has the role of Engagement Officer, seeking to deepen links within the county and promote the role that Finn Harps has to play in the Donegal community. James Rodgers returns as Youth Development Officer as the club looks to build on recent successes at Academy level and the pathway into the senior team.

Incoming Director and current Media Officer Ethan Lee will act as the club Communications Officer. All media queries should be directed to media@finnharps.ie. Fellow newcomer Thomas Keys has been appointed as Fundraising Officer. As a fan owned club, fundraising is vital to our success and will require the support of fans near and far. Contact fundraising@finnharps.ie to volunteer to help, or to bring forward any suggestions.

Long-serving Chairman Sean Quinn has taken the decision to step down from the board after many years of dedicated service. Quinn will still be a regular around the clubhouse and will continue to support the current board wherever possible. Everyone at the club wishes to thank Sean for all his hard work over the years.