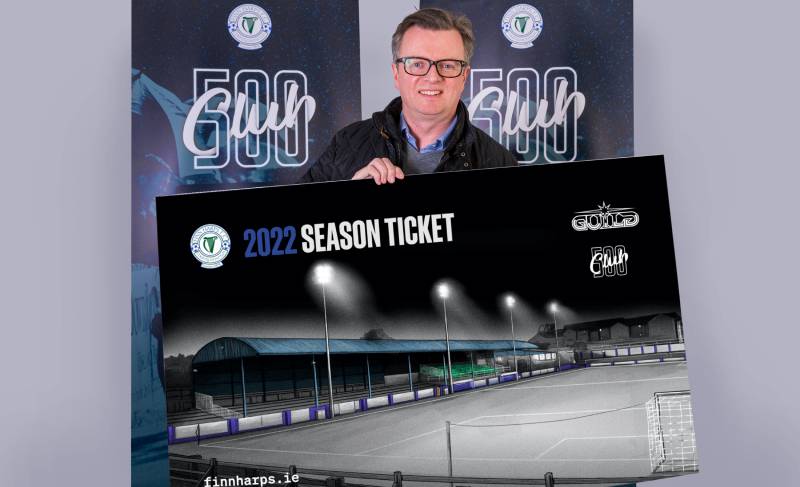 Finn Harps announced on Wednesday a restructuring of the club with a new chairman in the form of Letterkenny-based businessman Ian Harkin.

Harkin is founder of Donegal-based Arklu Ltd who created the internationally successful Lottie Dolls and is originally from Ballybofey. He spoke to Donegal Daily to give readers a chance to get to know the new chairman.

Could you tell us about yourself and what you’ve done in your career?

I attended LYIT then worked in accounting practices initially in Brian McDaid’s in Ballybofey, then in Galway and Derry before heading to Australia in 2000 working for the Australian National Audit Office. I then spent a year travelling after that and ended up in London.

A guy I had met in Australia contacted me asking for help to do his accounts so I was doing that in the evenings, when he needed funding I helped him pitch to private investors, part of the condition of the investment was that I would join him in business so I bought some equity handed in notice and we built that business to one with over 30 employees in Hong Kong, London, New York and China. I sold my shares in that in 2010 after my fiancé at the time passed away from cancer, I recall receiving a condolence card at the time from Finn Harps, you remember things like that.

In 2011, I formed a company in London with a friend and we developed a doll to celebrate the royal wedding, we launched it in Hamleys toys store and it was insane, all of the worlds media was in London for the royal wedding that week and they were looking for stories. We had 13 TV interviews and syndicated press sent our story to pretty much every major news outlet around the world, we donated most of the profits from that to the RNLI. As we were doing that we were working on our own doll called Lottie. Lottie launched in August 2012, it needed investment so I sold my house in London, bought out my cofounder, invested the remainder in the business and moved back to Donegal. We design Lottie here in Donegal, manufacture in China and we have a network of 20 distributors that sell Lottie in over 3,000 stores across 36 countries, we also sell Lottie ourselves on Amazon and on our website.

You’ve only recently joined the board again, so it must’ve been great for you to become the chairperson so quickly on from that?

I  was on the board previously for a few years in the role of assistant Treasurer and Treasurer I think it was 97 & 98 before I moved to Galway. I was very young at that time, but I had played for and been treasurer of Cappry Rovers for a few years prior to that working with Peader Duffy, Niall Patton, JW McNulty and Tommy Gallen. Cappry is a great club, and those boys are sharp, you learn quickly. It’s hard work especially in the role of Treasurer and Secretary, my dad was secretary of Finn Harps for over 20 years, so I got to see first-hand the work that Lorna McHugh as Treasurer and Kathy Taffe as secretary now do for the club and its enormous, we are very fortunate to have them.

Have you been a fan of the club for a long time?

Yeah I grew up following Harps, one of the first clear memories I had was going to the Celtic match in 1983, which turned out to be Charlie Nicholas and Billy McNeil’s last match for the club. Nearly every kid in our town was at that game, we all sat inside the fence on the pitch, I used to follow Liverpool before then, I could recall friends that day supporting Celtic and from that day forth, I stopped supporting Liverpool, Finn Harps is my team. As a kid I was fortunate, my dad brought me to pretty much every ground in Ireland, a lot of them were over nighters and the craic was great. I would have got to know quite a few of the players and board members, Finn Harps is and always has been a big family. We are the only club with the name of the county on its crest, we have supporters in Tyrone, Derry and Fermanagh too but we are extremely proud to be represent Donegal in the top football league in our country.

What was it that made you want to join the board now and who were the people who helped you on the way?

I’ve obviously been following Harps when living abroad and since I returned. If you ever do a term on the board, I don’t think your brain ever completely switches off from the club, there are always things spinning away in the background about how could help or do things differently. I guess there’s no point having all these opinions if you aren’t prepared to put your hand up and do the work yourself. I’m not sure if there is ever a right time to do something like this.

There are some amazing people in the club, every time I met Sean Quinn he was asking me if I was interested in going for the chair. It’s been a few years since he asked, the same with Derek Wilkinson, they are unbelievable servants to the club, you see people like Charlie McHugh, Billy Vance, Gerard McHugh, James Rodgers, John Campbell who have dedicated decades to the club voluntarily, so maybe it was time to put the hand up again. We have a great board right now and beneath the board there are support teams and honestly, the quality is phenomenal, some roll up their sleeves, some have that sage-like wisdom, planners, doers, we have a great mix. I’m excited to be honest, you need that mix of personalities.

What specific goals are you wanting to accomplish in the short-term and the long-term?

The main things I want to look at are:

Anyone who has been to Finn Park over this past number of years will have noticed the change in the level of performances, behind that though is a management team that works incredibly hard, the players are given everything they need from strength and conditioning, to physio, video analysis etc., we simply cannot afford to go full time at present but it is incredible what is being achieved with the limited financial resources we have.

Ollie has done phenomenally well, when you see the effort he puts in it is beyond comparison in our league and he still has a full-time job outside of the club. The 500 Club has helped the manager enormously over these past few years and the return is there for everyone to see, all those funds go directly into the first team.

I was recently invited to meet all of the people in the academy, and they did their presentation to the whole management team. Kevin like Ollie bleeds blue, Harps to the core.

The academy is so impressive, 20+ years ago the Academy was being discussed as something we’d like to do, now we have nutritionists, sprint coaches, defence coaches, attack coaches, physios, strength and conditioning experts, video analysts and an amazing backroom administrative staff.

It is also self sufficient, it raises its own funds separate to the club and is assisted by the FAI. It is proper Elite what is missing however is the centre of excellence, we have great temporary facilities in Killygordon but the end goal is to have our centre of excellence surrounding our new stadium to benefit the Academy and the first team.

Our academy hope to reach out to Donegal League clubs this year offering training programs to their coaches, we want to give back to the footballing community in Donegal, a rising tide lifts all boats.

Inflationary pressures on the construction industry, the FAI’s recent financial challenges and the significant number of projects on the council’s plate have delayed progress on the stadium, however, we as a club and anchor tenant must now take leadership on the project begin our fundraising and restart works as soon as possible. We will be building an asset which will be owned by the council for the people of Donegal, one that will be the envy of the footballing community across the island.

We will be reaching out to our business community pre-selling 10, 5-year Corporate Packages (10 seats) as well as the naming rights to the stadium (5 or 10 years), we will also be selling 200 3-year premium seats. We will be asking Donegal people living here in Ireland and further abroad for their help. Later this year we will be running a development draw and a GoFundMe campaign. We have been given a derogation on our licensing for quite a few years, that will end soon if we don’t start making progress so I am making the commitment to start works again in 2022 not out of hope or desire but out of necessity.

Establishing the women’s team and all the underage girls’ teams is key for me, it’s not just something morally that we must do, its compulsory and our licensing is dependent on it. This also emphasises the need for the centre of excellence to accommodate the increased resourced required for the additional teams.

Finally and probably most importantly I want the club to be sustainable, to do so we need to build a culture of season tickets in Finn Harps. Running a football club is extremely difficult, weather, form, health restrictions etc., there are so many factors that affect attendances and therefore cashflow of the club.

A season ticket offers the fan a discounted price and the club the ability to plan. In the UK the most common method of identifying a fan was whether they were a season ticket holder or not. I’d like to ask our fans to come out and support us and buy a season ticket. In recent seasons fans have got used to buying the match night tickets online, now you can buy your season ticket with ease on our store, you will receive an immediate barcode which will provide access to the ground and a credit card sized season ticket available for collection.