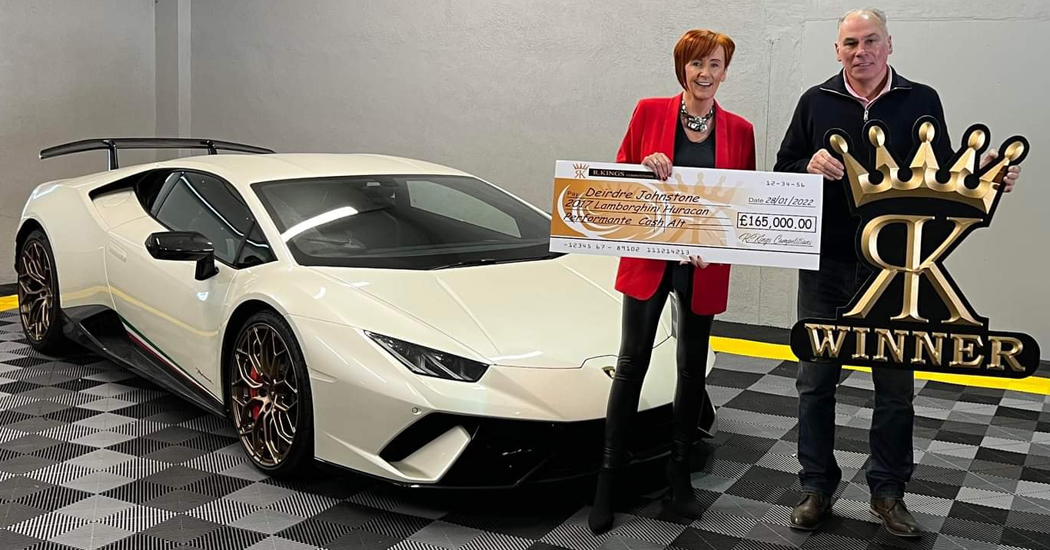 Donegal woman wins a Lamborghini… and hands back the keys for cash!

A very lucky Donegal woman has scooped a massive cash windfall after winning a Lamborghini sportscar in an online draw.

Deirdre Johnstone from Ramelton was the top winner of the biggest draw of the year so far run by online company R KINGS Competitions.

She won an impressive white Lamborghini Performante, but instead of taking the sportscar, she took the cash alternative of £165,000 instead! Deirdre took the “sensible” option of seeing a financial advisor to help make the most of her life-changing win that’s worth almost €200,000.

Deirdre had originally bought the raffle ticket for her husband Paul, and the couple are over the moon with their winnings.

Deirdre and Paul join a long list of winners of the R KINGS Competitions. The company, based in Northern Ireland, is one of Ireland’s and the UK’s leading independent online competition companies. Prizes range from super cars through to luxury holidays, with more than €47million of prizes awarded during 2020 and 2021.

Donegal woman wins a Lamborghini… and hands back the keys for cash! was last modified: February 11th, 2022 by Staff Writer
Facebook0Tweet0LinkedIn0Print0