Seán Cannon-Earley is Managing Director of Creative Campaigning at Teneo, a global consulting and advisory firm.

A Dubliner born and bred, during the second wave of lockdown in early 2021, he was given an extended opportunity to live and work in Donegal and hasn’t looked back!

Seán’s new hybrid working approach in Donegal has reaped dividends both personally and professionally and the adopted Ardara man also shares some very insightful views on how strong connectivity in Donegal is changing the landscape of rural Donegal.

“Okay wait until you’ve enjoyed and endured a Donegal winter and if you feel the same, we’ll relocate.”

These were the wise words of Seán’s Donegal born wife Mary when he outlined his Donegal dream on New Year’s Day 2021.

They both agreed to give it a try and while Seán was developing strategies for blue chip clients such as Irish Distillers, Allianz and Chadwicks Group, his wife Mary was also busy virtually teaching her South Dublin students. This was all from his in-laws’ home in Lettermacaward.

Seán and Mary wintered well in Donegal, enjoying the fresh air, dog walks along the beach in Narin and finalising finances for their new home.

“We both realised that relocation was an option that worked. When our mortgage approval came through, we had the choice between a one-bed terrace in Rathmines or a town house in Donegal.

The decision wasn’t that difficult to make’’ explains Seán.

After some enquiries and negotiation, they secured the perfect home, a town house originally owned by two different generations of Mary’s family. Mary’s grandfather was Mick Kennedy, who once ran the family business, Kennedy of Ardara, producing handmade woolen garments from their very home and with their own list of international clients, including Macy’s and Bloomingdales in New York.

“Although not involved directly in the business, it was really lovely to bring this property back into the family for us,” said Seán.

While working in Ardara, Seán secured a promotion to Managing Director last year. Reconnecting with nature, having increased space both at home and outdoors, coupled with a majestic backdrop are all factors which he and his employer believe helped to inspire continuous creativity.

Additionally, many of his clients have increased their digital focus, meaning Teneo are busier than ever. With international restrictions slowly easing, that now results in more travel for Seán, who this year will travel to Dubai, New York and Brussels for client workshops.

“Having the airport nearby at Carrickfinn and with the new Emerald Air route to Dublin, really helps connectivity. I can travel from Carrickfinn via Dublin, directly to wherever I need to be. Fundamentally more travel isn’t a barrier and my employer has been very supportive, enabling a flexible working approach.”

When asked what the challenges have been for a city man to relocate to Ardara, he genuinely struggles to think of a downside. 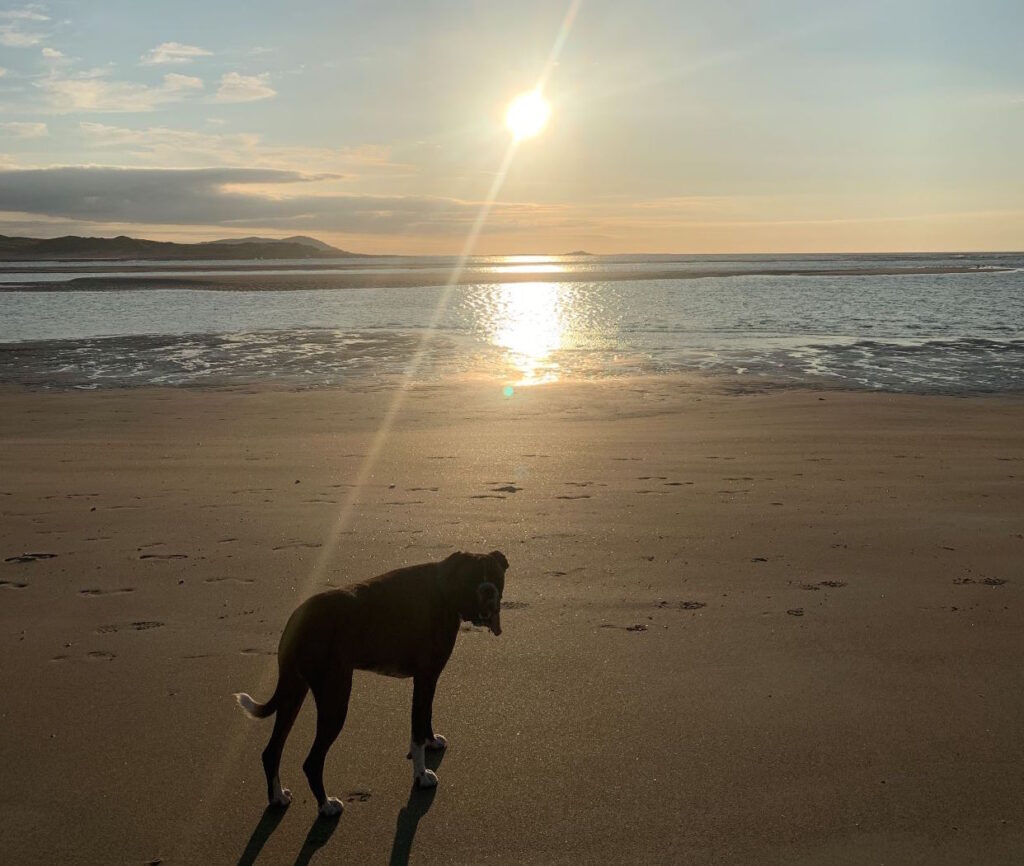 It’s a ‘ruff’ life on the beach in Donegal!

“There is such a strong community spirit here that you just don’t get in bigger cities. When we’re out walking in the evening, it feels like the whole town is out and everyone is genuinely interested to see how we’ve settled in and how they can help. The old school barter economy is alive and well in Donegal, which all adds to the sense of community!”

Seán has spoken of at least four other contacts he knows who have made a similar move to rural villages like Ardara in the past two years.

Considering the population of Ardara in 2016 was 732 and with new investment and visitor attractions coming on board, this certainly bodes well for the region. Donegal’s connectivity is enabling a generation of young professionals choosing a different career and lifestyle choice by relocating to the North West.

A Christmas present from his wife also brought up some interesting findings for Seán. An ancestry kit revealed 75% Donegal in his family lineage, giving further justification to his move and helped to reconnect with a distant relative in Downings.

Seán Cannon-Earley can now literally claim that ‘Donegal is in his DNA’.