An Chúirt Hotel in Gweedore was the venue for Tuesday night’s launch of “Climb Errigal Together” which takes place on Saturday, April 2nd.

Headed up by Donegal County Councillor, Ciaran Brogan, the event is being organised as part of the fundraising campaign initiated by former RTE journalist, Charlie Bird, who was diagnosed with Motor Neurone Disease four months ago.

During an interview with Ryan Tubridy on the Late Late Show in January, Mr Bird said he will climb Croagh Patrick in Mayo on April 2nd with family and close friends in aid of the Irish Motor Neurone Disease Association and Pieta House.

MC for the local launch, Damien Ó Dónaill, said that Mr Bird’s appearance had probably been one of the hardest things to watch.

“But I think when he spoke on the second night of The Late Late Show, it gave people a little more courage and a little bit hope,” he added.

Damien explained that subsequently, the pair had been in regular contact and that Charlie was keen to attend the “Climb Errigal Together” launch.

“Charlie wanted to be here, but because of circumstances, he couldn’t make it. The phone beeped at ten to six this morning and it was Charlie asking me what did I want him to say,” he added, before playing the video message on the large screen.

In the video, Charlie said: “Hi to my Donegal friends. I’d like to wish you all the very best in that beautiful part of the country. Thank you from the bottom of my heart for all your support. Many people are suffering, and I hope this event, along with the many other events on the day, will give people a lift and some hope. Good luck to everyone on the Errigal Climb on April 2nd and thank you for the effort in making this happen. Thanks for extending that hand of friendship.” 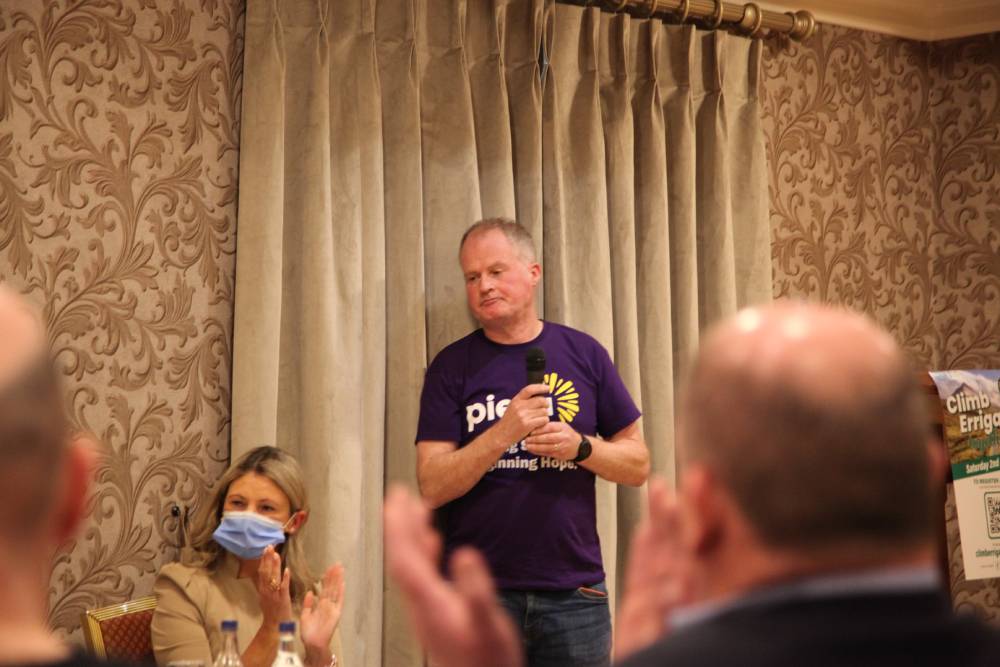 The MC said he’d often spoken at similar events in the past, due to his work with Radio Na Gaeltachta.

“Unfortunately, tonight is very different for me and us as a family. Our own Dad, Stephen, was diagnosed with Motor Neurone Disease as we approached the summer season last year. To be very honest, it was a massive blow. I think when we left Beaumont Hospital that day after Dad’s consultation with Professor Orla Hardiman, we probably knew our lives had changed forever.” 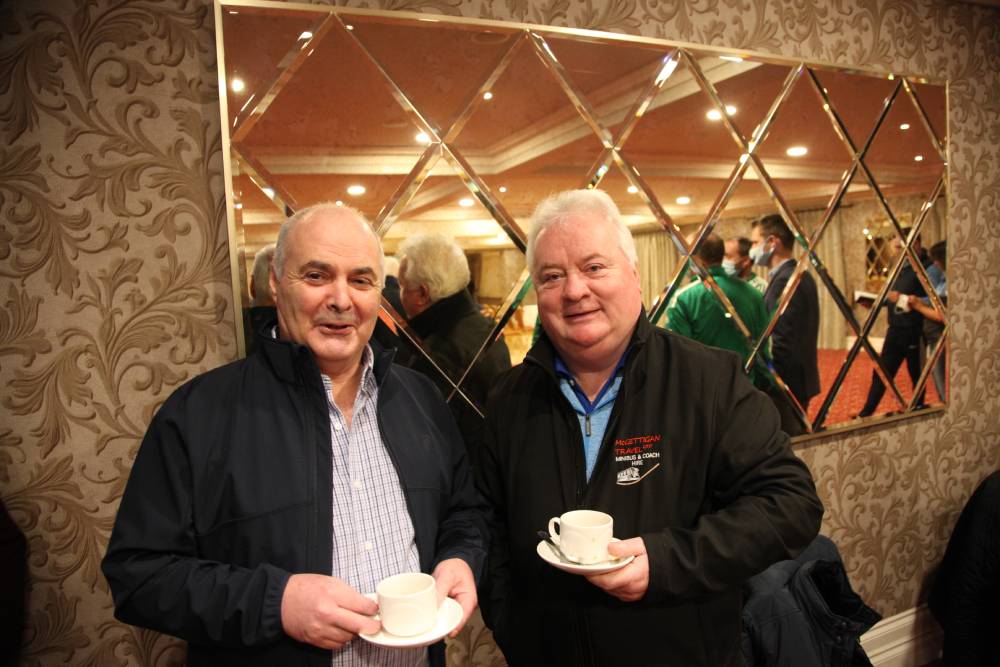 He continued: “At the time, a very good family friend of ours, Vincent O’Donnell, was living and fighting this awful disease. Sadly, Vincent passed away on June 20th, 2021, with Motor Neurone Disease. A lot of us in the room know who Vincent is and I’m glad that Vincent’s son, Rory, is here tonight.

“Rory had been on this journey and he knows better than all of us what it is like. Before his father’s diagnosis, we knew very little about Motor Neurone Disease. Since last May when we attended Beaumont Hospital, we have heard so many stories from everywhere.

“Sean Diver, a former colleague from RTE Radio Na Gaeltachta, is travelling tonight from Beaumont Hospital back to Gweedore with his wife, Sarah, who was diagnosed with Motor Neurone Disease four months before our Dad. I met Sean for a coffee on Friday and he wanted to send his best wishes for tonight. Himself, Sarah, and their family are delighted that such an event is happening, and he said that Sara had promised she would be at the foot of the mountain on April 2nd.”

Event organiser, Cllr Ciaran Brogan, extended his thanks to all who had helped to date with the event. 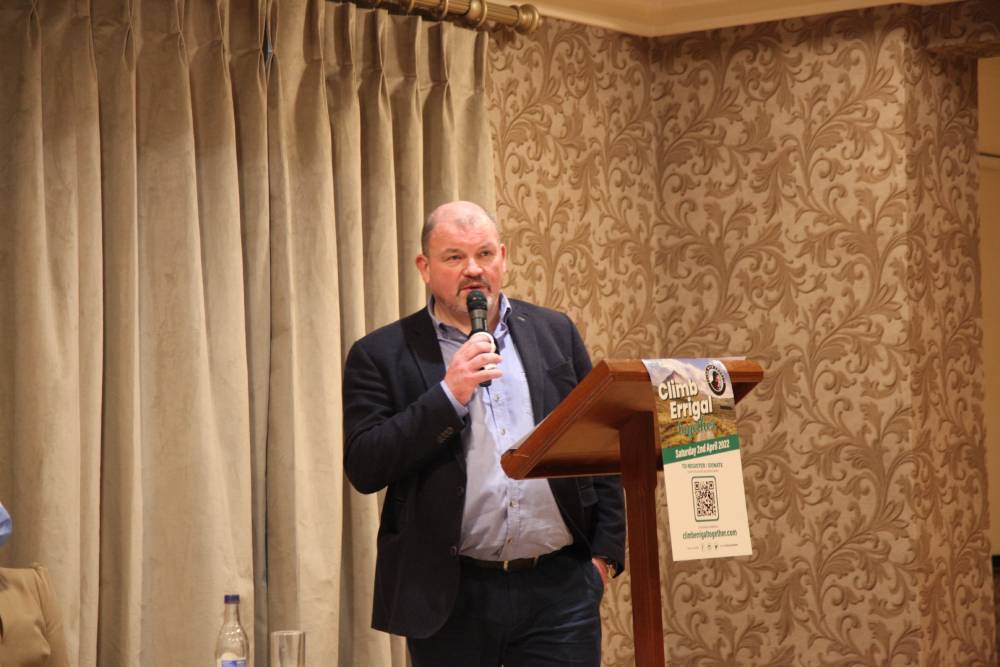 “I knew the logistics of this were going to be huge and I want to thank Eamonn McGee for taking on the role as lead coordinator. He’s very experienced running rallies all over the country. He has put in a huge amount of work and it’s about everyone coming together and playing their part.”

“I think the Donegal togetherness will be very strong on the day and it will be a great community event. We’re all here as part of a team and hopefully, we can gather more people to be part of that team and get as many people involved as possible. Hopefully, on the evening of April 2nd, a lot of money will have been raised for the charities and there will be a real feel-good factor about after staging a very successful event,” he added.

Event co-ordinator, Eamonn McGee, told the launch that everything on the day will be organised from the Dunlewey Centre. No parking will be permitted along the road for one kilometre on either side of the Errigal carpark, and those taking part in the climb will be bussed to and from the base of the mountain. Teams of marshals will also be located along the climb. 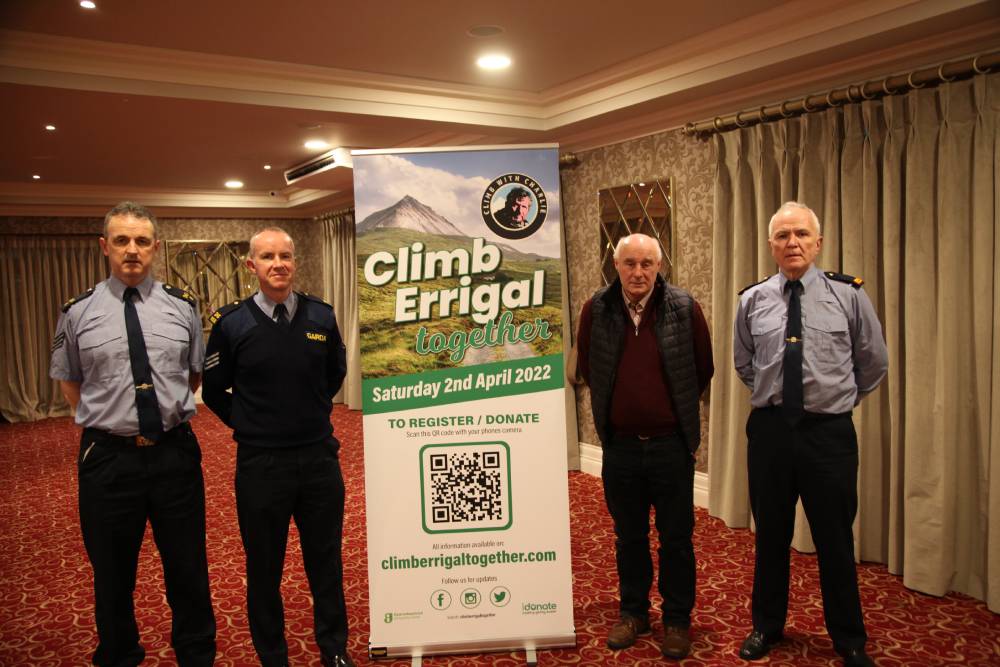 “It’s going to take a big effort and if we can get a couple of bodies from each club it will make it easier to manage,” he added.

Edel Flynn from the Civil Defence said that one of its volunteers in the fire service, John Cunningham, had developed Motor Neurone Disease a number of years ago. 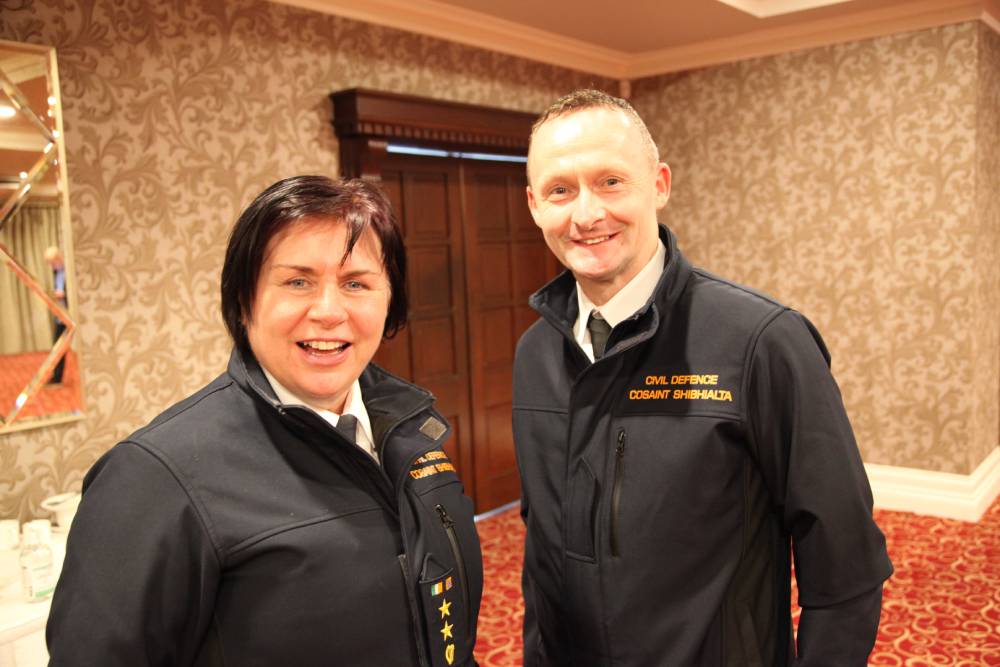 “For John, he thought it was the end. It certainly changed his life. It changed his family’s life and it changed his community around him. We were part of that community. We felt John still had something to give and he continues to give to Civil Defence and to the community of Donegal, because when we’re out on an operation, John is able to do our radios. We’re are hoping on the day he will be able to do that for us.”

Emmet Rushe, owner of Rushe Fitness in Letterkenny, spoke about the importance of preparing properly for the challenge of climbing Errigal.

“By the time you are up and back down Errigal, it’s about 4K and takes an average of about two hours to do that climb. So, what people need to do now is get out and get walking. Start off with a few small walks during the week and then use Saturday and Sunday to get up to that distance of 4 to 5K,” he commented. 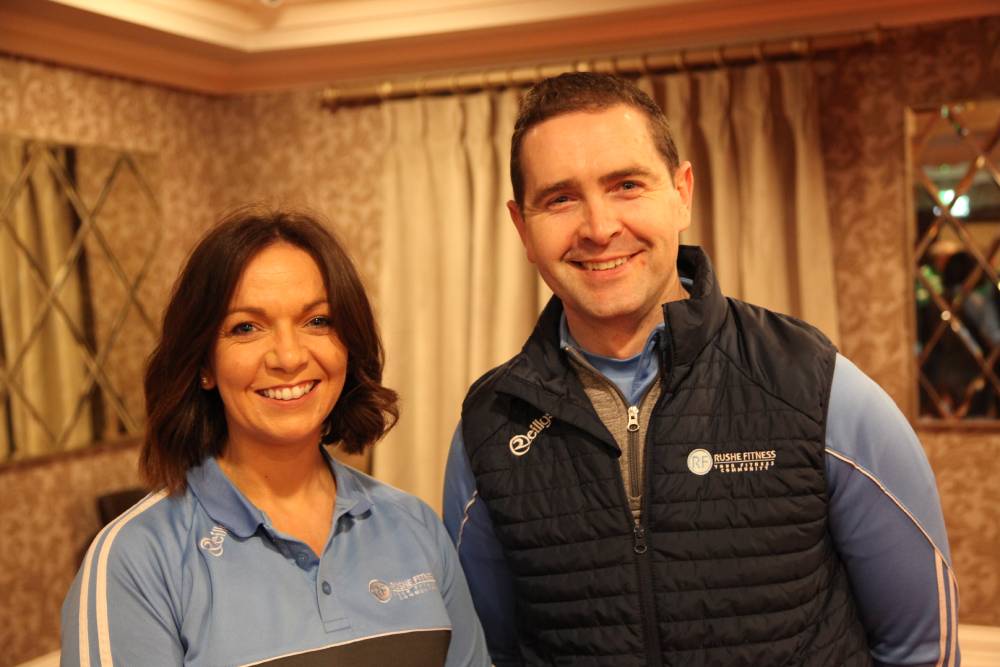 For those planning to bring a rucksack with them on the day of the climb, Emmet advised that they should do the same on their longer training walks. He also stressed the importance of wearing the proper footwear and the proper attire.
Danny Devlin and Margaret Whyte spoke on behalf of Pieta North West, while regional nurse, Eithne Cawley, talked about the ongoing work of the Irish Motor Neurone Disease Association. 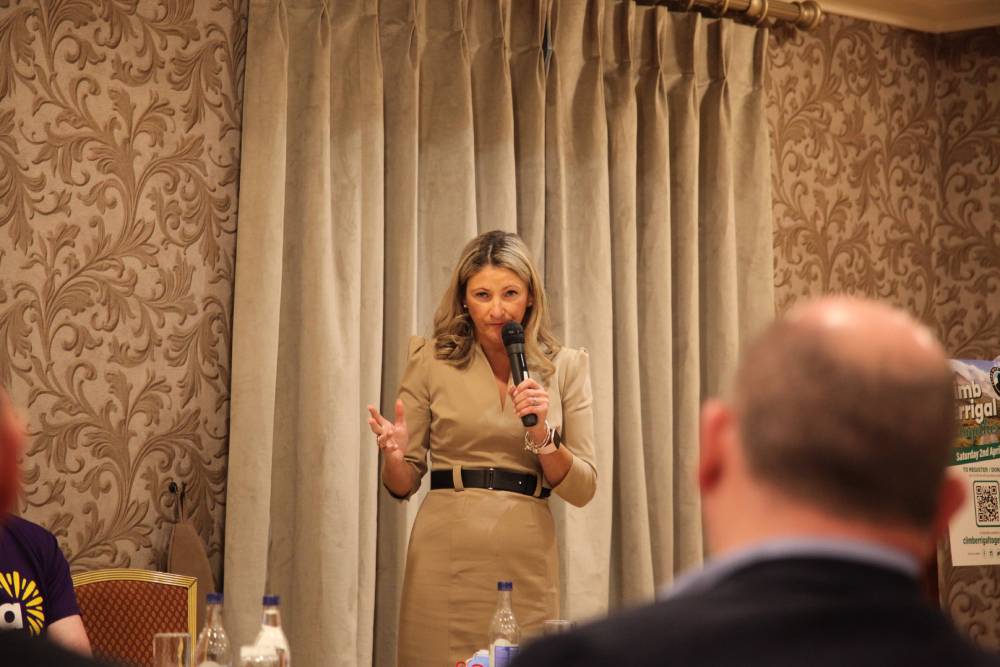 Neil Murray from The Leader, who built the climberrigaltogether.com website, explained how people can register for the climb and donate to the cause. 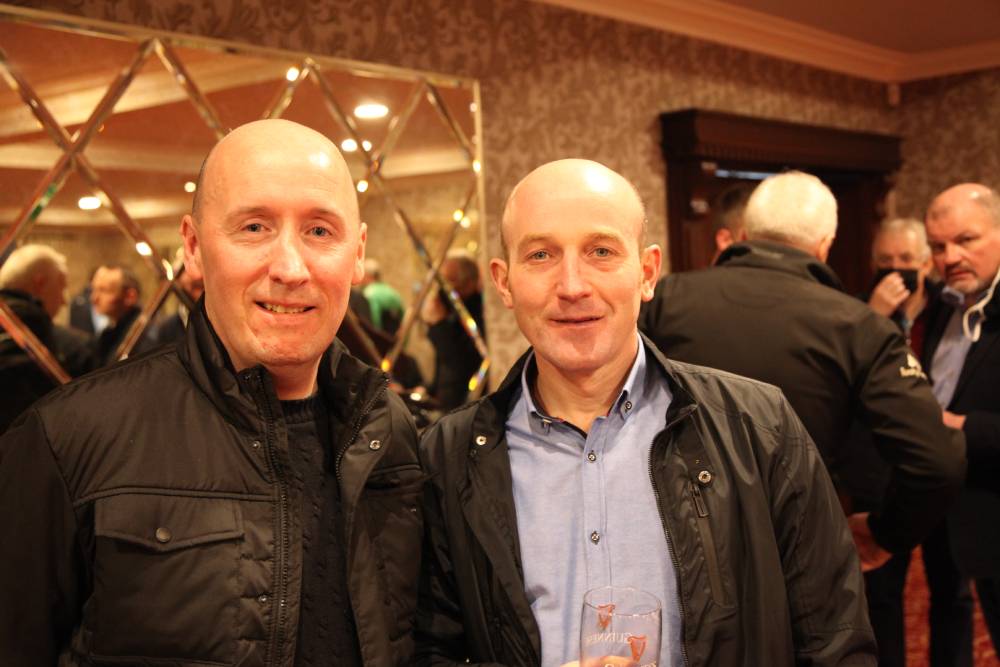 “The most important part of the website is the registration form and it’s very simplistic. It gives options to register as an individual, a family, a workplace, a team or a group of friends.

“Once a person has registered, he or she will receive an email that will contain all the links to the social handles and the website. The second step is the donation stage. So, when the ‘donate’ button is clicked, the official website is linked to the official iDonate website for donations. When donating, there are options of €5, €10, €25, €50 and €100. The most important thing is to complete the registration section first and then make sure the donation is done before the climb. The minimum donation is €2 and if people want to donate a larger amount, they can do so by typing it in.”

“It’s extremely important if you are part of a group that you fill in the number of that group. It’s also important to include the names and ages of the participants so that Eamonn and his team will know how many people will be coming along to climb Errigal on the day.”

To register to take part in “Climb Errigal Together”, follow the link below: https://climberrigaltogether.com/