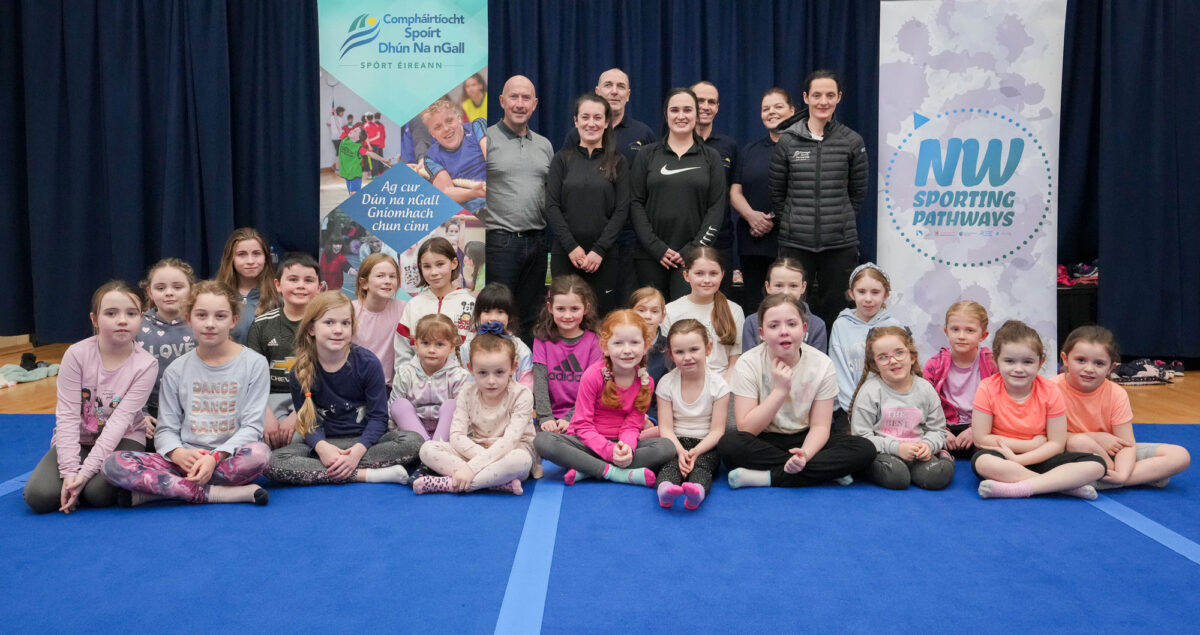 Falcarragh’s Community Centre have received a huge boost with new equipment for the development of children in gymnastics.

Around 90 boys and girls aged 5 to 14 from the local area take part in the weekly sessions held on Wednesday evenings between 5 pm and 8 pm. They complete their training in eight-week blocks, and at the end of each block, they put on a display for their families to showcase their skills. The provision of the latest in recreational equipment will be hugely beneficial to their development. 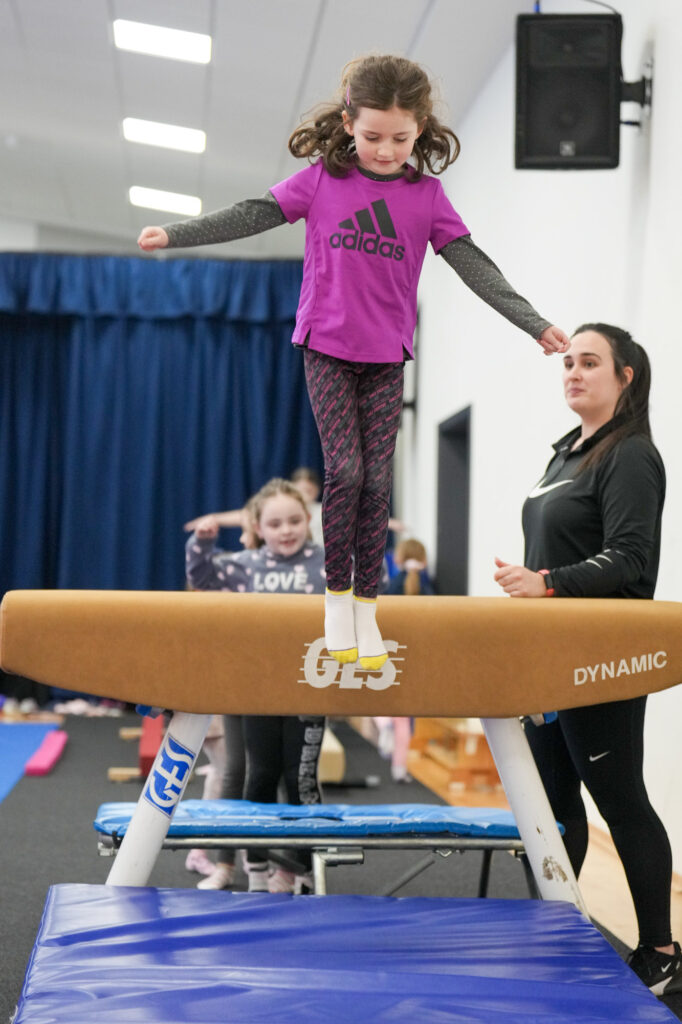 Getting ready for a soft landing.

Maggie Farrelly, Education & Training Coordinator with Donegal Sport’s Partnership’s North West Sporting Pathways Programme, said: “The opportunity to provide the equipment stemmed from one of the main aims of the NWSP programme to support and develop minority sports such as gymnastics in Donegal and in Derry City and Strabane District Council area.” 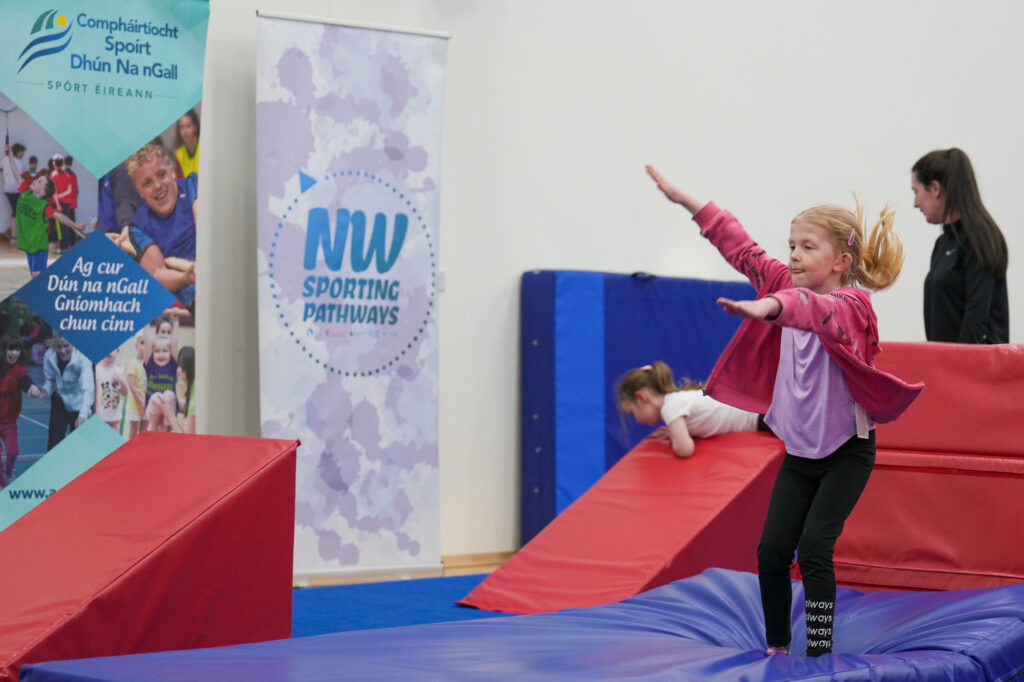 Putting it all together in Falcarragh.

“Recreational gymnastics sessions for children in the centre are being delivered by Natasha McLaughlin from Falcarragh Gymnastics. The centre had limited gymnastics equipment at their disposal for their sessions, and we were able to provide new equipment through the North West Sporting Pathways Programme to help support their setup.

“The children attending the sessions are benefiting greatly as they have been introduced to new equipment such as beams and bars to enhance their personal development,” the Education & Training Coordinator added. 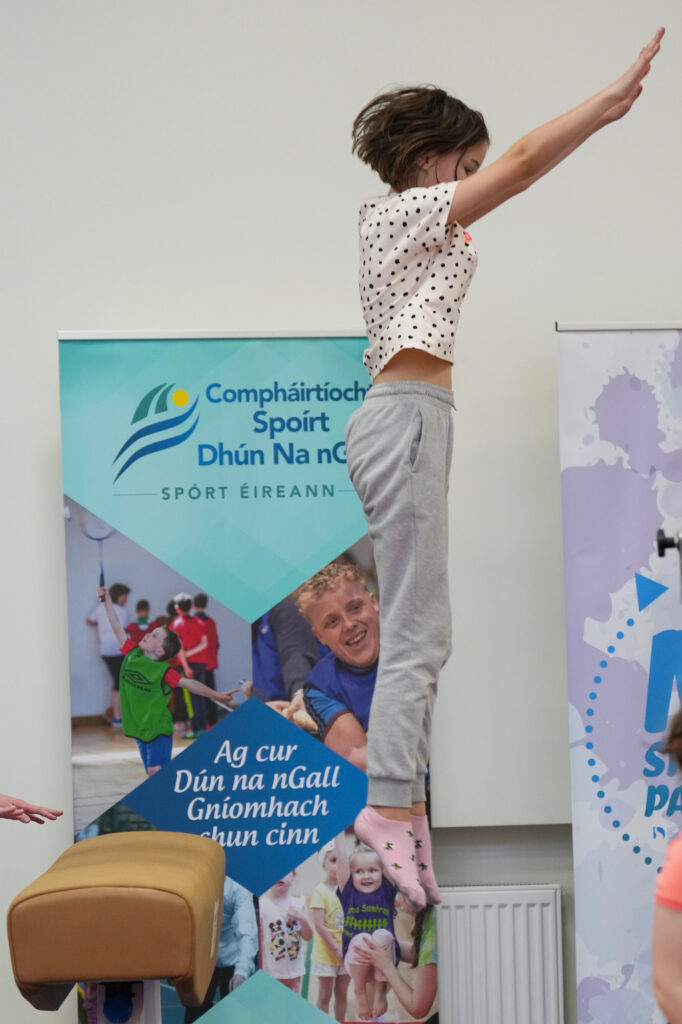 Reaching for the stars at training in Falcarragh.

The centre had basic gymnastics equipment initially when they first started out, as Natasha McLaughlin explained.

“We only had roll-out mats, wedges and small blocks. Now we have bars, beams and vaults which have added so much to our sessions, creating new opportunities for the children to try and explore,” she said. 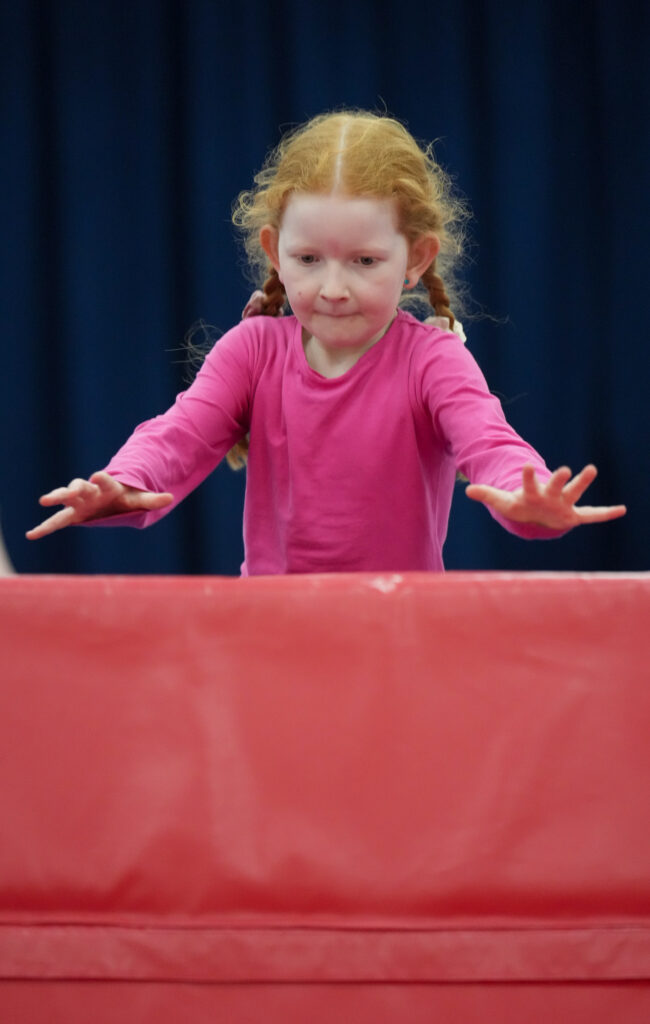 Holding concentration during the workout in Falcarragh.

“It’s great to have a variety of apparatuses for the kids to use and enjoy. We were able to progress our programme further through the introduction of new equipment to the children and to upskill their development, added Natasha, who is assisted each week by Rebecca Gibson. 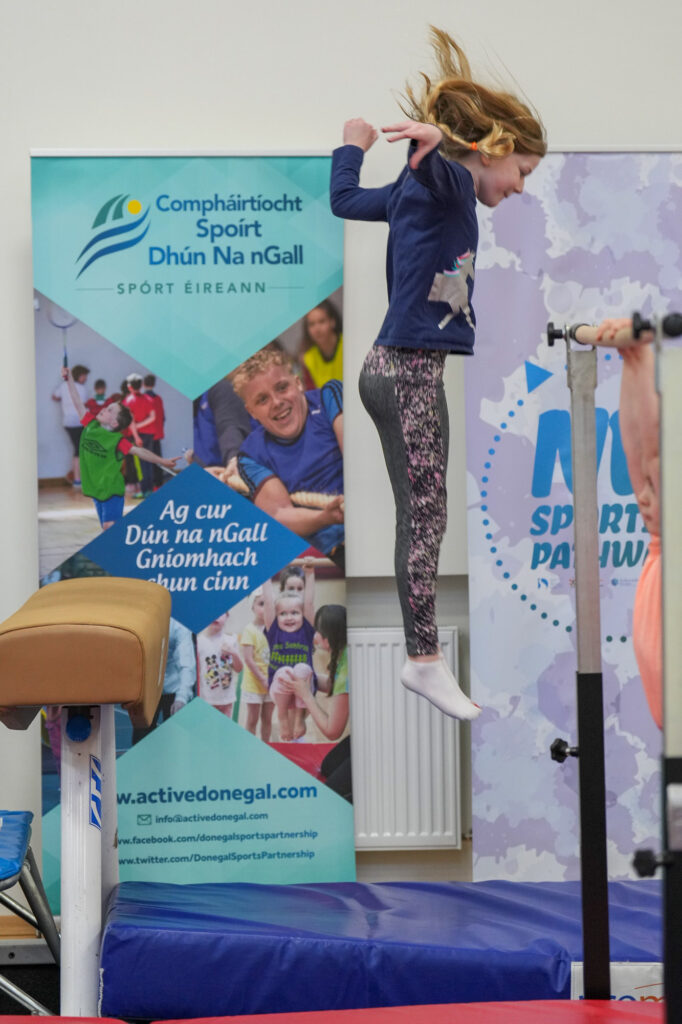 Coming down for the perfect landing.

“It was fantastic to get the equipment sponsored by Donegal Sports Partnership, and the children are delighted with the addition to the gymnastic equipment,” the manager commented. 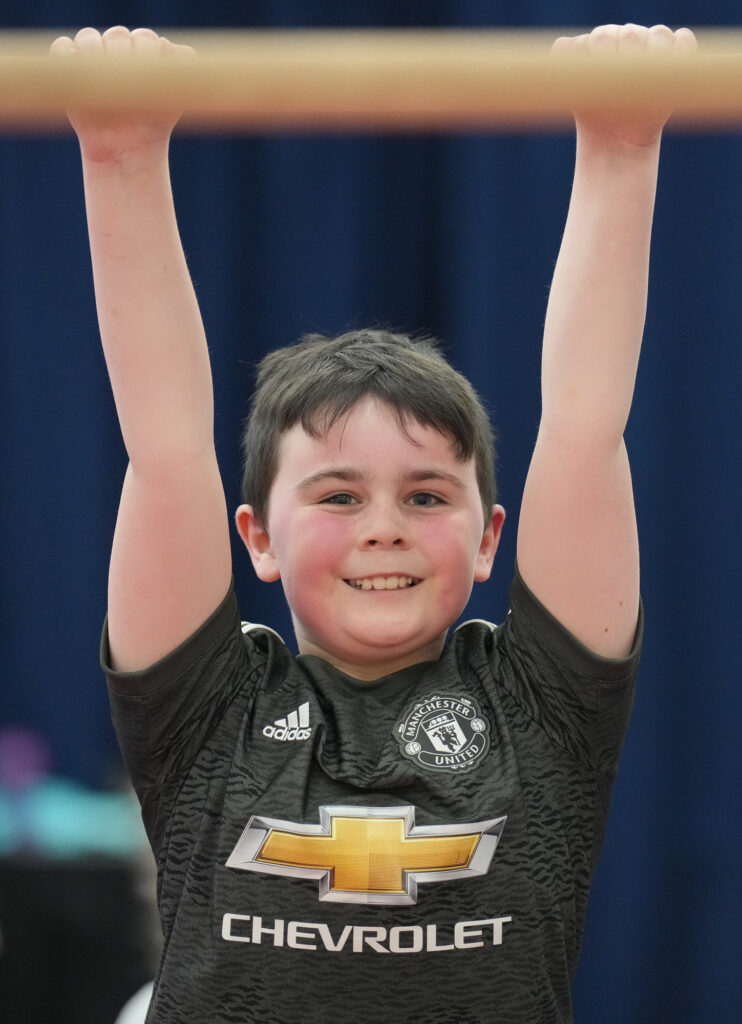 Doing well on the high bar. 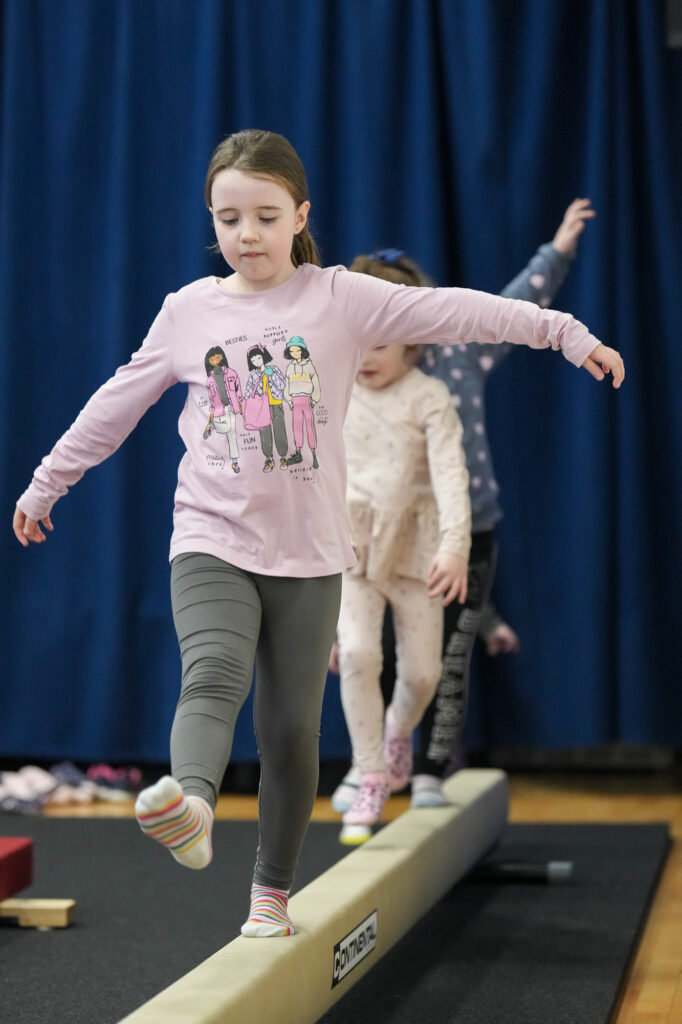 Putting her best foot forward on the beam at the gymnastics session in Falcarragh.

The North West Sporting Pathways Programme is funded by the North West Development Fund in partnership with and supported by the Irish government and the Executive Office. 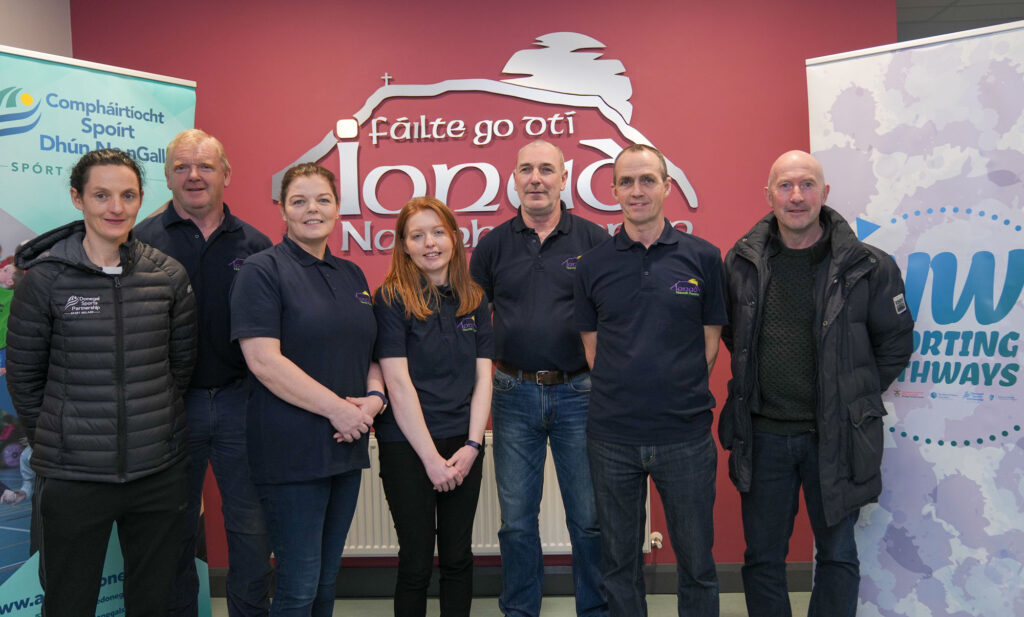