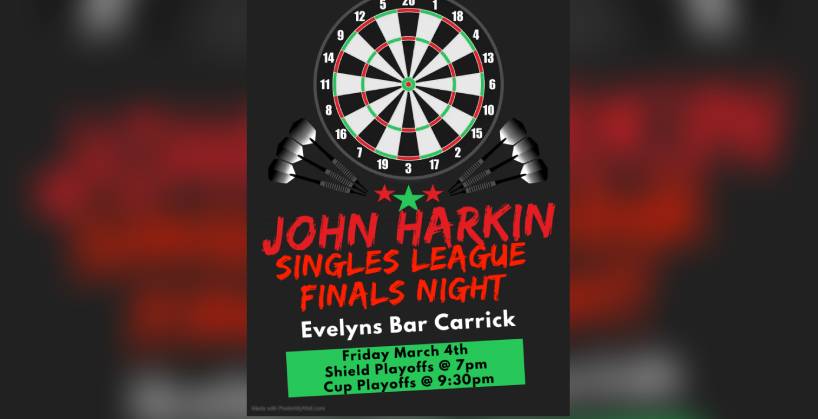 The John Harkin Singles League reaches its conclusion this weekend, 835 days after the first round of matches were played.

The competition was at round 26 in March 2020 when Covid struck, and the remaining matches have been played in the last few weeks since the tournament recommenced in early February.

The play-offs take place in Evelyn’s Bar in Carrick this Friday evening (4th March) with the Shield competition beginning at 7pm followed by the cup play offs at 9:30pm, pairings were made on final league positions.

Andrew Gillespie topped the league with Kenneth Kennedy finishing a close second, Andrew leads the 180s table with 22 from 30 games, and he also has the least darts leg with three 12 dart legs while the highest checkout is a maximum 170 from James Byrne. All welcome to attend.

The full table after 30 games

Semi-final parings will be drawn on the night after the quarter finals finish.

The Leo Molloy is back on Saturday 12 March and with the biggest prize fund yet, this year there is €2,000 in prizes with the winner guaranteed at least €800! Entries and names are now being taken and are to be in before 3pm on the day, registrations in Kilcar House at 3pm with the first games at 4pm SHARP . Enter via the South West Donegal Darts Facebook group or call or text Kenneth at 086 8361698 or James at 086 9969256. More information on www.donegaldarts.com