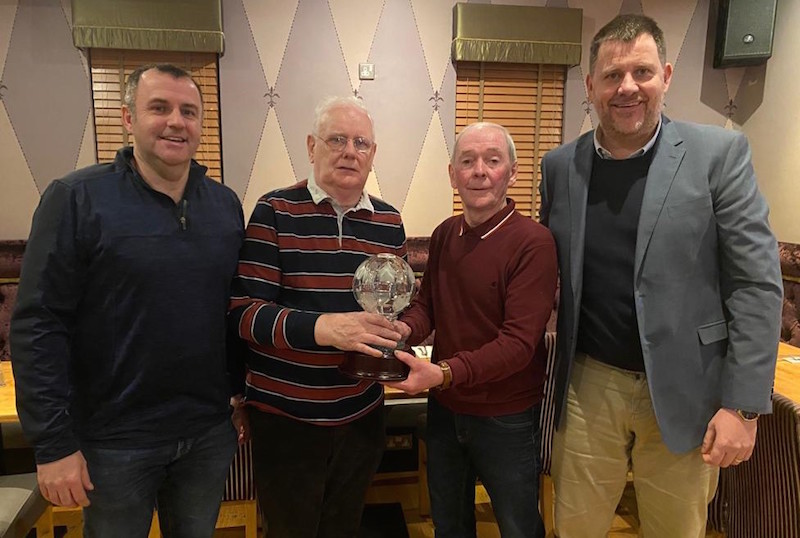 The Ballyraine FC committee made a long overdue presentation to Andy O’Boyle on Friday last to mark their appreciation of his recent fundraising support with their pitch development project.

The presentation was originally planned back in 2020 but due the Covid pandemic was delayed.

Known in local footballing circles as the Godfather of Ballyraine FC, Andy O’Boyle established the schoolboy club back in 1979 and spent over 40 years at the helm with his trusted companion Charlie Shiels by his side for many of those years.

It is a testament to these two men that Ballyraine FC is one of only a few of the original “street league” clubs established in the late 1970s and early 1980s, still in existence.

After securing financial support from the LEADER fund administered by DLDC in 2018, Ballyraine FC launched a major fund-raising effort to help fund the development of the pitch at Orchard Grove.

This first man to come knocking of the then chairman Oisín Harkin’s door, was Andy O’Boyle, offering again to pull on the boots for the cause. Andy joined the fund-raising sub-committee and provided great support and guidance putting to use his years and wealth of experience raising money for sports clubs, community groups and charities.

Ballyraine FC committee member and long-time partner Charlie Shields thanked Andy for his time and support. He was a very welcome addition to the fundraising sub-committee and his guidance and leadership made the job so much easier.

The current Ballyraine FC chairman Enda Nicholls thanked Andy for his support and guidance during the project. He noted that because of the many years of hard work of coaches such as Andy and Charlie the job of fund raising for the pitch development project was a lot easier than initially expected. There was a lot of good will towards the club in the community largely because of these two men.

Andy O’Boyle thanked the club for their kind gesture and said that he was delighted and very proud to see the club was going as strong as ever. He said that he still follows the development of the club in the local press and is happy that the it is in safe hands with the current committee.

Over lunch in Arena Seven, Enda offered Andy a coaching job with one of the current Ballyraine FC teams if he wanted to make a second comeback! Andy said he was flattered but would need some time to think about that one!

Thank you, Andy O’Boyle from everyone at Ballyraine FC.