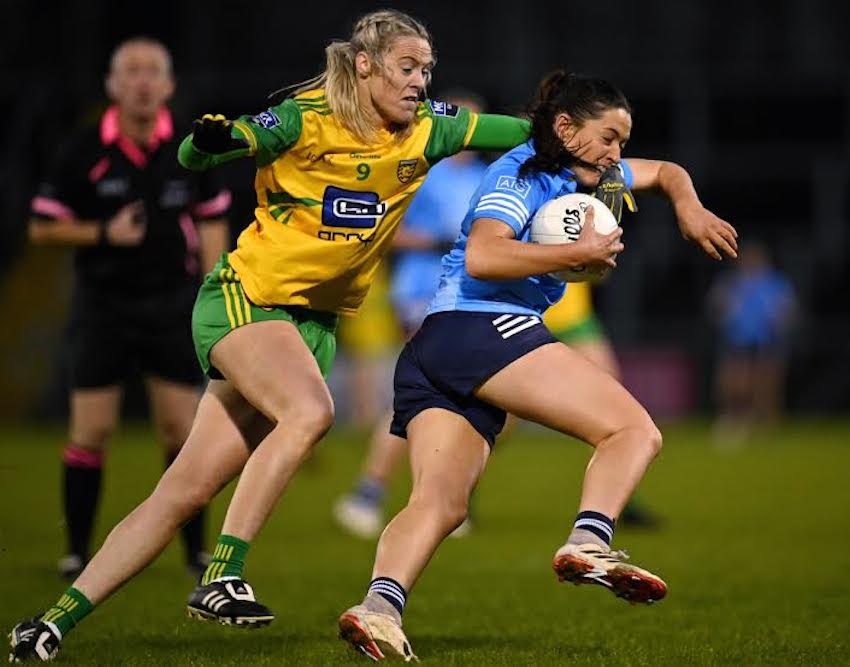 A remarkable 23 seconds in which Donegal scored two goals gave Donegal a great win over Dublin in the National Football League semi-final.

Maxi Curran’s side looked down and out at 0-8 to 1-10 behind with 3 minutes to go but Emma McCrory scored from a rebound off a Nicole McLaughlin shot that hit the crossbar.

Yvonne Bonner then made it 2-8 to 1-10 in Donegals favour as she intercepted a stray pass just after the kick out from McCrory’s goal and hit the ball into the empty net.

In a cagey opening couple minutes with both sides kicking wides, Lyndsey Davey got the opening score after 5 minutes from play but Geraldine McLaughlin immediately replied with a free.

Donegal were ruthless in the early stages with their free taking as Karen Guthrie got Donegal two points ahead with a couple of frees and McLaughlin got her second point.

Guthrie got Donegal’s first point from play as they went into the water break 0-5 to 0-1 ahead.

Hannah Tyrrell missed a couple of frees for the Dublin side but she made up for it soon after as she capitalised on a mistake from Shelley Twohig.

Twohig caught the ball near her goal and tried to play it out but Tyrrell blocked the pass and smashed the ball into the net.

Kate Sullivan levelled the game with a point from play as Dublin dominated the second quarter but Yvonne Bonner got her first point of the game just before half-time to give Donegal their first point in nearly 20 minutes.

A third McLaughlin free gave Donegal a 0-7 to 1-2 lead at half-time.

Sullivan got Dublin back to a point behind with a simple free just two minutes into the second half and they went ahead soon after.

Davey got another score from play to level the match again and Nicole Owens gave Dublin the lead after 43 minutes.

Bonner again levelled the game with a great score but at the other end moments later Jennifer Dunne replied with an impressive run and score.

Tyrrell scored a free as Dublin began to get away from Maxi Curran’s side.

However, Donegal came back from the brink of defeat with an amazing spell of two goals in less than a minute.

Bonner played in Nicole McLaughlin who hit the crossbar and Emma McCrory punched the rebound into the net.

Seconds later Dublin made a mistake and Bonner capitalised, intercepting the pass to keeper Ciara Trant, and she fired into the empty net to make it 2-8 to 1-10 with the last score of the game.

Donegal will play the winners of Meath and Mayo in the final.