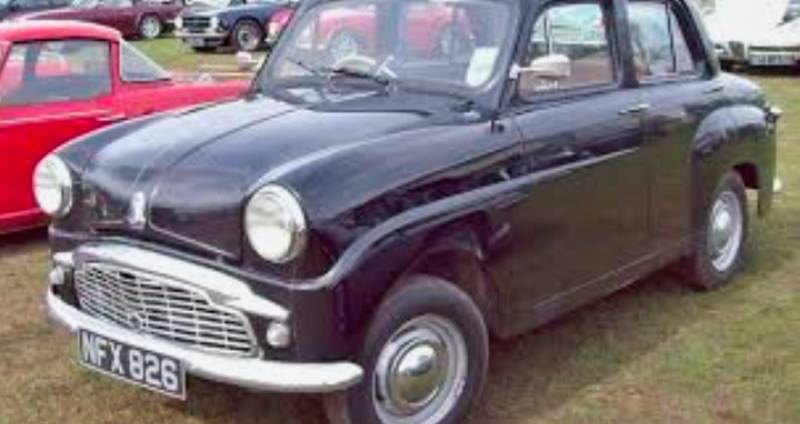 DD Motoring: Anything but a ‘Standard’ car

Our old Standard is the family car I remember the best.

I remember its face, the headlights as eyes, the grille as a slightly sad mouth.

The back of a Standard could be confused for an Austin of the same size which were a lot more common on the road, known as a Baby Austin or an A30. 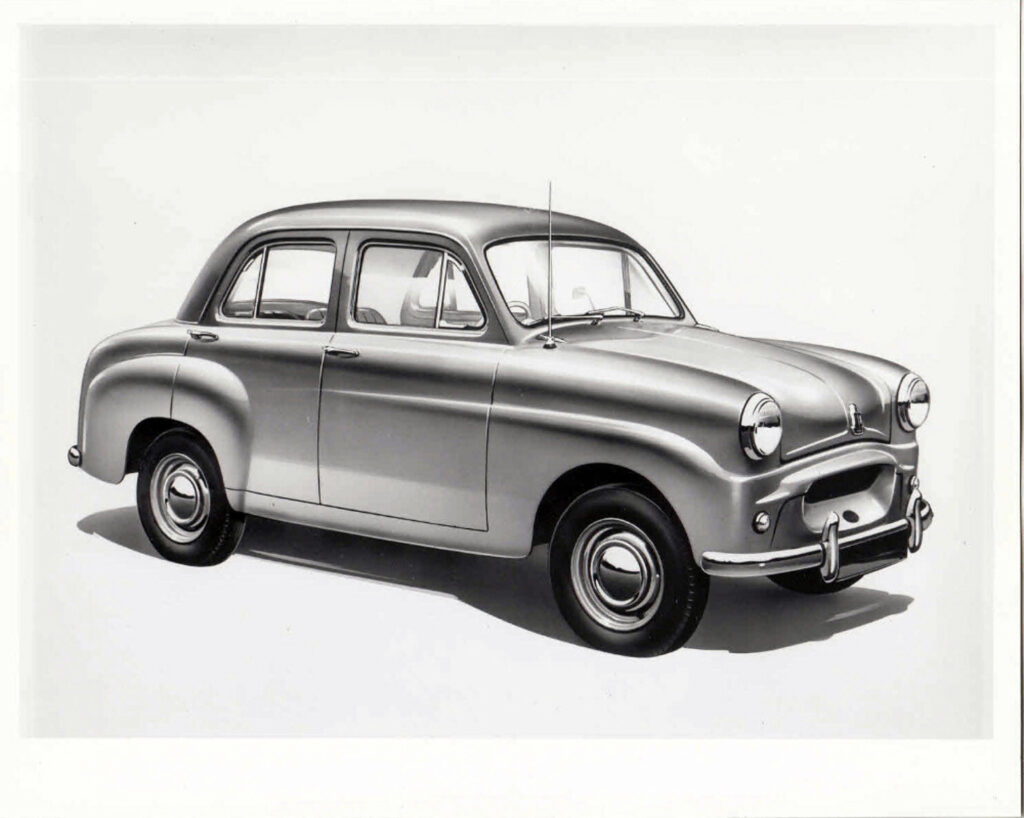 A beautiful sketch of a Standard car brings back memories of my childhood.

Years after we had changed our Standard I would often spot what I thought looked like our old family car, only to be disappointed when I made it around to the front and spot the completely different face.

Our Standard was called ‘Betsy’ – a name carried on to all our family cars growing up, including a Renault 4L and an Anglia Estate, until we considered ourselves grown up too much to think of cars as people, or to have personalities.

It was in a Sunday spin at the weekend heading in the general direction of Inishowen and spotted an old cream VW camper passing by as I was stopped at a roadside coffee stop. That unmistakable sound of the flat four engine trying to keep up with the speed of the traffic on the main N13.

Our Standard sounded nothing like a VW but it had its own sound , a whine of the gear box and a rasp of its exhaust. As the VW exited the roundabout at Bridgend and doubled back in the direction of Buncrana. 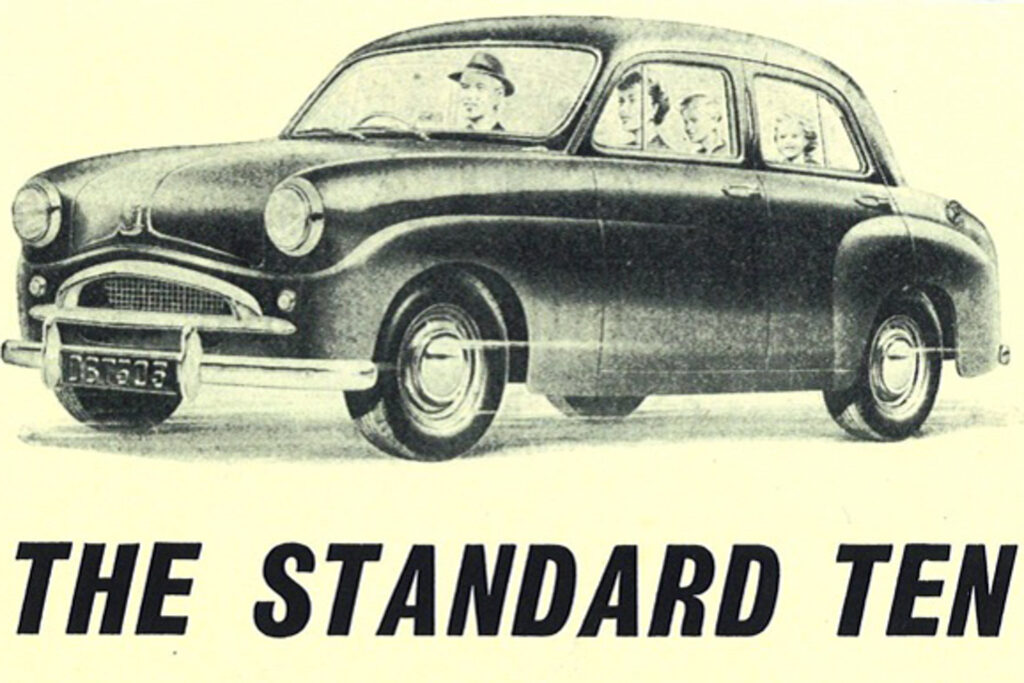 The thought crossed my mind that the camper wasn’t local and could possibly be on satnav directions when they didn’t take the ‘slab road’ from Burt to Buncrana.

Even though I was a good few cars on the road behind the camper van ,I was ahead of them on the road in my memory.

Sitting with my head nearly hitting the roof onboard Betsy, back as a four year old sitting on a car load of holiday luggage with my younger brothers Nelius and Cathal heading off on our first official holiday in the summer of 1968. Our Standard Ten, which we called Betsy was a ten-year-old car built in the 1950’s.

I remember the smell of that car, and remember the red seats my mother had. Our then youngest brother Peadar sat on her knee in the front seat. My father would be smoking a Major with his elbow out the window.

We were heading to Clonmany where we rented a house for a month in the summer as my father was stationed there, working for the ESB.

That year, we had two vehicles in the very narrow driveway of our bungalow at the end of the Main Street in Clonmany.

One was a brand new Anglia Van that my father got from the ESB, it had that new smell inside it. I remember sitting behind the steering wheel, letting on that I was driving it away on a journey on my own. 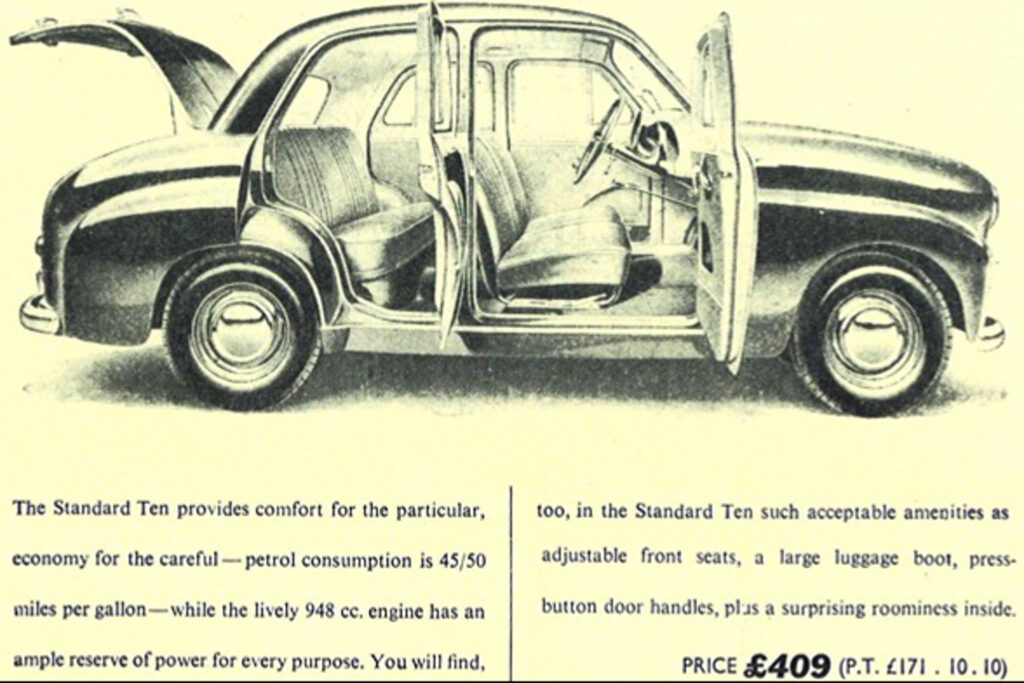 My day dream was rudely disrupted when I was caught in it in a thunder storm and the heavy shower pelting on the bare panels of the yellow ESB van frightened me and I was afraid to go back into the van on my own for a good while.

I remember going with my father in the car to the pub. I remember a wee lever somewhere between seats that my father would turn that let in a reserve gallon of petrol into the tank when the needle was resting on empty.

I watched the way he would start the Standard, first by moving the gear stick from left to right a few times then turning on the key in the middle of the dash followed by pulling out two buttons, one for the choke and one for the starter.

Daddy always kept Betsy looking really well, the bits of chrome in the mesh type grill and hubcaps shining. The only thing that I have forgotten over the years is what colour it was, grey or black.

Two cars after that a Renault and an Anglia Estate were both grey so I think that the Standard was black.

There was no radio in the Standard, we made our own music, singing songs like Old McDonald had a farm when we were travelling down the slab road. I remember a transistor radio that we took to the beach with us.

Songs that my mother would join in with like ‘The green green grass of home’ by Tom Jones Or ‘Walk Tall’ by Val Doonican which my mother would sing to us, her young sons.

“Walk tall, walk straight and look the world right in the eye,

That’s what my mama told me when I was about knee high,

She said son, be a proud man and hold your head up high,

Walk tall, walk straight and look the world right in the eye.” 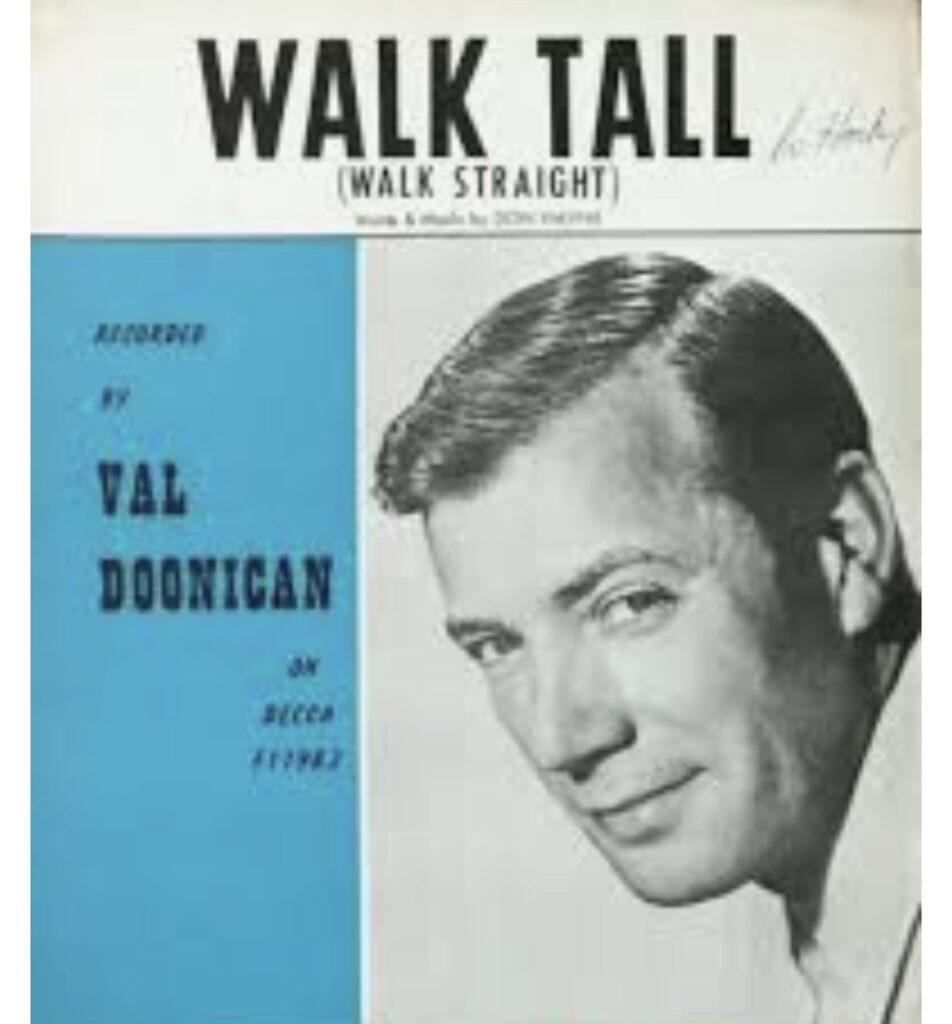 One of the sign along songs growing up Walk Tall by Val Doonican.

Then the very odd time, my parents’ all time favourite would come on the radio and it would be turned up and tuned in a bit to get a better reception, losing the station completely for a few seconds before the reception floated back.

‘Stranger and on the Shore’ was Fred and Mary Ellen’s all time favourite, an instrumental played on the clarinet by Acker Bilk. Both of them would hymn along with the sound of the clarinet.

That wee Standard car that we all called Betsy marks a very early part of my growing up that I hold on closely to.

Life in our family changed after this chapter passed, my maddy told me that my mother never got a chance to go for a spin in our new Renault 4L that we got after that, she did see it out of her hospital window and she told him the boys will love that car.

At the end of the summer of 1968 we packed up wee Betsy and headed for Letterkenny. We left our bungalow with the two bay windows and sitting high on the luggage in the back, we headed in what seemed like a massive journey singing our signature tune as Letterkenny came into sight

“Letterkenny here we we come,

Right back where we started from.

The flowers, the flowers that bloomed in the spring.”

A few years after my mother passed, my father was again stationed in Inishowen in the early 70’s.

Now Daddy would bring us down to Inishowen for 8 weeks. We stayed in a caravan in the sand dunes in Lag at the Five Finger Strand.

It was a great holiday, our old Anglia Estate lay broken down at the back of the house back in Letterkenny, it reflected our life journey at the time.

The name Betsy made its last move from family car to the ESB truck daddy was driving which we toured about Malin in that summer. We were all on board the day the lorry turned 100,000 miles on the clock as it crossed over a bridge not far from Malin head.

We had no radio with us that year so Daddy would sing songs like The Faughan Side and the Rocks of Ban and we would join in, my brother Nelius was a great tin whistle player.

Daddy would get Nelius to play a horn pipe reel on the whistle standing high on the sand dunes in Lag, looking out onto the Five Finger Strand, he was our version of Acker Bilk in those years. He was our stranger on the shore.

On Sunday evening last I ended up in a place called Aughaclay. It was a place I only ever heard the name of all those years ago.

In the graveyard of St. Patrick’s church I started to search for the gravestone of a dear family friend that gave us the warmest welcome in Malin in the 70’s.

Then, along the church wall, I spotted the smallest print in brackets on a white headstone. The word Lily, along with her fathers name Andrew, who my father always spoke highly of as it was where he stayed when he first went to Malin with the ESB in the 50’s. 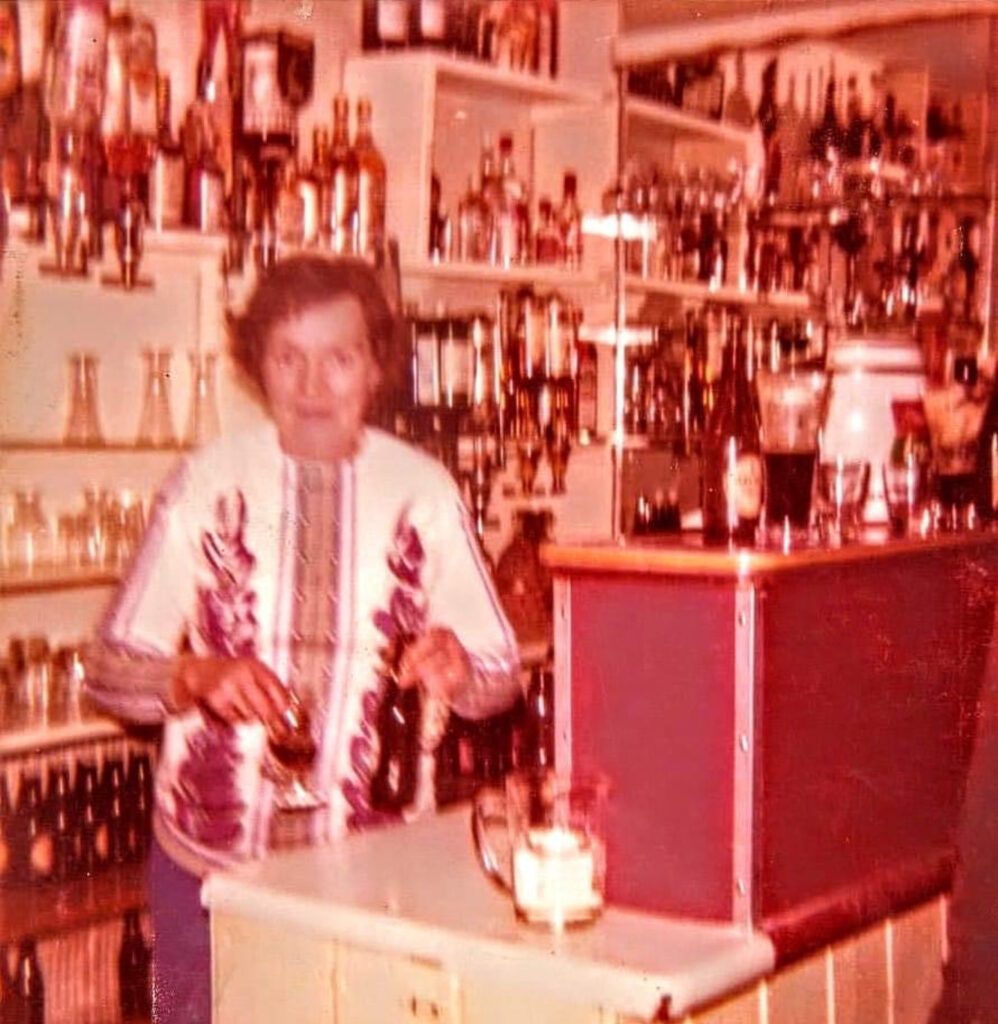 Lily working away in the family business in Malin Town.

Back in the 70s we enjoyed a good few evenings in the pub in Lily’s as we enjoyed the warm welcome at Lily’s in Malin.

It was the norm for the pubs to close on a Sunday afternoon for a few hours. It was the only time that I ever remember Lily not being there on that day. She would head out a wee spin to her parents grave in Aughaclay.

Last Sunday I found that church and its graveyard and found Lily’s grave covered in beautiful purple flowers a bit like heather. 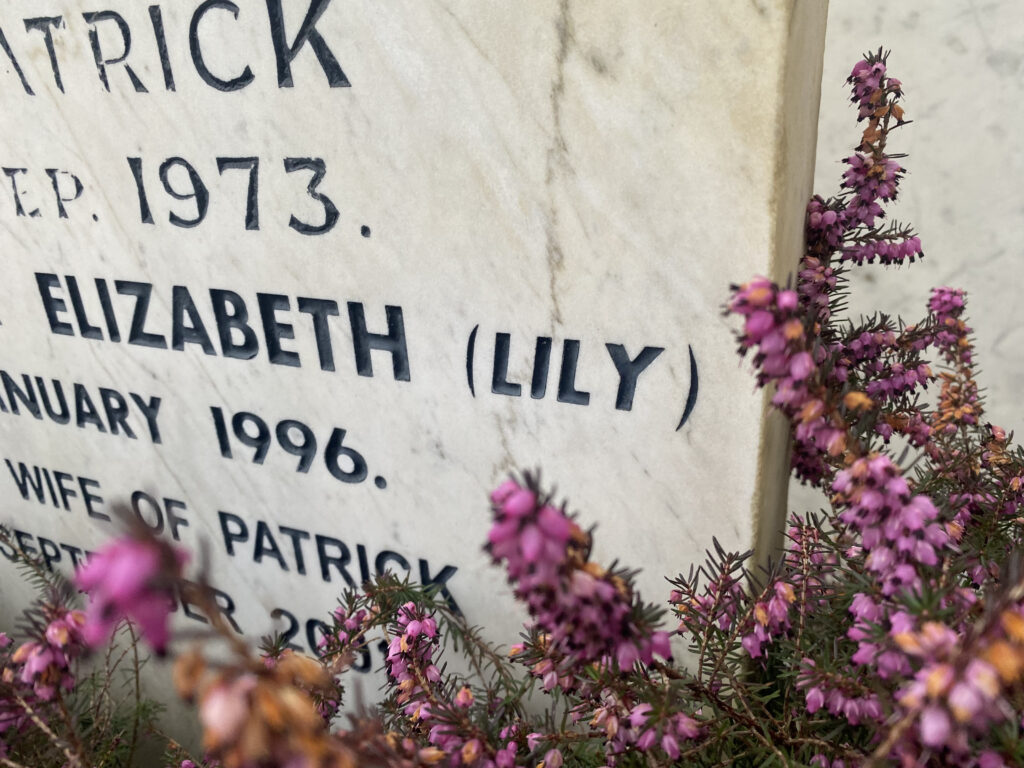 The late Lily McMonagle, a great family friend in times of great need.

What I never realised was how young Lily was when her mother, Elizabeth passed away on Christmas Day in 1936. Lily had a very positive and strong personality and yet she was the kindest person, We never knew she was like us losing her mother long before her time.

May all the mothers that passed before us at a very young age rest in peace, they are always in our memory.

DD Motoring: Anything but a ‘Standard’ car was last modified: March 23rd, 2022 by Brian McDaid
Facebook0Tweet0LinkedIn0Print0