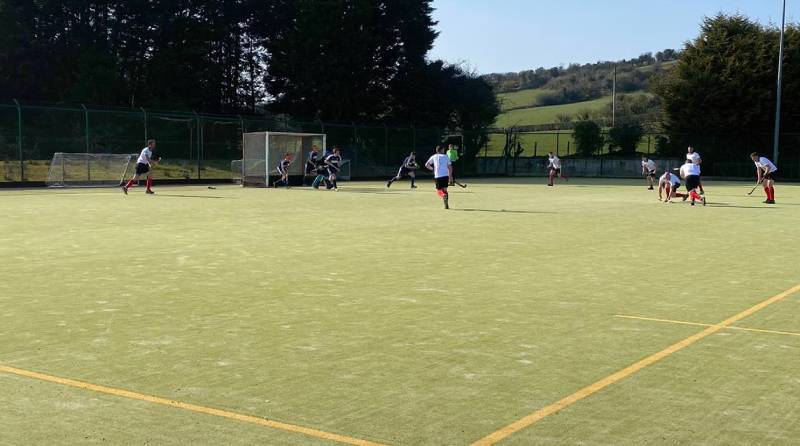 The heat combined with what was at stake saw a few players get hot headed as both teams fought for their lives.

North Down came in to the game knowing if they didn’t win, they would be relegated, while Raphoe now need to defeat Mossley next weekend and hope other results go their way in order to maintain their Premier Division status.

From the off, Raphoe were on the back foot as North Down controlled the opening quarter.

David Moore did well to stop Raphoe going a goal down in the first minute, and the resultant penalty corner was defended well as Raphoe were given an early scare.

Seven minutes into the game however, they conceded a field goal.

It was 2-0 shortly after the beginning of the second quarter from a penalty corner.

There was a danger of Raphoe heads dropping when North Down made it 3-0, but James Wilson quickly responded as Raphoe looked to fight back.

It was short lived though, as just before half-time, North Down hit the post but the rebound was converted to make it 4-1.

To rub salt in the wounds, after an exchange on the half-time whistle, three Raphoe players were carded and they would start the second half with 8 men.

That didn’t hinder them for long as they defended well until getting back up to full strength, and they began to dominate proceedings.

A couple of penalty corners were saved brilliantly and the North Down keeper saved his team on a couple of occasions before finally Raphoe got one back.

A penalty flick from Alan Meehan gave them hope at 4-2 with the fourth quarter still to be played.

Despite an onslaught of pressure from Raphoe in the opening stages of the final quarter, North Down got up the pitch and carefully kept possession, forcing penalty corners.

The match ended 4-2 and Raphoe will travel to Mossley next weekend knowing a win may not even be enough.