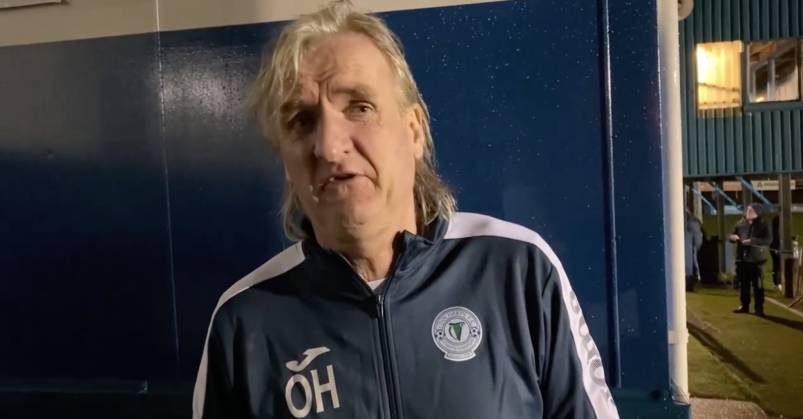 Watch: Horgan: ‘We didn’t do enough to get anything from the game’

Ollie Horgan was left disappointed with his sides 3-0 loss to Shamrock Rovers, but believed his side didn’t do enough to merit a result.

Shamrock Rovers opened the scoring in added time in the first half through a corner which Andy Lyons headed into the net.

Harps had chances and through an Ethan Boyle header hitting the crossbar while Eric McWoods went close at 1-0, as well as Élie-Gaël N’Zeyi hitting the post in the first half at 0-0 but they couldn’t find the breakthrough.

A talking point came when Roberto Lopes fouled McWoods in what could have been a red card but referee Rob Harvey gave the Rovers defender a yellow card, and it was 2-0 minutes later.

Again Lyons scored, this time after a great move.

It was 3-0 and Mark Anthony McGinley was sent off four a foul on Rory Gaffney and Graham Burke made it 3-0 from the penalty spot.

Horgan won’t be thinking about the result for too long as they face Drogheda United on Monday night at Finn Park.

Watch the full interview with Ollie Horgan below:

Watch: Horgan: ‘We didn’t do enough to get anything from the game’ was last modified: April 1st, 2022 by Dáire Bonnar
Facebook0Tweet0LinkedIn0Print0