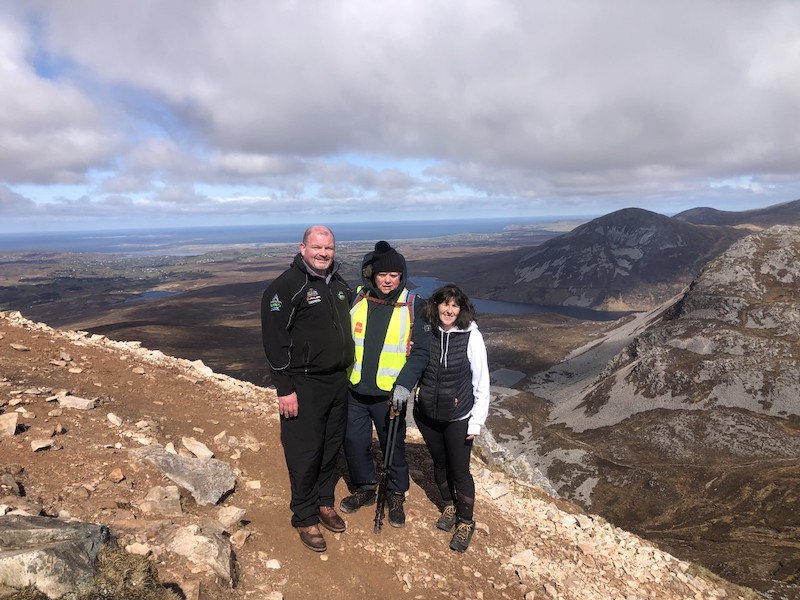 Over 600 take part in ‘Climb Errigal Together’ event

Saturday’s ‘Climb Errigal Together’ charity event has been hailed  a huge success, with around 600 taking part in the local fundraiser.

They came from all corners from early morning and the last of the climbers were congratulated for their efforts at Pobal Dhún Lúiche, which acted as basecamp, by Taoiseach, Micheál Martin, just before 5 pm.

Pointing out that he was delighted to be able to stop off at such a scenic location, Mr Martin said he was disappointed that he didn’t get the opportunity to climb Errigal.

“What this event illustrates to me is that we have a strong sense of community in our country still and we are still rooted in the community. That is reflected right across the country today – there are different families and communities planning events to help Irish Motor Neurone Disease and Pieta.”

The Taoiseach thanked Stephen ‘Ann’ O’Donnell from Crolly and his family for their input in the charity climb. Stephen was diagnosed with Motor Neurone Disease last year and is one of 22 people in Donegal currently living with the condition.

“You were on the minds of many, many people today as they climbed. I’m delighted to have got the opportunity to meet you and I’d like to thank you for all you’ve done for the community,” he said. 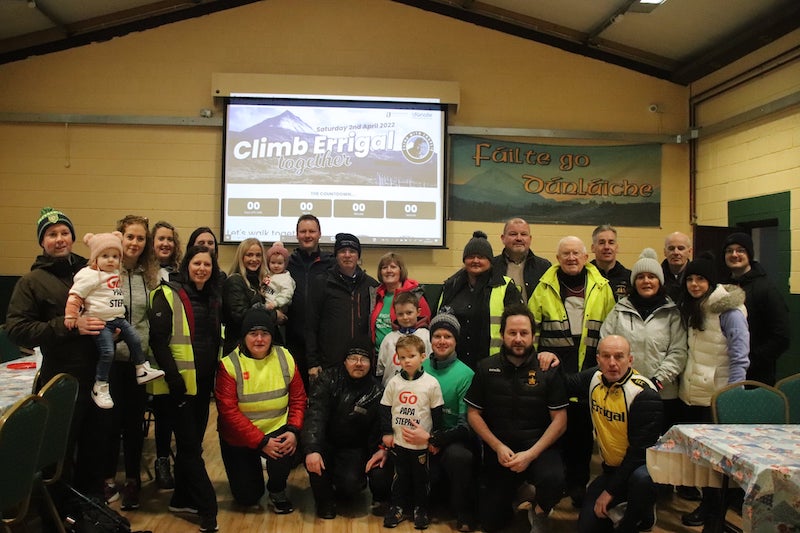 The O’Donnell family from Crolly, with friends, supporters, and event organisers before they started their climb of Errigal Together on Saturday afternoon in Pobal Dhún Lúiche.

The charity challenge was one of over 200 climbs organised nationwide in solidarity with Charlie Bird.

“Climb Errigal Together” was launched by Donegal County Councillor, Ciaran Brogan, in February, and the efforts of many over the last six weeks culminated in a superbly organised event in the heart of the Donegal gaeltacht.

Giving his reaction to the challenge, Cllr Brogan said he was overwhelmed by the generosity of people.

“From an organisational point of view, we couldn’t be happier,” he commented.

“From the night of the launch, there was a huge buy-in from the local community in Dunlewey and from the people of Donegal and the North West. The fact that so many people offered their help and support made pulling an event of this size together so much easier. Pobal Dhún Lúiche was the perfect location for basecamp and the shuttle bus service ran like clockwork. Our main priority was to make sure that everyone who came along and registered to climb got up and down the mountain safely, and thankfully we managed that,” he added.

“I’d like to thank everyone who played a part in making “Climb Errigal Together” such a success. It was a great example of people and communities coming together for two worthy causes. We all know the great work Pieta does, while I think many of us have learned more about Motor Neurone Disease over the last number of months than we’ve ever learned.”

Noting that “Climb Errigal Together” was a team effort, Cllr Brogan paid particular tribute to the event coordinator, Eamon McGee.

“There’s one person without whom this event would not have been possible and that’s Eamon McGee. I’d also like to thank the community of Dunlewey. They were unbelievable today,” he added.

“We are extremely grateful to the local bus operators, Feda O’Donnell, John O’Donnell from Ranafast, Boyle’s Buses Creeslough, McGuinness Coach Hire in Glenties, and McGettigan Buses in Letterkenny who all provided their services free of charge.”

As of Sunday morning, the “Climb With Charlie” campaign had raised €1.72 million.

Donations to the “Climb Errigal Together” challenge can be made by clicking the link below: