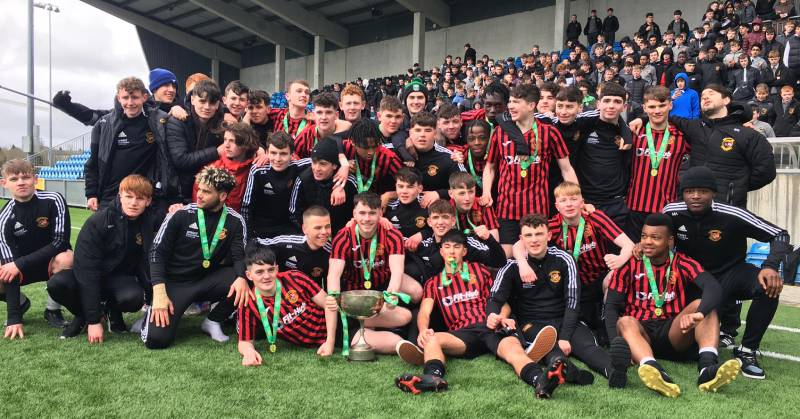 St. Eunan’s College manager Michael Kelly has hailed his eleven ‘heroes’ that have brought the FAIS Dr. Tony O’Neill National Senior Cup back to Letterkenny for an outright seventh time.

Kelly’s side took the lead after a quick counter attack found Noah Barrett who finished well but De La Salle turned it around with goals either side of half-time in Athlone.

Nathan Plumb levelled with another quick counter, and with the game looking like going to extra time, Plumb was fouled in the box and Tiernan Brown stepped up to slot away the penalty in added time to win the game.

Kelly said: “We’re absolutely elated but it’s no more than they deserved so it’s good to see them fulfil their potential and get what they deserved.

“I think the boys heads went down at 2-1, when you’re 1-0 up and then it goes 1-1 seven or eight minutes before half-time and then they scored again three or four minutes after half-time, they’re sucker punches, so it took the boys a bit of time to adapt.

“We changed our system and that worked out better for us and I think every time we turned them, we had joy and it encouraged the boys to keep playing them balls in the channels and I think both goals from open play came from that and the penalty probably came from that.

Kelly was clearly proud as heard in his voice talking about the team, and he praised every single player that took the field in the 3-2 victory.

He added: “People were asking about a man of the match but there were 11 men of the match, Nathan Plumb, David Boakye, Noah Barrett had a great game, Dylan McAteer had a brilliant game, Ryan Creevy and Jay (Maguire) were immense in the middle of the pitch, they were heroes the whole lot of them.”

While St. Eunan’s got to the final of the last edition of the Tony O’Neill Cup, they never got to play that final against Douglas Community School of Cork due to beginning of the pandemic.

It would have been a bit of a disappointment not to get the chance to prove they were the best school team in the country then and this was something Kelly wanted to have the boys prove today.

Kelly added: “I didn’t say it in the dressing room but I meant to say it, that we’re playing for them (boys who have since moved on) as well and the whole school.

“They got amazing backing, there’s a fantastic buzz in the school and the boys are heroes to the Juniors in the school, no more than the likes of Sammy Bogan was a hero to me when I was a Junior in the college.

“That buoyed them and they represented everyone with aplomb, and there was 38 players in that squad so they played for all the boys that didn’t get onto that pitch.”

Kelly also appreciated the support of the fans which he believes helped the team on to victory.

“The noise just spurred us on, it made an occasion out of it. I’ve brought teams down for Junior All-Ireland finals and we haven’t had many fans there and it is very different.

“It brings a sense of occasion when there’s fans there and young fellas both playing and watching will never forget being in Athlone on the 6th of April 2022 when St. Eunan’s College won their seventh Senior All-Ireland football title.”