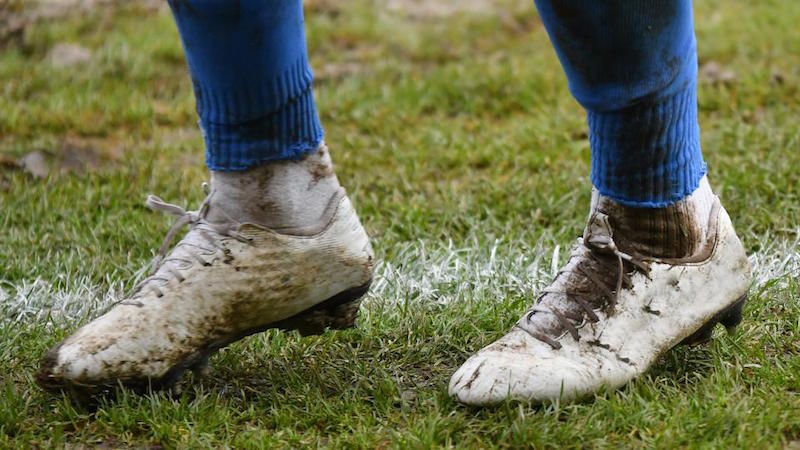 In glorious sunshine before a large crowd, Redcastle United came from behind to deservedly claim their first O Gara Cup in thirty years over a Culdaff side who will be disappointed with their performance.

Culdaff began well and a speculative chip from Jack McLaughlin in the second minute sailed over the bar. They then took the lead on 6 minutes after a superb ball from Ryan Greene released Bryan McCandless on the right who advanced into the area and pulled the ball back where Jack O’Brien’s effort took a deflection forcing Michael McCole to parry but McLaughlin was on hand to fire home the loose ball.

In truth that was as good as it got for the Caratra side as Redcastle were on top for most of the remainder of the game. Redcastle responded through Stephen Grant who latched onto a Shaun Curran ball over the top and hooked an effort goal wards but Martin Mclaughlin gathered at the near post.

Grant then broke on the right and superbly picked out Brendan Murphy sixteen yards out but again Mclaughlin saved. On 15 minutes a brilliant cross field pass from Jack Ferry  found Ronan Hoy who evaded a challenge and poked the ball past McLaughlin but was unlucky to see it crash off the base of the post.

Redcastle continued to make the running and on 20 minutes hesitancy in the Culdaff defence saw the ball fall for Gavin Grant who from point blank range headed weakly at McLaughlin. In a rare foray forward Culdaff replied with a superb pass from Jack O’Brien finding McLaughlin whose early shot was parried and gathered at the second attempt by McCole before Greene headed over following a corner minutes later.

Again Redcastle upped the tempo with a Curran free tipped over by McLaughlin before  Murphy received a Gavin Grant cut back only to fire over from the edge of the area. On the stroke of half time a mix up in the home defence saw the ball fall for Ferry who squeezed his shot past the advancing McLaughlin but Eugene McLaughlin got back to clear the ball off the line.

Redcastle dominated the second half and when Joe McCauley failed to control a free kick over the top, the chance was lost on 49 minutes. Before the hour Hoys cross from the right deflected off a defender and McLaughlin reacted superbly to claw the ball away before the defence cleared.

Redcastles equaliser had a touch of good fortune but few would argue that they didn’t deserve it. Stephen Grant reacted quickest to a ball that came off the corner flag and his looping cross was touched onto the bar by McLaughlin before a defender headed out only for Murphy to control and float a sublime chip across McLaughlin to the top right hand corner for a brilliant finish.

Four minutes later they struck for the winner when Hoy controlled a free kick superbly before drilling low to the corner from fifteen yards for another excellent finish. Culdaff finally tried to respond and McCole comfortably gathered a Greene header from a corner.

Minutes later good work by McCandless on the left saw him pick out substitute Dillon Ruddy whose goal bound volley was blocked by a defender on 83 minutes. Culdaff pushed to the end of the game but found the Redcastle defence standing solid and  on the break Hoy had one snapshot well saved by McLaughlin before seeing another from distance sail over the bar.

MAN OF THE MATCH

For Culdaff. Ryan Greene played a captains part and Bryan McCandless was a threat in attack while for Redcastle, Jack Ferry and Stephen Grant were prominent. But the award goes to Ronan Hoy who was a constant threat all day and scored the winning goal with a superb finish.

Needing a win to clinch third place in the league the home side started well with James Adair heading a John Timlin cross wide before Adair picked out Eoin Murphy who fired over from twenty five yards. On 18 minutes they went close again after Kieran McDaid found Bart Wesolowski who controlled but then saw his effort come back off the post.

Glengad responded and after a defensive error, Stephen Mclaughlin saw his effort saved at the expense of a corner by Eoin O’Doherty. At the other end Wesolowski headed wide from McDaids corner before the home side took the lead on 27 minutes.

Great work on the left by McDaid saw him find Aaron McDaid to fire low past Daniel Mullarkey from twelve yards. The visitors then equalised on 36 minutes after Terence Doherty released Brandon Browne whose initial shot was well parried by O’Doherty but Glengad recycled possession and when McLaughlin crossed Browne headed home from five yards.

Buncrana had the first chance of the second half when James Adair released Wesolowski who was unlucky to see his effort crash off the post. Glengad replied and took the lead on 63 minutes when Terence Doherty beat the offside trap to race clear and drill low past O Doherty.

But the home side levelled within minutes after an Aaron McDaid cross was controlled by Gerard Boyle who swivelled and shot low past Daniel Mullarkey from eight yards. Buncrana finished strongly with Aaron McDaid robbing a defender but his effort was turned around the post by Mullarkey.

The home side struck for the winner with three minutes left when a Ryan Doherty cross was headed back across goal by Boyle for Jerry Gill to head past replacement keeper Patrick Mclaughlin and seal the points.

In excellent conditions on Sunday morning at Gortnamullin there was a brisk opening to the game with paly flowing from end to end. Cockhill got off to a dream start when they opened the scoring in the 8th minute after Jay Bradley pounced on a loose ball to drill past Mark McLaughlin from close range.

Rovers responded and got back on terms midway through the half when Daniel Gallaghers cross from the right was slotted home from close range by Andrew Gallagher. The remainder of the half saw neither side create a clear chance with defences on top.

After a close beginning to the second half the visitors took the lead in the 57th minute when Luke Bradley fired low past McLaughlin from fifteen yards after good approach play. They increased their advantage on 74 minutes when Conor Graham fired a twenty yards free around the wall to the bottom corner.

Jay Bradley was then on target with another free kick late in the game but McLaughlin made a fine save to leave the final score three one to Cockhill.

Buncrana moved to within toughing distance of the league title with this hard fought narrow victory over a resurgent Carn side. Carn had an early chance after Conan Gibbons broke and crossed for Conor Mclaughlin who failed to hit the target from fifteen yards.

Buncrana regained the lead again midway through the half when a Stephen McHugh free kick from 20 yards curled over the wall and into  the top right corner of the net . They went close again after a Jack Soal cross found Christopher McKinley but he fired just wide from fifteen yards.

The homeside responded before the interval when Conor Mclaughlin advanced on the right and crossed for Ciaran O’Kane but he fired just wide from inside the area. Carn spurned a gilt edged chance to level on 58 minutes after Daire Tully was upended in the area but this time Dzerins effort was well saved by Oran Mcbride in the Hearts goal.

. Buncrana doubled their lead in the 83rd minute when substitute Eoin McNamee broke on the left wing rounded the defender and crossed it for Stephen McHugh who was unmarked in the 18 yard box  to unleash a powerful shot past Daniel McDaid to the bottom right corner of the net to complete his hat trick. Carn pulled one back in injury time after a Tiernan Doherty corner on the left found Ciaran O’Kane who headed it to the bottom right corner of the net from 10 yards.

In beautiful conditions at Tremone on Sunday morning the visitors started well and from a home attack they broke quickly in the 7th minute with Cormac Dillon crossing to David McLaughlin who fired just wide. On 20 minutes Conor McDaid and John Grant played a one two before releasing Ronan Shovlin whose cross found McDaid but he blazed over from six yards.

Carrowmena responded with a long range Michael Henry effort tipped over by Roger McGilloway in the Rasheney goal. Within  a minute the visitors broke the deadlock when Shane Gordons through ball released Dillon to run clear, round the advancing Kyle Dougal and slot home.

Carrowmena came much more into the game then with Ruairi Dougal heading just over from Henrys corner. Then on the stroke of half time Puaric Gillen found Ryan McDermott wide on the right and his cross saw Sean Diver somehow fail to convert from point blank range.

Carrowmena started the second half well and got back on terms in the 59th minute when Gerard McLaughlin released McDermott whose first time effort crashed off the bar for Ronan Doherty to fire to the roof of the net. Five minutes later McDermott was the provider when he pulled the ball back for Shane Skelly to fire left footed to the roof of the net from fifteen yards and put the home side ahead.

They made it three one on 71 minutes after Skelly released Gillen who in turn fed Ronan Doherty who fired home from a tight angle. Rasheney rallied and reduced the deficit in the 80th minute after Charlie Doherty laid the ball off for David McLaughlin to fire home from twelve yards. Rasheney pressed very hard in the closing stages but the home defence stood firm.

The visitors started well and took the lead on 9 minutes when a Sean McGrenaghan s free kick deceived Mark Grimley in the home goal. But the home side equalised midway through the half after Declan Lynch advanced on the left and crossed for Daniel McFadden to slot home from eight yards.

It was Moville who got off to a great start in the second period when they took the lead on 53 minutes when Ronan McCarrons through ball ended with Conor Lafferty chipping the advancing Dermot Callaghan. But Culdaff rallied and levelled the match again minutes later when Grimley parried a Peter Doherty free kick  but Oisin McLaughlin pounced to drill home the rebound.

The home side were the awarded an indirect free kick inside the area and when the ball was rolled to Lafferty he fired to the net from eight yards. They sealed the win when  Lynch again broke on the left in the 75th minute and crossed for Mcfadden to slot home.

Inishowen Engineering Division Two  A  11am