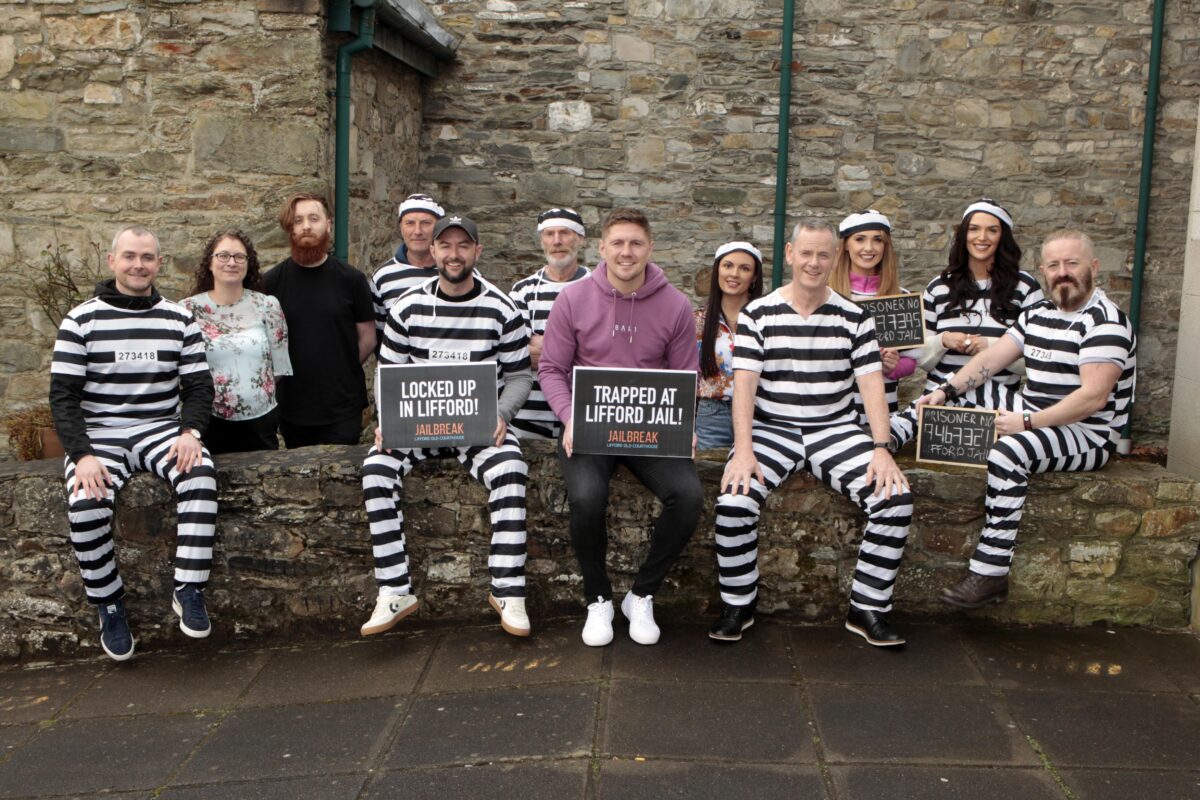 The Lifford Old Courthouse is about to host its first prisoners in 100 years tonight in a unique charity challenge.

Thirteen well-known Donegal faces are braving a night behind bars in a bid to ‘make bail’ that will be donated to local charities across the county.

The ‘inmates’ will leave their families for one night and stay in one of the old (and cold!) historic jail cells. They’ll be pleading for support during the night in the hope of seeing the light of day tomorrow.

Gillian Graham is the manager of Lifford Old Courthouse and she says Jailbreak is a great way for local businesses, charities and organisations to raise funds for their groups, schools or clubs: “Located in the heart of Lifford, Lifford Old Courthouse has been used widely by the community and local groups over the years, with all income reinvested back in to improve our facilities and create additional employment. We have also collaborated with local groups to provide services to the wider community such as Meals on Wheels. Our Jailbreak games have proven really popular with school groups, hens and stags, and other groups and we wanted to take it another step further with an overnight Jailbreak event that could be used as a novel way for charities and local organisations to fundraise. The upcoming event with the brave thirteen will hopefully spread the word about what we’re doing and how other groups and organisations can book.”

Gillian has been involved with social enterprises for over 25 years. “There are lots of great social enterprises throughout Donegal and we’re delighted to be able to raise awareness of what they do. It’s great to have representatives from other social enterprises like Johnny Loughrey from the No Barriers Foundation and Patsy McGonagle from Finn Valley AC.

“Alongside raising funds for charity, we really hope this event will also raise awareness of just how important social enterprises are for the local community and what a wide variety of work we do.

“The event has been made possible under the ARISE Programme, an awareness raising campaign for social enterprises throughout Ireland. A social enterprise is business that works primarily to improve the lives of people, reinvesting any profits into their core mission. Lifford Old Courthouse is one of the many social enterprises in Donegal and we are delighted to be able to show what is possible from community run groups.”

Looking forward to the event Patrick McHugh, Events Manager at Lifford Old Courthouse said: “We are really excited about the first ever Jailbreak event on the 29 April and we cannot thank the participants enough for giving their time and support. The group will take part in various games to earn treats and rewards for the night and we’d like to thank local sponsors for their ongoing support. The group is raising money for some brilliant organisations and charities and I hope people can get behind them with their efforts. We’ll be releasing a series of videos online via our social media platforms, so be sure to check them out to find out more. You can donate online at www.idonate.ie/jailbreak2022.”