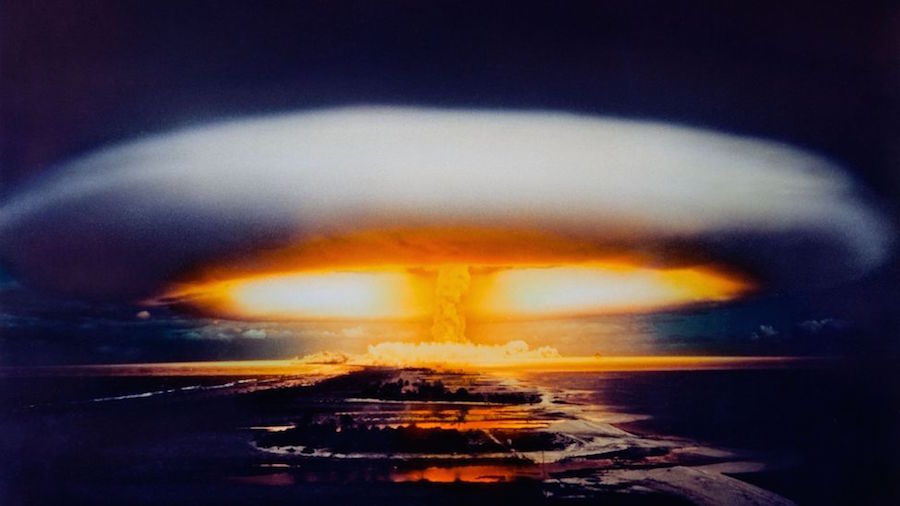 A Russian TV report which shows the impact of a possible nuclear attack off the coast of Donegal has caused uproar.

The report shows a device being detonated 300 kms off the coast of Donegal devastating Britain and Ireland.

The Russian embassy in Ireland has said the reports were a matter for the editors concerned.

The embassy said there were “no winners” in a nuclear war and said it “must never be unleashed”.

It says this attack using an underwater nuclear weapon would “plunge Britain into the depths of the sea”.

The torpedo, fired from a nuclear submarine, would explode in the sea.

The presenter said the warhead has an explosive capacity of up to 100 megatonnes.

“The explosion of this thermonuclear torpedo by Britain’s coastline will create a gigantic tsunami wave up to 500m high,” the report says.

“Such a barrage also carries extreme doses of radiation,” it adds. “Having passed over the British Isles it will turn whatever might be left of them into a radioactive desert, unfit for anything for a long time.”

Responding to the reports, a statement from the Russia embassy in Dublin said: “The views and presentations in the TV show are that of the editors.

“The official position of Russia has always been that there can be no winners in a nuclear war and that it must never be unleashed, as once again was reaffirmed in the Joint Statement of the Leaders of the Five Nuclear-Weapons States on Preventing Nuclear War and Avoiding Arms Races, published on January 3, 2022.”

In recent weeks, Russian president Vladimir Putin has spoken of his willingness to threaten to use nuclear weapons.

He described last week’s test of the Sarmat hypersonic intercontinental ballistic missile as giving the west “food for thought”.

Reacting on Twitter to the TV reports, Fine Gael TD Neale Richmond said: “Casually discussing detonating a nuclear device off the coast of Donegal, a chilling insight into the Russian state mindset, yet we still allow Russia’s ambassador to spread their state disinformation here from the embassy on Orwell Road.”

Fianna Fáil MEP Billy Kelleher TD said: “I presume someone in Irish government is conveying our absolute disgust at these threats to Ireland. There is no free speech in Russia so these statements are being made with Putin’s approval. Time to tell Russian government that this wild language is simply unacceptable to us.”

Amnesty International has previously said that Russian authorities have “unleashed an unprecedented, nationwide crackdown on independent journalism” as well as anti-war protests and dissenting voices following its invasion of Ukraine.

The human rights organisation said: “For two decades, the Russian authorities have waged a covert war against dissenting voices by arresting journalists, cracking down on independent newsrooms and forcing media owners to impose self-censorship.

“Yet, after Russian tanks entered Ukraine, the authorities switched to a scorched-earth strategy that has turned Russia’s media landscape into a wasteland.”

Russian TV issue report of nuclear attack off coast of Donegal was last modified: May 3rd, 2022 by Staff Writer
Facebook0Tweet0LinkedIn0Print0