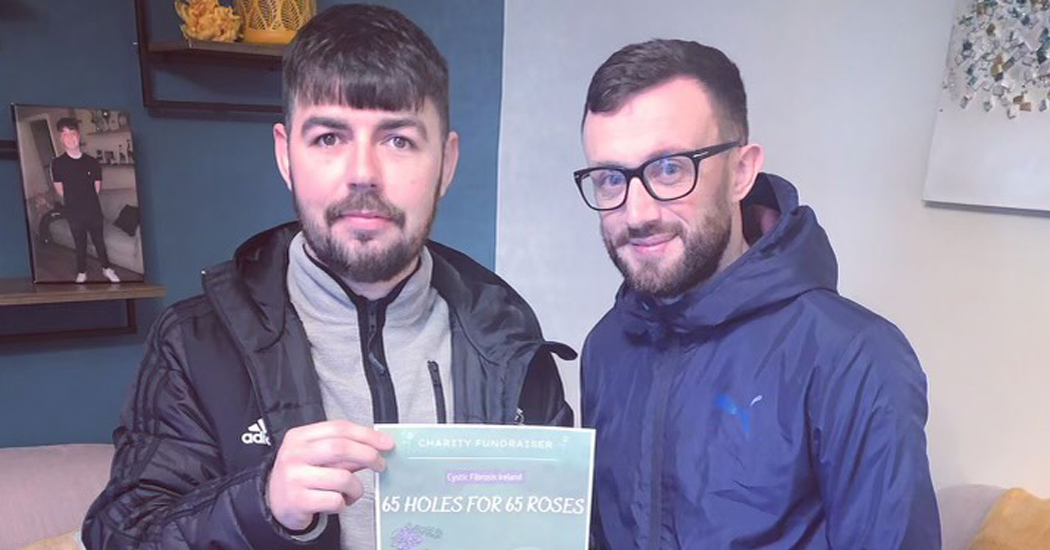 Letterkenny man Vinny McLaughlin is in for a very early start this Friday as he tees off on a major fundraiser for Cystic Fibrosis Ireland.

Vinny is taking on a ’65 holes for 65 roses’ golfing challenge all day at Letterkenny Golf Club. His marathon session begins at 6am. It’s expected to take around 13 hours, but it’s all in aid of an important cause.

Vinny, a local delivery driver and Lagan Harps Senior Manager, is raising money for Cystic Fibrosis Ireland to give thanks for the support they gave his cousin and best friend, Marc McCarron. Marc was born with Cystic Fibrosis and suffered from the debilitating effects of the disease throughout his life.

Now aged 33, Marc has a new lease of life thanks to a wonder drug therapy. The approval of Kaftrio in Ireland last year gave him the chance to rebuild his health and get back to working and exercising. Marc, also a keen golfer, will be joining Vinny for the last holes of his challenge. 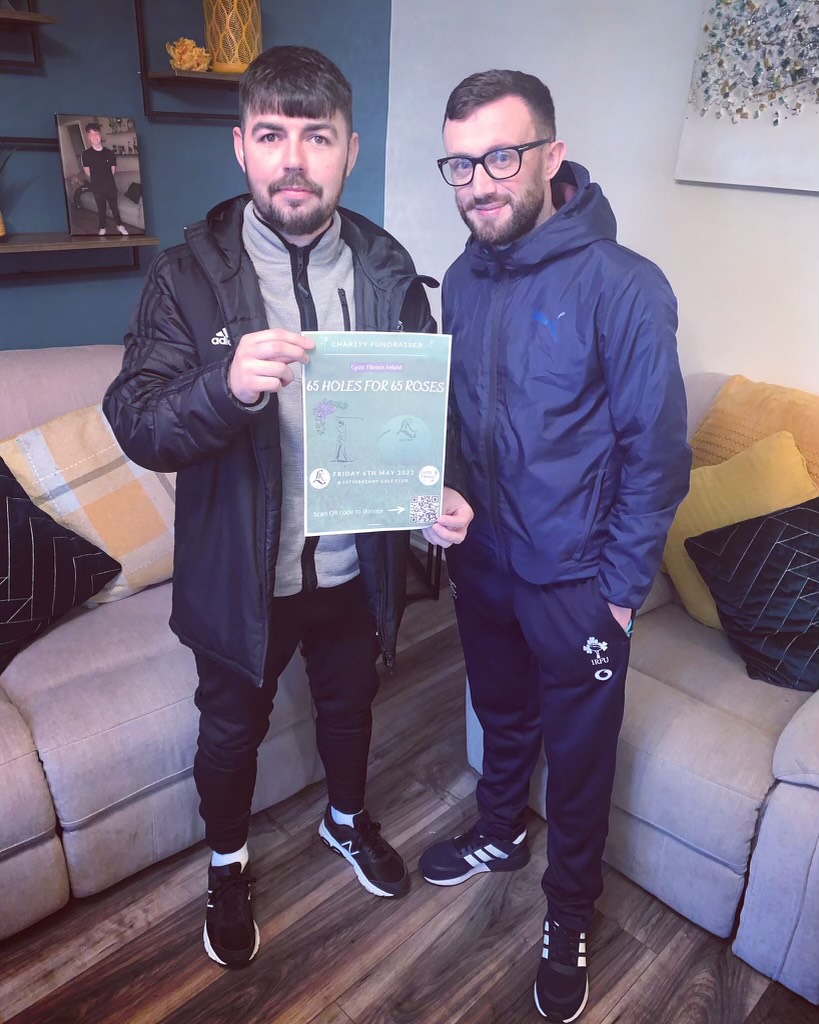 All funds from ‘65 holes for 65 roses’ will be donated to Cystic Fibrosis Ireland to help others with the disease and to support further research.  The 65 Roses name is the common term often used by young children with cystic fibrosis who can’t yet pronounce the name of their disease.

Marc said the charity has always been a great support to him: “They have been fantastic over the years. We get exercise grants, throughout Covid they would send out PPE gear like masks, gloves, hand sanitiser, and anytime I’m in hospital they are there to help.”

The fundraiser is as much about awareness as it is about donations. Vinny said: “Funds in a fundraiser is massive, but my goal was to raise awareness and to share Marc’s story. Cystic fibrosis is a horrible illness that affects so many people.”

Vinny’s campaign has received immense support from local businesses around the county who have sponsored tees. Letterkenny Golf Club have also been very accommodating. Divers Hyundai Letterkenny kindly gave Vinny the loan of an All New Hyundai Kona Hybrid to promote the fundraiser, and pledged to donate €50 per car for all cars sold during the month of April. They, alongside many more businesses, have made the challenge worthwhile. 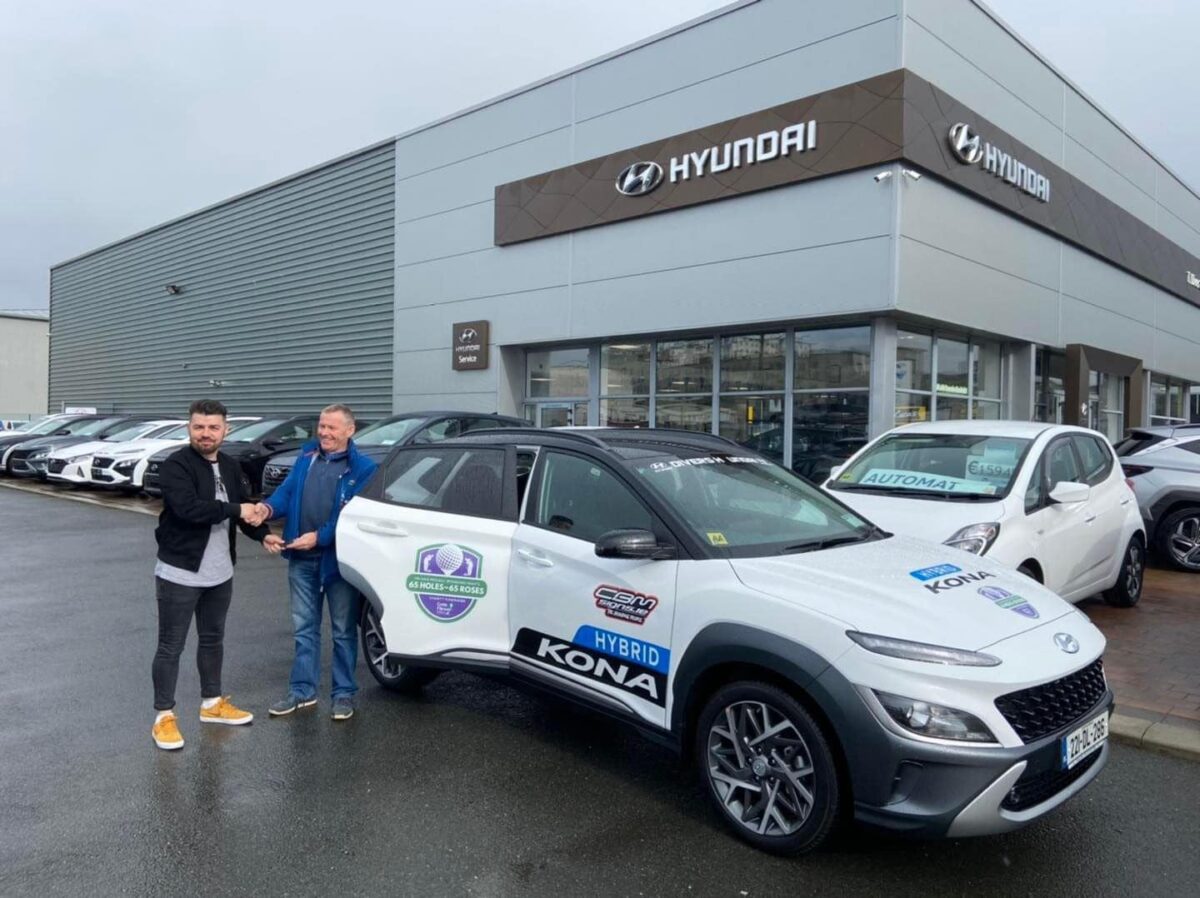 “I’d like to thank everyone who has got involved. The generosity of local businesses has been amazing. I see now why the shop local message is so important because you see how much they give back,” Vinny said.

Vinny has a great team of golfers on board to keep his spirits up during the challenge. Friends will be joining during the rounds and he’ll be keeping supporters updated through Facebook and Instagram. People are welcome to come to Barnhill and cheer Vinny on when the going gets tough.

“I’m looking forward to the day and to the end of the day more than anything!” he said. “I don’t think I could do it myself so I’m delighted to have people coming and going to help.”

There’s still time to donate to 65 Holes for 65 Roses on justgiving.com: https://www.justgiving.com/fundraising/65holesfor65roses

Donations can also be made directly to Vinny and you can get in touch at vinnymovement@gmail.com.  Follow Vinny’s challenge on Facebook here: Vinny Mc Laughlin