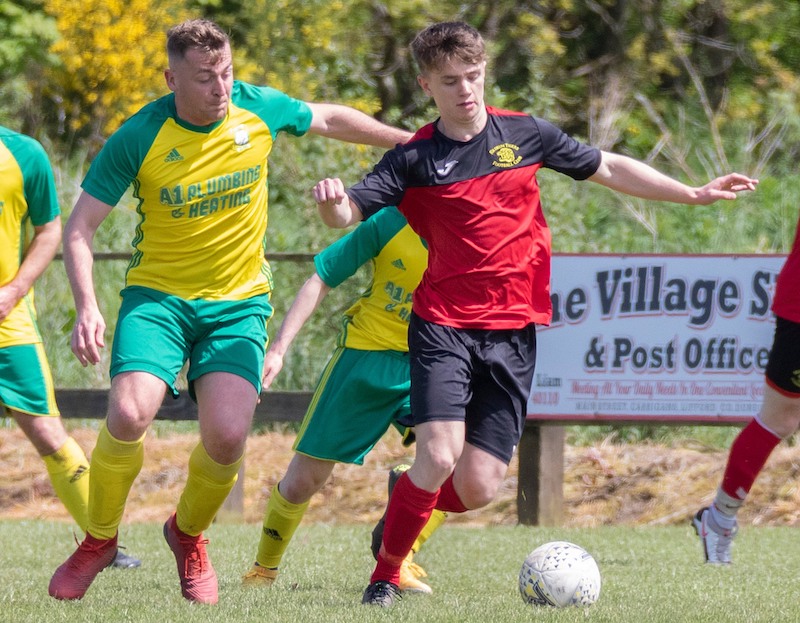 It was another busy weekend for local soccer in the Donegal Junior League 50th Anniversary Season.

Despite the fine conditions this game had a real feel of an end of season game.

It was the away side that started well and took the lead on 5 minutes when Dean O’ Donnell was played in, and he fired the ball home.

Cappry doubled their lead a minute later when Dean O’Donnell picked up a loose ball on the edge of the box and slipped the ball home at the near post.

Cappry increased their lead on 10 minutes when Dean O’ Donnell completed his hat-trick when he got onto a long through ball and curled the ball into the far corner.

Glenea tried hard to get back into the game and had good efforts from Paddy Scott and Noel Sweeney.

Cappry got their 4th goal on the stroke of halftime when Mathew Wooten headed home a corner.

The 2nd half was a slower affair with both attacks being kept quiet until 75 minutes when Josh Mc Menamin’s cross was deflected in by a Glenea defender.

Team efforts from both sides.

Keadue Rovers Reserves finished off their season in winning fashion with this single goal victory over near neighbours Arranmore United on Friday night at Central Park.

The game was played at a decent pace despite only local pride to play for and with a breeze behind them Arranmore had the better of the opening five minutes with some good possession.

Keadue though were first out of the blocks when Michael Greene’s shot from outside the box was slightly deflected and went to the bottom corner of the net.

The game turned a little scrappy by the midway point of the first half before the visitors had an excellent chance which should’ve seen a leveller as Gary Heaney dragged a shot just wide of the far post.

They stayed well in the game but didn’t really create much in chances or threaten the home goal.

Michael Greene was driving the Keadue midfield and they had a few openings on the right wing but the final ball let them down.

At the start of the second half, Keadue made a few substitutions and they were almost two up on fifty-five minutes, when following a corner, chances fell to Liam Boyle, Jack Ward and Damien Hanlon but all those attempts were blocked.

The visitors also had some decent play as the game ticked towards it’s conclusion with Brian Proctor to the fore and his shot ten minutes from the end looked destined for the net only for a Keadue block.

The home side were once again very close to increasing their lead on eighty-four minutes when Jack Doherty beat a few players on the run but was just wide with his right footed effort.

That was the last major incident of the game and in the end a good victory for Keadue, who finish the season on six straight wins and a place in the top 5.

Meanwhile for Arranmore, a good recent run of results saw them well clear of the relegation scene.

Best for Arranmore were Brian Proctor and Sean O’Hara while best for Keadue were Michael Greene, Brendan Mc Cafferty and Aaron Mc Cafferty.

Castlefin started well and had a few good chances to take the lead but failed to convert them. Castlefin did take a deserved lead when Gary Mc Nulty tapped home at the back post.

Both teams were feeling the pressure coming into this game knowing a defeat for either could put them into the relegation playoff.

Donegal Town started off the sharpest, Matt Mc Kenna and Ronan Mc Hugh with good strikes in the 8th minute but Joe Coll in the Glenea goals equal to the task.

Glenea created a few half chances but found it hard to penetrate the Donegal defence.

Glenea broke the deadlock in the 28th minute, Cathal Mc Geever found Martin Mc Guire unmarked at the back post and he slotted home from 3 yards.

Joe Coll was called into action again early in the second half, a well worked move by Donegal ended with Joe McIntyre striking well from 20 yards, making the keeper work hard.

Glenea found themselves 2 up after 17 minutes with Sean Coll scoring direct from a corner.

Donegal Town kept plugging away, creating good efforts from Eoin Slevin and Ronan Mc Hugh, but again found it hard to get past the in-form Joe Coll.

Donegal Town managed to pull one back in the 83rd minute, a cross to the back post found Mc Hugh to tap in from 5 yards.

A fantastic game played in front of a big crowd, particularly from the away end as they hoped to seal the title on the final day.

After a tight and tense first half Bonagee went ahead early in the second half.

From a Bonagee corner Kildrum keeper James Mc Nulty punched clear and after a heavy knock appeared to be unconscious but play continued and eventually the ball was rolled into the empty net from Cody Brogan.

Bonagee looked set to become champions, however after a defensive error Odhran Mc Macken pounced and levelled the game.

Both teams tried to fashion openings late on but the game ended all square at Station Road.