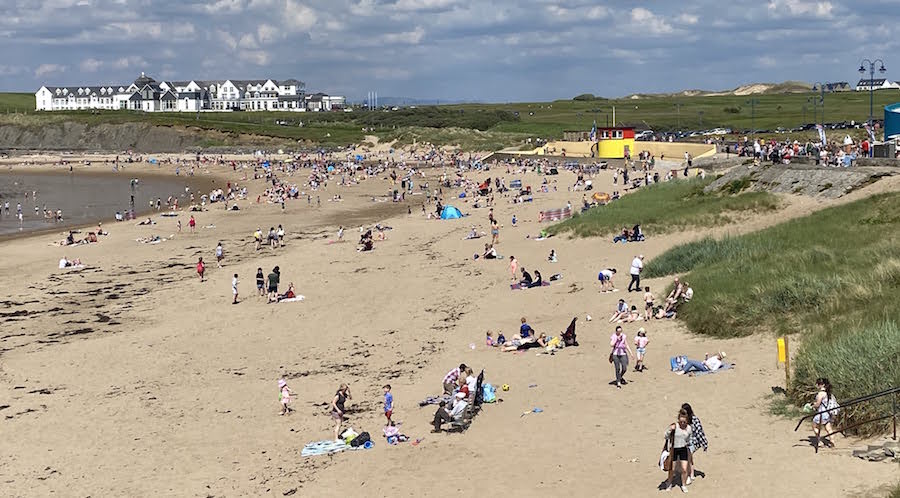 Bundoran delighted to be feeling ‘blue’ about it beach!

The public and community volunteers in Bundoran have expressed their delight at retaining its Blue Flag beach status.

The seaside town now holds one of the country’s 95 Blue Flags which will fly over beaches and marinas across Ireland for the summer bathing season.

In a ceremony at Curracloe Beach in County Wexford yesterday, the flags were presented to each recipient county by Malcolm Noonan TD, Minister of State with responsibility for Heritage & electrical Reform.

The Blue Flag will now fly over Bundoran’s Main Beach daily from June 1st when the bathing season begins.

Councillor Micheal McMahon paid tribute to the staff of Donegal County Council for their continuous hard work in ensuring the retention of the Blue Flag in Bundoran and at beaches and marinas in Donegal.

He said “The awarding of the Blue Flag to the Main Beach and 11 other locations in the county is a testament to the work of council staff and I would like to thank them sincerely for their efforts in ensuring the retention of the flag here in Bundoran and across the county.”

Bundoran Tourism Officer Shane Smyth said the Blue Flag is one of the world’s most recognised eco-labels and Main beach has been passed fully compliant with water quality and other standards this year and has undergone and passed stringent testing.

He added “Bathers visiting Main Beach can be assured of the water quality and standards that are expected at a Blue Flag beach. We are also delighted to see the return of the diving board for this season which will be installed at the start of June in coordination with the lifeguards coming on duty.

“I am pleased to be presenting 95 blue flags and 62 green coast awards today and want to commend the great efforts made by local authorities, An Taisce, coastal communities and volunteers for their work around the country’.

More details on the Blue Flag are available from www.discoverbundoran.com/blue-flag-bundoran

Bundoran delighted to be feeling ‘blue’ about it beach! was last modified: May 20th, 2022 by Staff Writer
Facebook0Tweet0LinkedIn0Print0