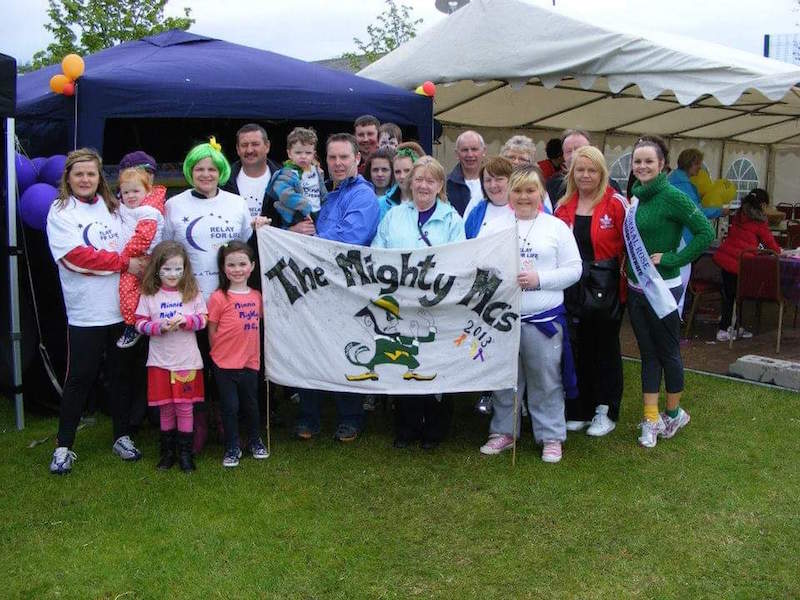 The Mighty Mcs are ready to roar at Relay for Life!

Margaret McCarron was pregnant with her youngest daughter, Christina, when she was first diagnosed with breast cancer thirty years ago.

She survived the illness and twenty-one years later when Christina had reached a milestone birthday, another birth – that of the Mighty Mcs Relay for Life team!

“When Christina was 21 in 2013 we thought that taking part in Relay would be an ideal way to celebrate this and support a cause which means so much to so many in our family,” Margaret’s daughter-in-law, Eve-Anne explains.

The Mighty MCs team is made up of members of the McFeely and McCarrons family and friends embracing the Raphoe and St Johnston areas.

“My husband is Mark McCarron and I’m McFeely and we thought the name, Mighty Mcs, celebrated our two families and our fighting spirit against cancer.”

Both families have been, and continue to be, affected by cancer. “Some very positive outcomes, a couple of less positive ones, but for us Relay creates the opportunity to bring us all together, to support one another and to show gratitude for those that are dear to us.”

Eve-Anne reflects on the past year when two more members of their families received a cancer diagnosis. “Both have been able to get a plan which is hopefully going to lead to a positive outcome. 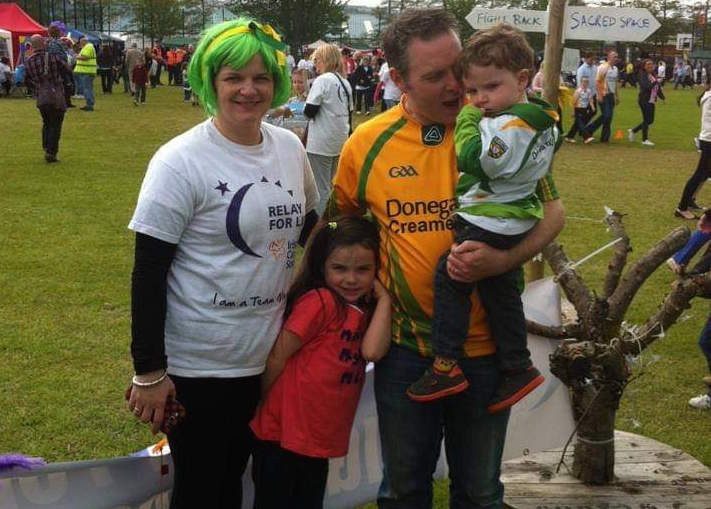 Eve-Anne McCarron and her family at a previous Relay for Life.

“During this we learn how amazing the human body is and also how amazing medical people are and what is possible with a plan.”

And what is possible when people get together to lend their support to one another at critical times.

“I was chatting to my two daughters about how our family are dealing with cancer for their uncles. The conversation came up about Relay and it was them that said, we should relay, it’s more important than ever.”

And now the Mighty Mcs are preparing for the 2022 Relay for Life initiative and looking forward to playing their part.

Says Eve-Anne: “We’ve taken part in Relay for Life now four times and it has such a positive impact on all of us. It’s not just our families but our friends that join us on this walk. No one is alone when they walk with the Mighty Mcs and the Relay does that for everyone.

“Strangers walk side by side, share their stories and experiences and we all feel we’re in this together fighting back as that’s all we can do.”

Recently the Mighty Mcs hosted a table quiz in Friel’s of Raphoe , with sixteen teams taking part. “We raised 900 euro as a result.”

It was billed as a fun quiz and one of the participants, Joanne Barr, confirmed it. “Great night’s craic was had by all,” she told her Facebook friends.

And second year students of Deele College Raphoe, inspired by Eve-Anne’s daughter, Ella, held a bake sale which yielded a tasty 650 euro for the Relay initiative.

The Mighty MCs want to thank all who were involved including those who toiled in their kitchens to bake for the event and those who donated goods for the occasion.

“Ella approached her year head, Tara Friel, about a bake sale and she agreed and made it an event run by the second years.”

Reflecting on the Relay initiative, Eve-Anne insists: “There’s a healing in it and a power in it.”

Eve-Anne’s brother, Patrick, who is also a survivor, will be coming home from London to take part this weekend.

The Mighty Mcs are ready to roar at Relay for Life! was last modified: May 26th, 2022 by Staff Writer
Facebook0Tweet0LinkedIn0Print0