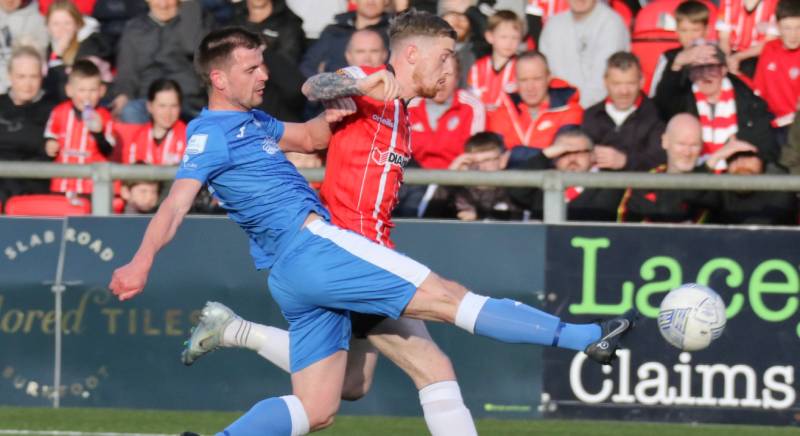 An Eoin Toal header in the 94th minute left Finn Harps cursing their luck as the North West Derby ended 2-2 at the Ryan McBride Brandywell Stadium.

Ollie Horgan’s side took the lead in the first 10 minutes through Filip Mihaljević but a Will Patching free-kick from over 30 yards out had the two sides level at half-time.

Eric McWoods got the away side ahead again just after the hour mark and it looked like they would be getting another famous win in the Brandywell. 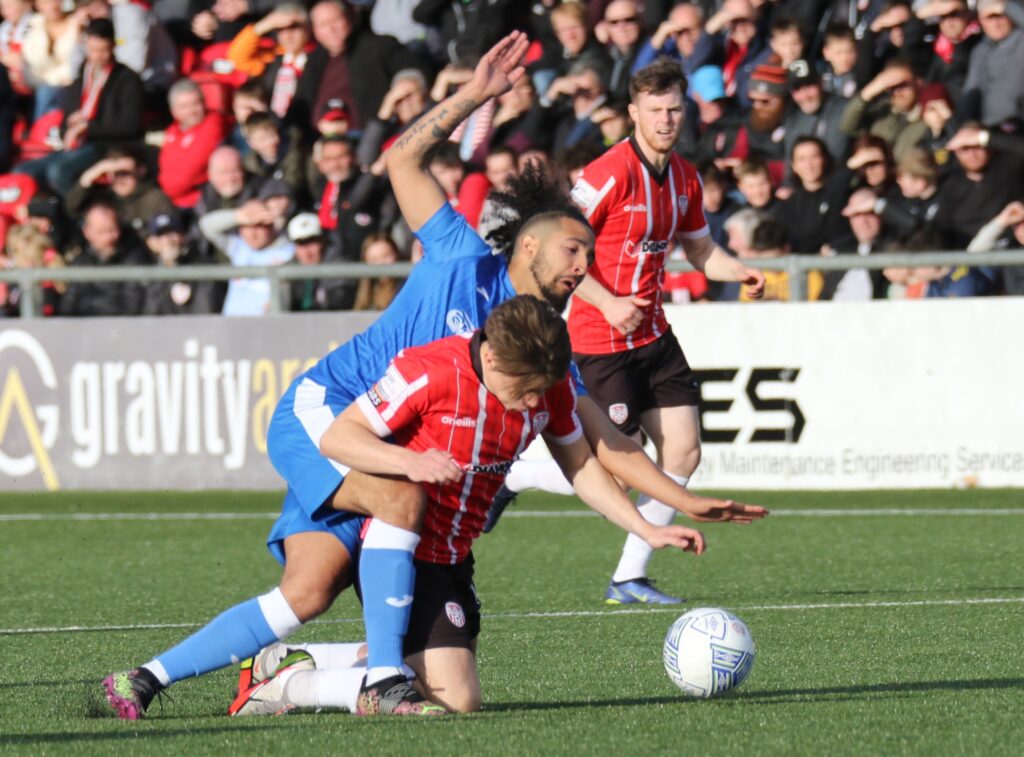 But in the fourth minute of five added, a Patching cross found Derry captain Toal and his looping header went over McGinley and into the back of the net to share the spoils.

The two rivals were both desperate for a win, with Finn Harps losing four in a row before tonight.

Harps could take some solace in the fact that Derry City were the only Premier Division side without a win in their previous five games. 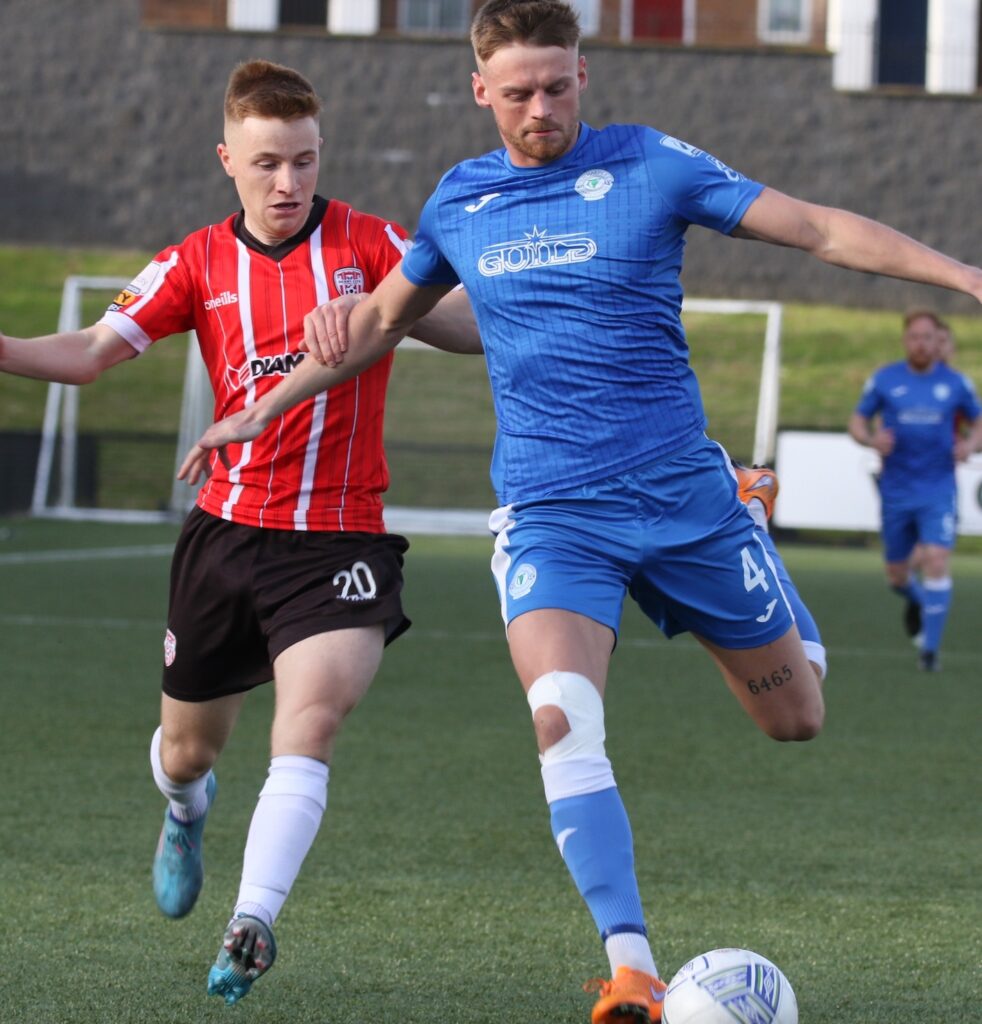 The Candystripes are still second in the league however despite this dip in form and as they say in a derby game, form goes out the window

Both sides had early chances from dangerous corners but Derry gave away a free-kick when attacking and Ethan Boyle was caught offside for Harps.

Harps would take an early lead though when José Carrillo’s cross to the edge of the box was laid off by Ryan Rainey into the path of Mihaljević. 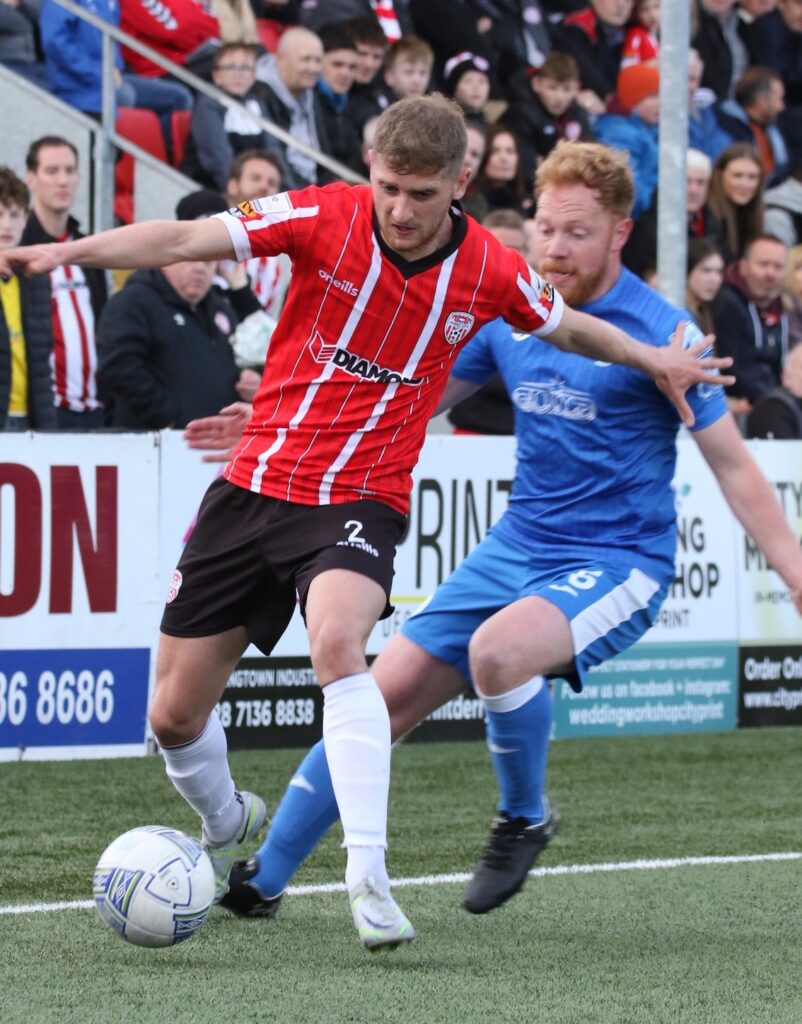 The Croatian striker took a touch and smashed the ball low and hard into the far corner after eight minutes.

McWoods was causing the Derry defence all sorts of problems.

Five minutes later, Ollie Horgan’s side were agonisingly close to going 2-0 up when Regan Donelon’s free-kick hit the crossbar. 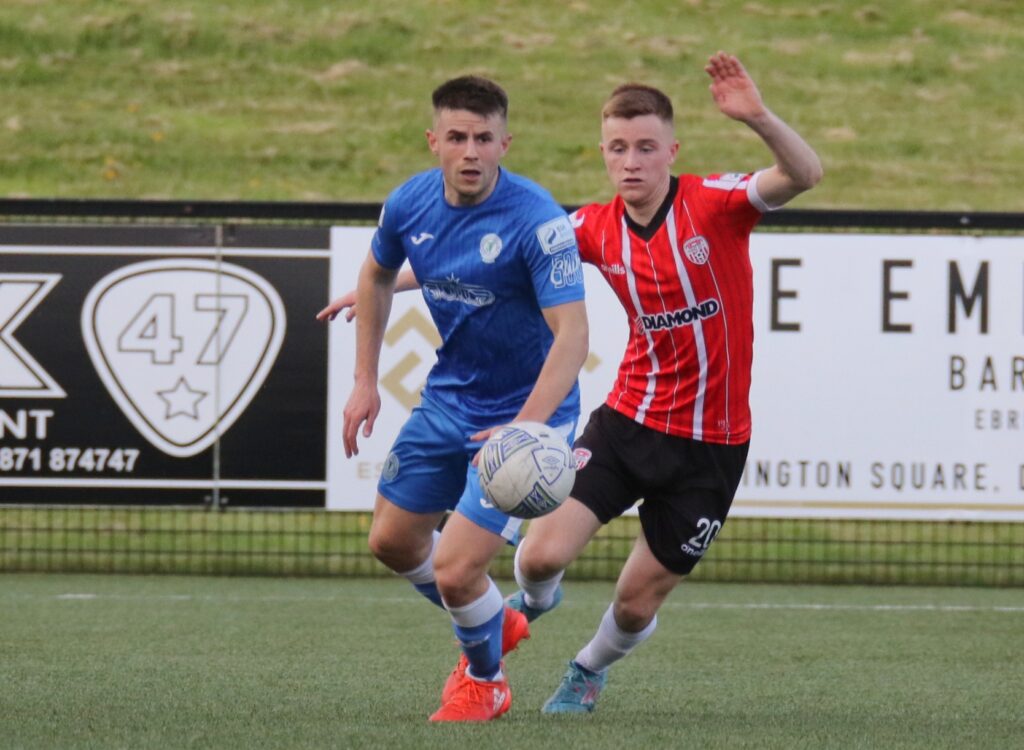 And with one free-kick going close at one end, Will Patching made no mistake with a free-kick on the other end.

His strike from over 30 yards out caught Mark Anthony McGinley out and levelled the sides after 22 minutes.

The second quarter of the game was quiet with McWoods still causing problems but Maher was never tested while a Jack Malone shot from outside the box went wide of the Finn Harps goal as the sides went in level. 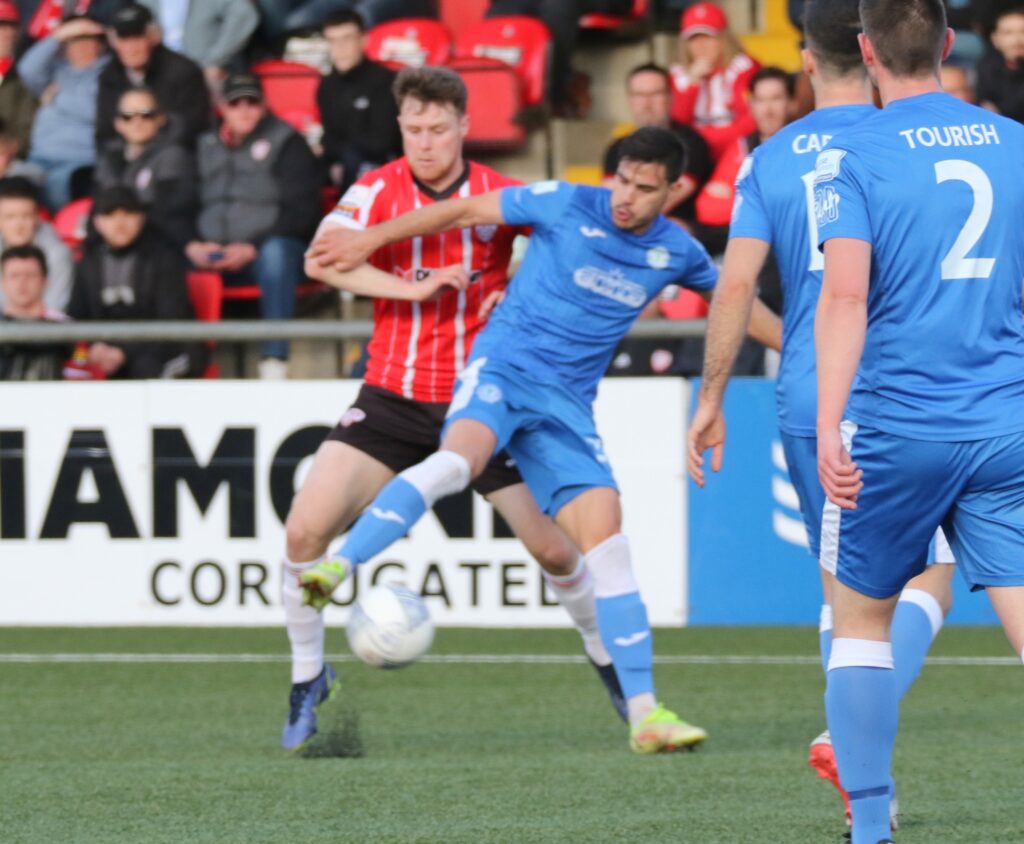 Finn Harps looked revitalised in the second half and started the better as they had three corners in the first 90 seconds, with Conor Tourish going closest from the first with a front post flick.

And it was just after the hour mark when Finn Harps would retake the lead after a bit of pinball in the middle of the park, Bastien Héry did well to control the ball and beat the Derry marker.

He then found McWoods trying to break the offside trap and he raced onto the ball on the right hand side of the box. He cut in past Eoin Toal and struck to Maher’s front post to give the away side the lead. 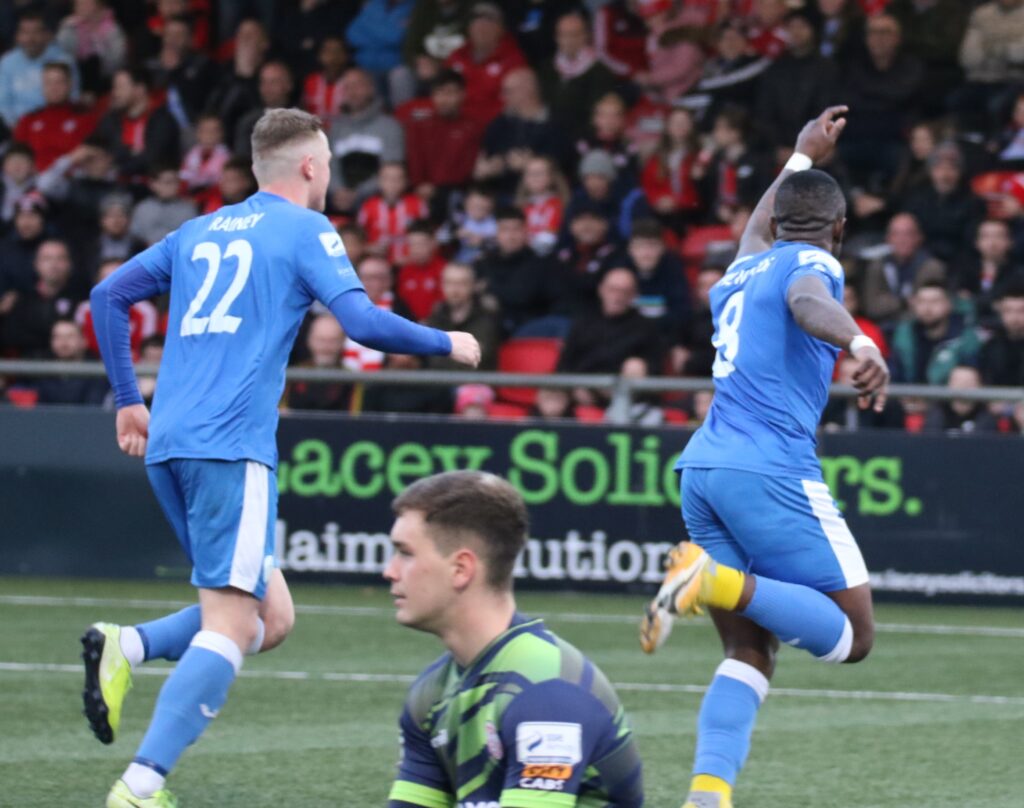 And a couple of minutes later, it should have been 3-1.

Donelon’s enticing free kick was flicked on by Tourish but the former Letterkenny Rovers man couldn’t get enough on the header.

But with time ticking down slowly for Finn Harps, Derry began to press as first Evan McLaughlin’s dangerous cross was inches off Jamie McGonigle’s head. 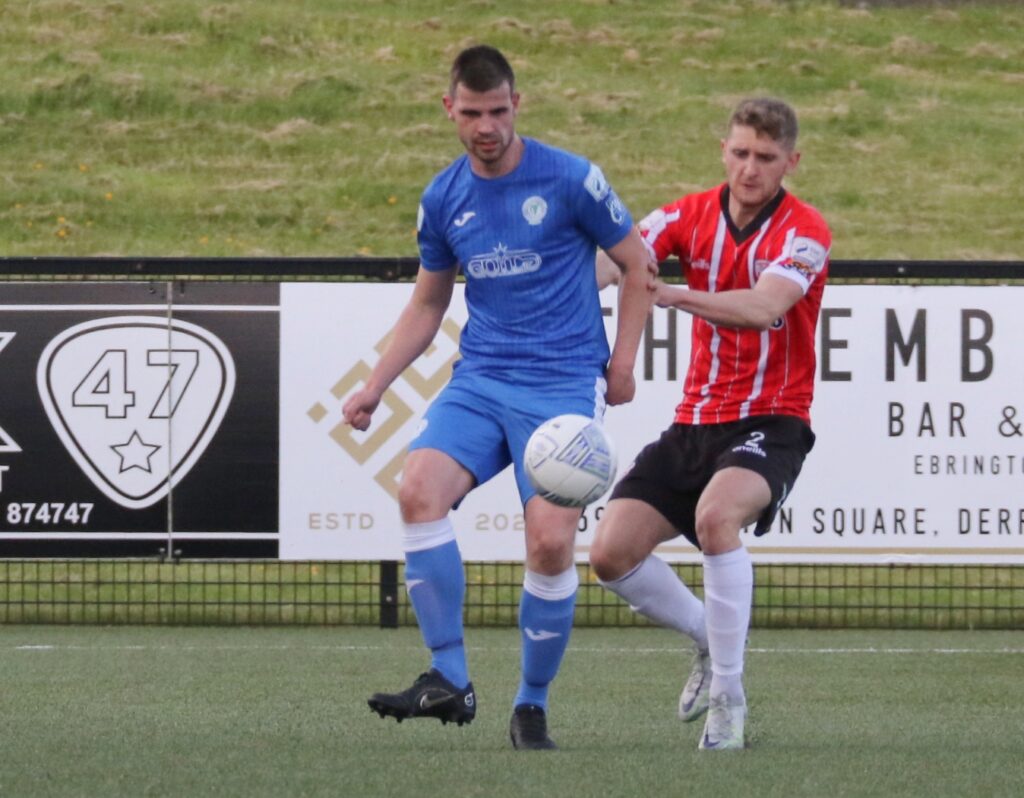 With five minutes to go, Derry had their best chances, firstly with an Akintunde cross which was controlled by Ronan Boyce and the Ramelton mans volley was brilliantly saved by McGinley.

Seconds later, Will Patching caught the ball on the volley from 25 yards out and it went narrowly wide.

Almost a carbon copy of the previous chance, an Akintunde cross just missed Matty Smith and the clearance fell to Danny Lafferty outside the box but his shot went just wide of the goal. 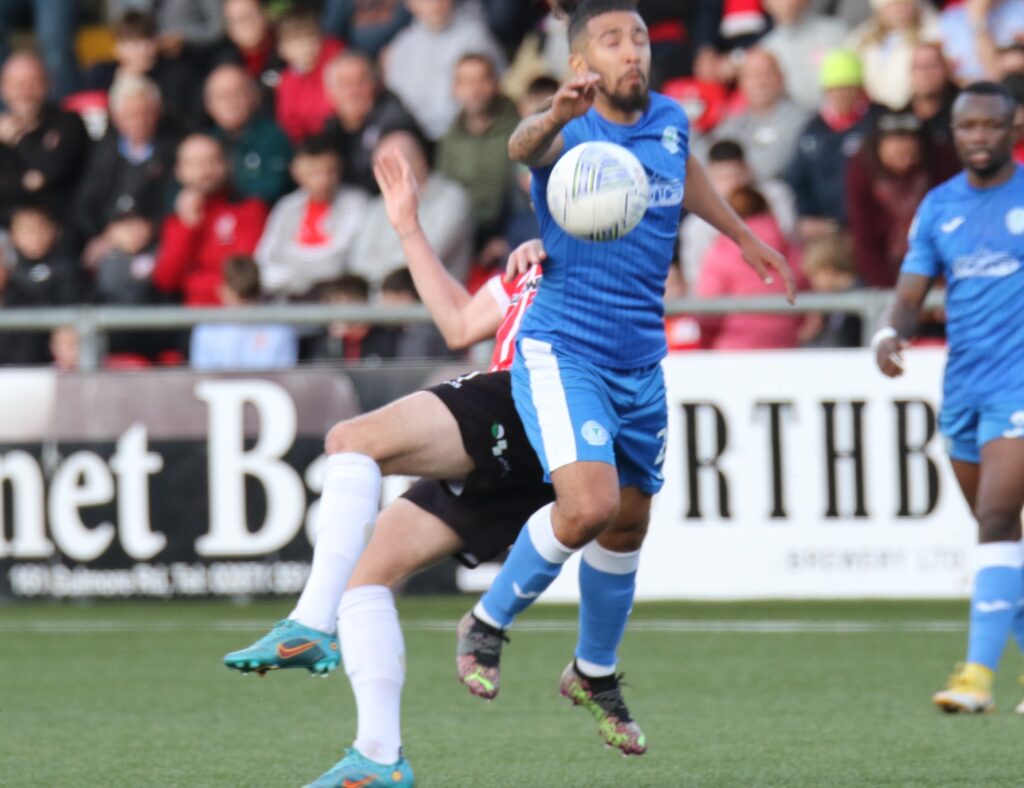 Luke Rudden tried to catch Maher out from a similar area to Patching’s goal but to no avail as Harps couldn’t keep possession.

A scramble in the 93rd minute from a Patching free-kick went out for a corner whose second attempt at a cross found Toal at the back post and he floated his header into the corner over McGinley.

Finn Harps stay 9th, still two points ahead of UCD with The Students drawing with Sligo Rovers, while Derry move down to 3rd. 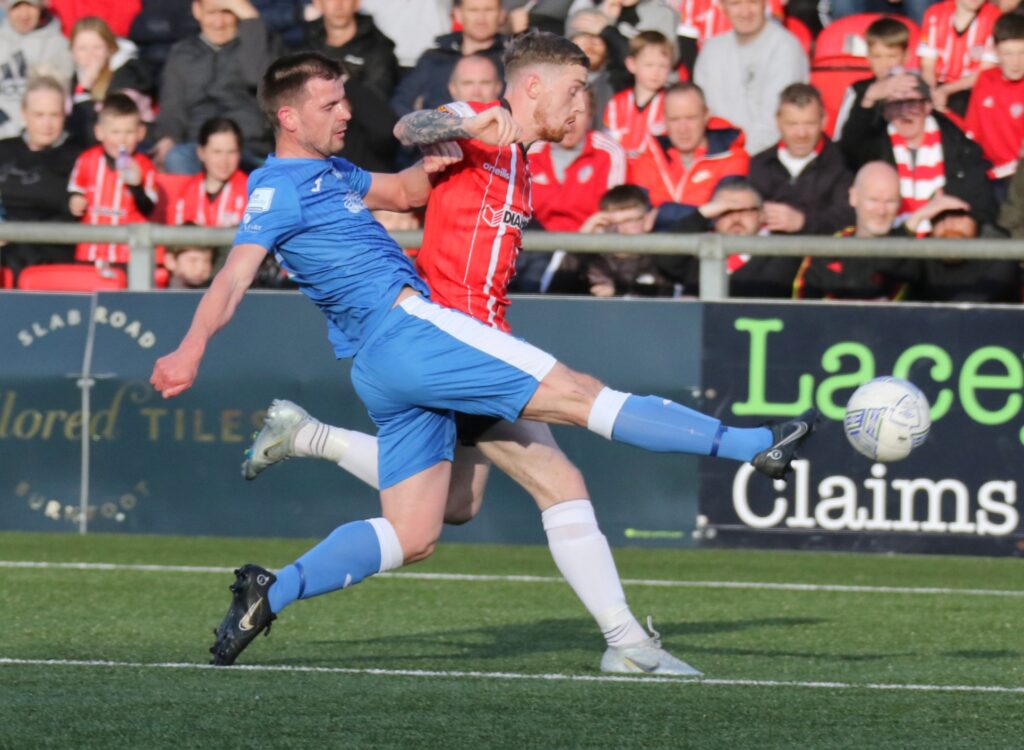