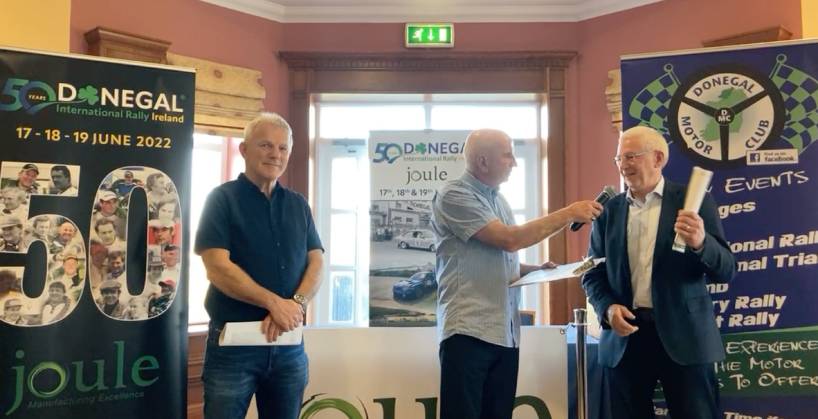 The launch of the 50th anniversary of the Donegal International Rally took place tonight at the Rosapenna Hotel & Golf Resort in Downings.

A huge crowd came to the launch, compered by Charlie Collins and there were plenty of familiar faces, from organisers and committee members to past winners in the crowd.

The first six stages will take place on Friday 17th June, two weeks today, and the final six of the 20 stages conclude on Sunday 19th June.

After a two year break from the rally due to Covid restrictions, the build-up to this year has spectators and competitors alike excited, with 210 entrants for the 3 day race, the highest number of entrants it has seen.

Cahal said on the rally: ‘I hope the people of Donegal realise how important this event and the club is.

“I’ve rallied all over the UK and Belgium and there’s nothing that touches the Donegal International Rally. Nothing in my lifetime comes close to it.”

When asked about what specifically is his favourite thing about the weekend, he couldn’t narrow it down.

“There’s no one item, there’s so many aspects. The stages are unique, the people, the club, the spectators, competitors, the massive number of competitors show how popular it is.”

Seamus McGettigan, who was co-driver for Vincent Bonner in 1983, became the first local winners of the rally and remember it well.

Seamus said: “We enjoyed every minute of it, everything went right.

“We couldn’t get excited until the last stage and the celebrations went on for weeks!”

James said: You always remember the good days but there wasn’t that many of them, were plenty of ups and downs, there was a few we should’ve and could’ve won but then the next one came.”

Rory added: “This sport is a great education because it teaches you how to deal with the disappointments and when you win so it”s very much a leveller.

“It’s the first since 2019 and with the tragic circumstances of 2019 with Manus Kelly, it was maybe no harm there was no rally for the past couple of years because it has allowed us that time to reflect and give us time to come to terms with what happened back then.

“But I think we should celebrate that fact we’re going to be back, I think we’re ready for it and if Manus was here today he’d encourage us all to get back out there and get flat out again.”

If you missed the launch, you can view it here: