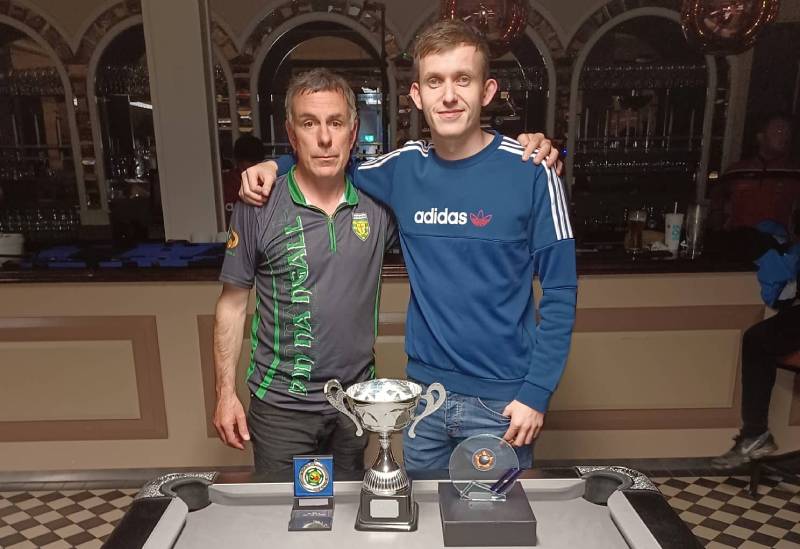 Shaun Sharkey made it an incredible six titles in a row to be once again crowned the best pool player in Donegal after coming back to beat Tony Mulhern 9-8 in the final of the County Championships.

After a three-year hiatus, the ninth staging of the Championships proved to be its biggest weekend yet in The Orchard, Letterkenny.

Thanks to the tireless work of the committee, spearheaded by Chris McAnaw, Anthony Anderson and Kevin Cassidy, the event was successful and the number of competitors were at an all time high.

Friday night saw the crowning of three titles. In the Under 23 event, Andrew Mullen was not going to be denied, beating some very good opponents before seeing off the precocious talents of 15-year-old Ben McMenamin in the final. 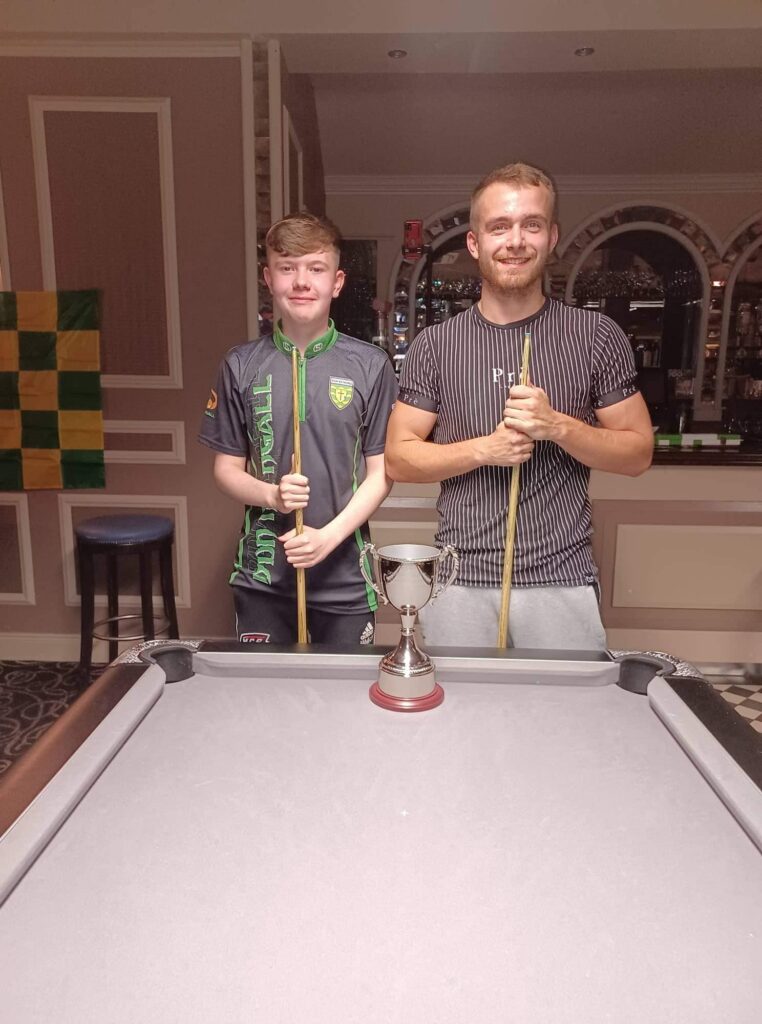 David Moore was in imperious form in the over-40s; the former county singles and Ulster over-40s champion saw off a determined Bernard Diver in their final to add another title to an already bulging trophy cabinet. 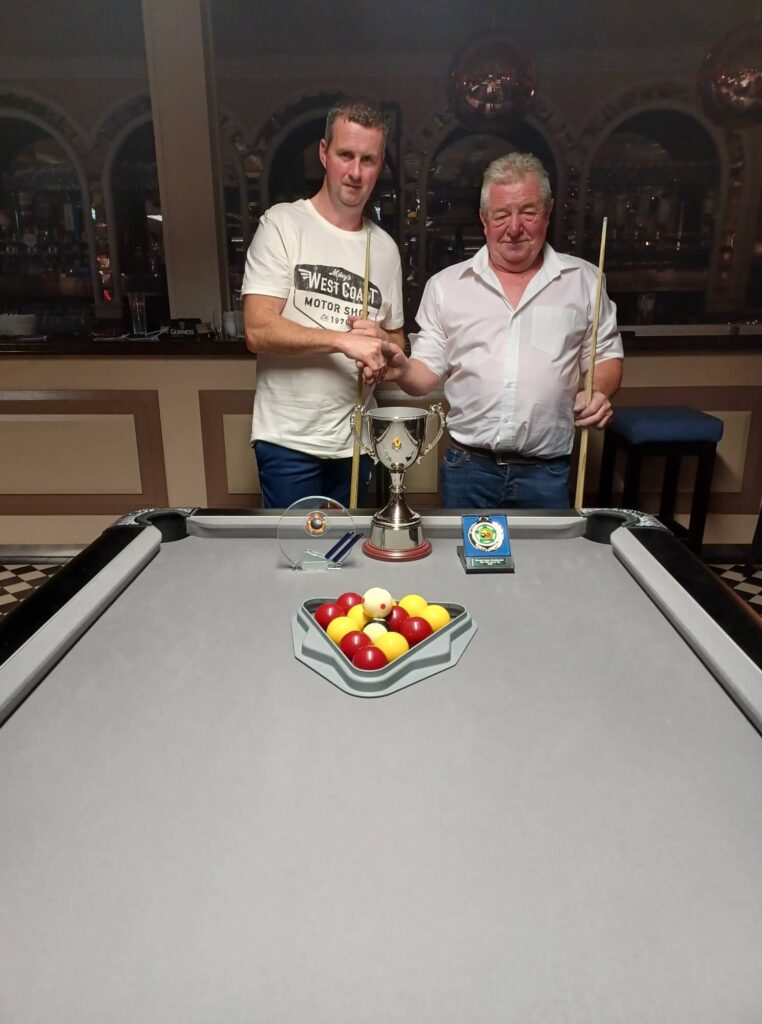 Over 40s winner, David Moore, with runner up, Bernard Diver

And Helena Melly followed up her recent success in the Irish championships with victory over Bundoran’s Mini Morris in the ladies’ event for yet another successful defence of a title by the peerless Rosses woman. 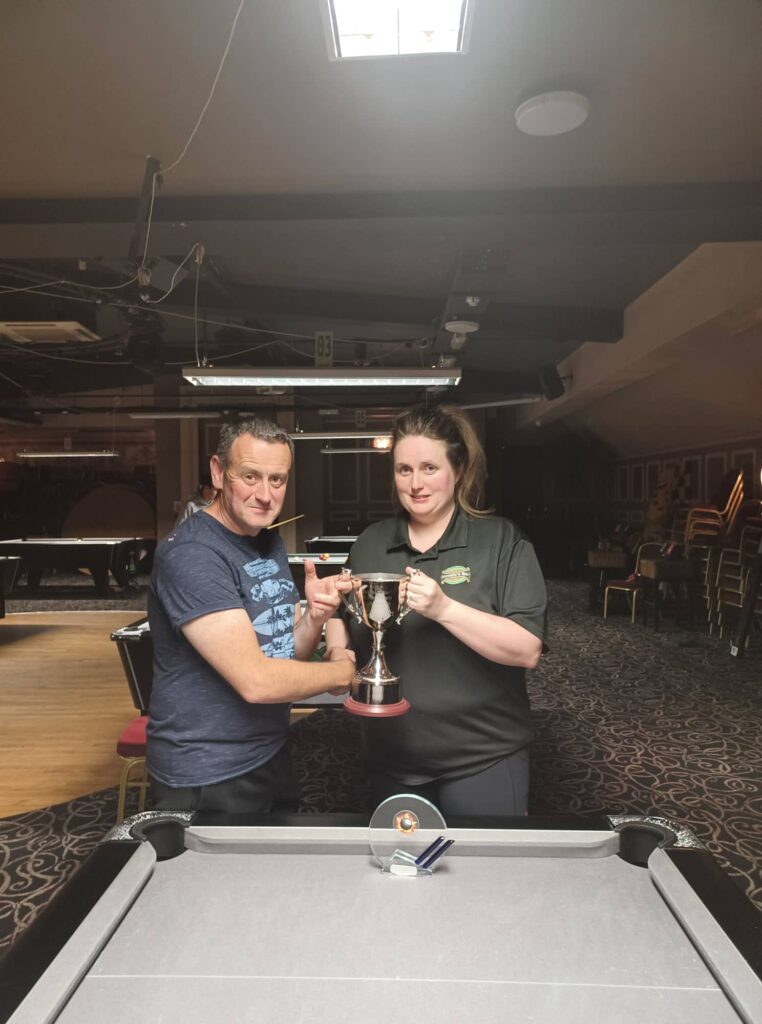 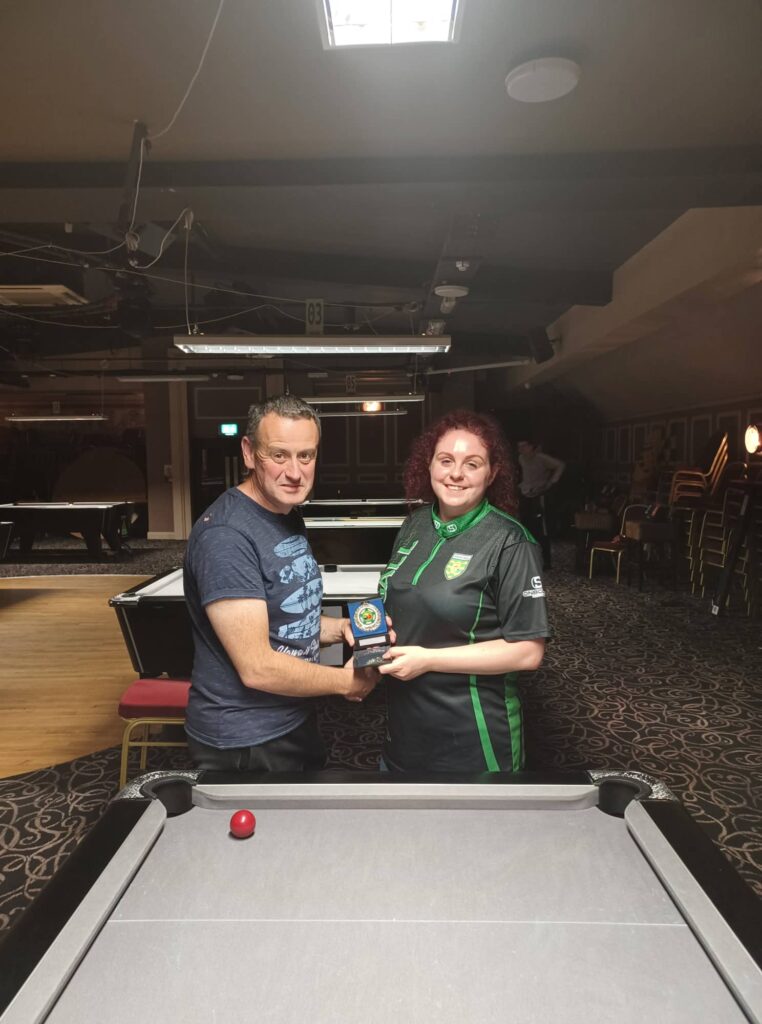 The big day is always Saturday when the team events take centre stage. Sixteen teams battled it out throughout the day for the ‘A’ and ‘B’ titles.

The team representing Doherty’s Bar, Ardara, were a somewhat unknown quantity in the B event but, bolstered by the talents of snooker player Ronan Whyte, and backed up by a great performance from young Daniel McHugh in the final, they ran out 9-6 winners over Gabriel McAteer’s experience outfit to secure the title. 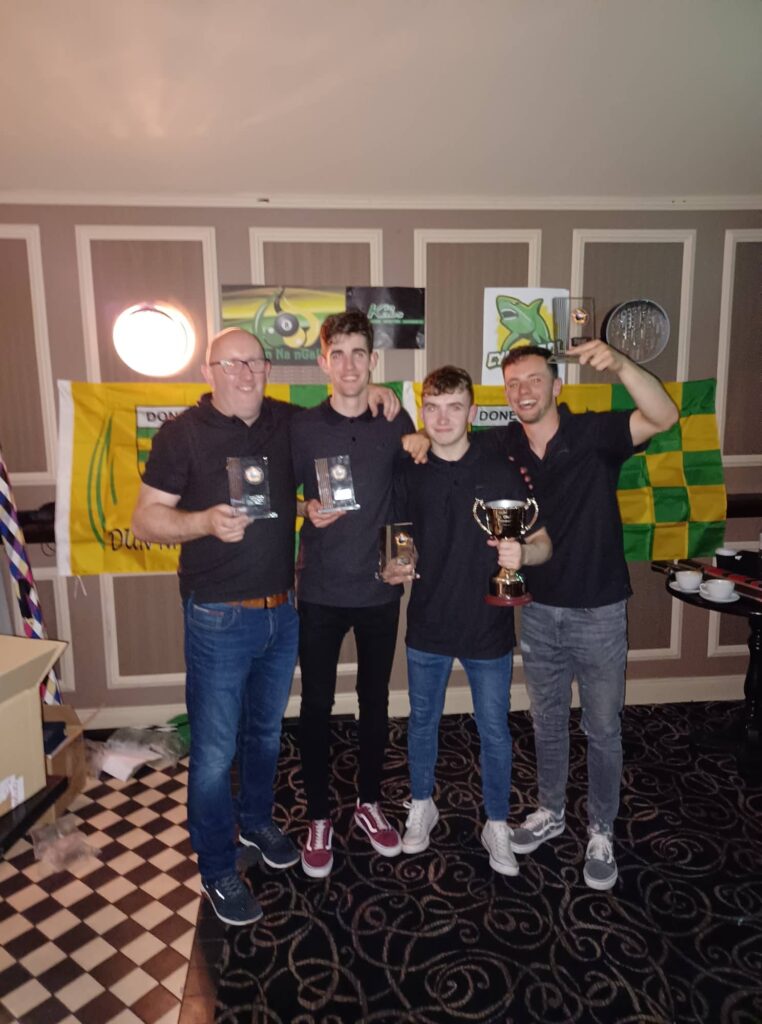 The same scoreline decided the A final, when the self-titled “West Derry” team were too strong for Owenie’s Bar, Dungloe. With a cultured combination of snooker backgrounds and tactical nous, the Inishowen lads took an early grip on the match and never relinquished it, emerging as fairly comfortable winners amid joyous celebrations. 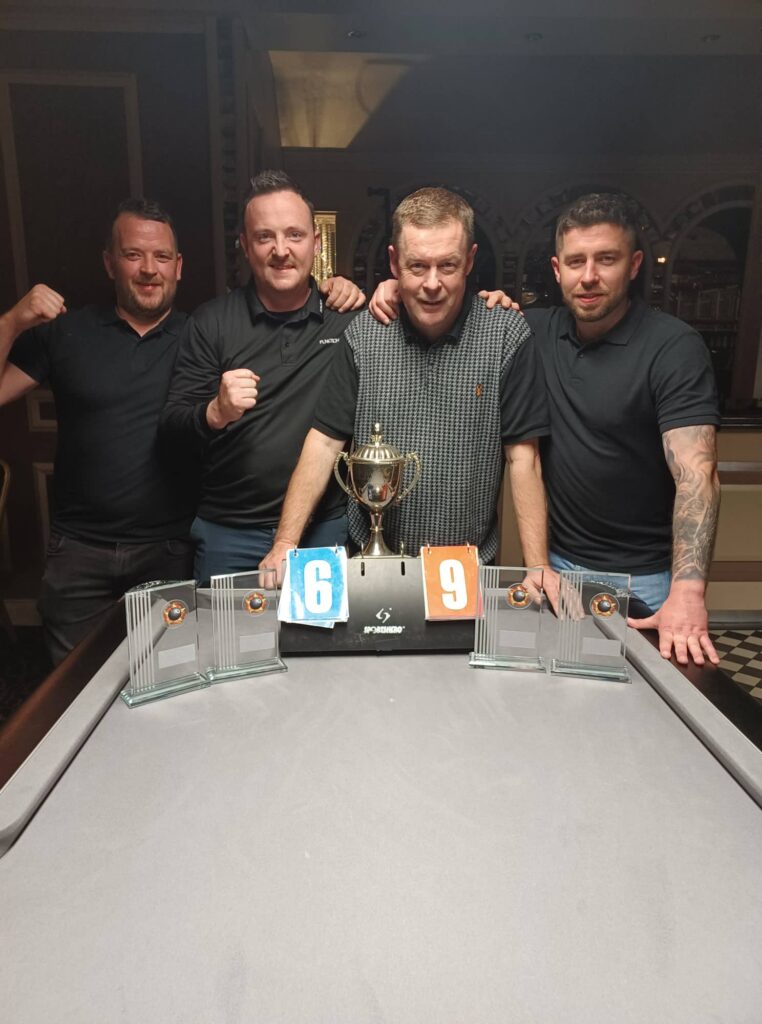 A massive turnout of players returned on the Sunday to battle it out for the right to be called Donegal’s best pool player.

The favourite, Shaun Sharkey, was chasing his fifth title in a row (and sixth in total), but the fact that Donegal were All-Ireland team champions in 2021 pointed to the fact that there were plenty of players capable of ending Shaun’s amazing run in the event. 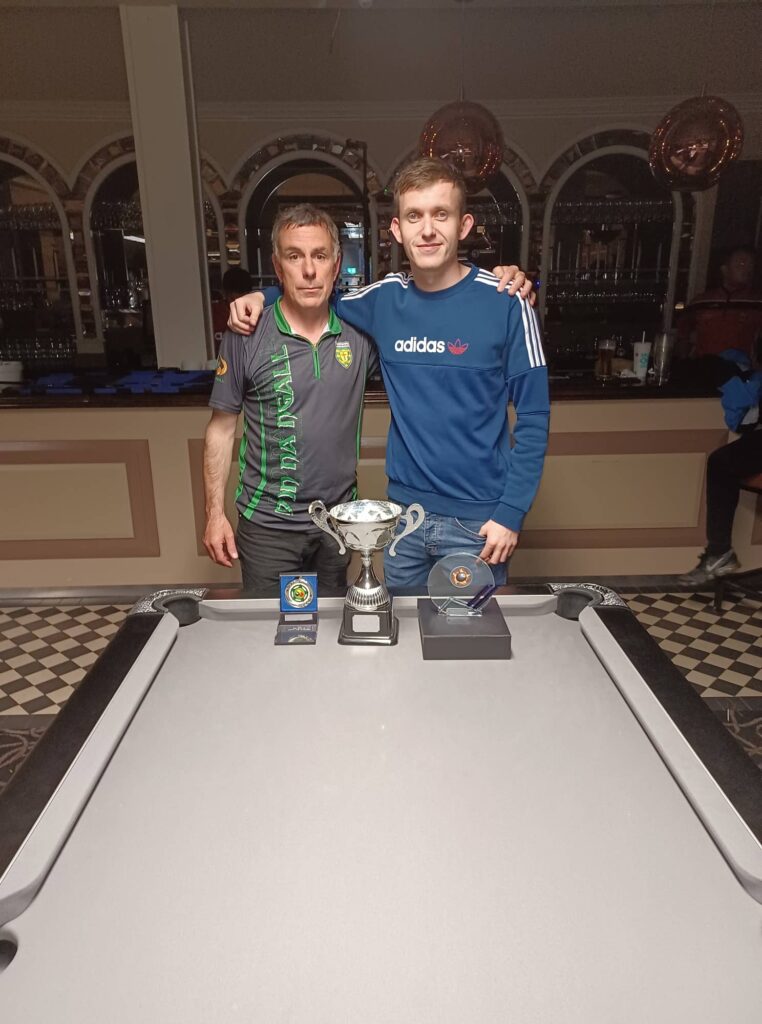 After a number of close encounters, especially against David Moore and Lee Murrin, Shaun found himself back in another final, this time against the experienced talent of Gweedore’s Tony Mulhern, who beat Liam Travers in a final frame decider to earn his place.

Tony was undaunted by Shaun’s reputation and came out of the blocks flying. Indeed, at 8-6 up and needing just one more frame for victory, it looked odds-on that Tony would be the man who would finally dethrone ‘The Shark.’

But, in a carbon copy repeat of Shaun’s recent All-Ireland final singles victory, he again refused to accept defeat, winning the remaining three frames to secure the title in enthralling fashion and leave Tony crestfallen.