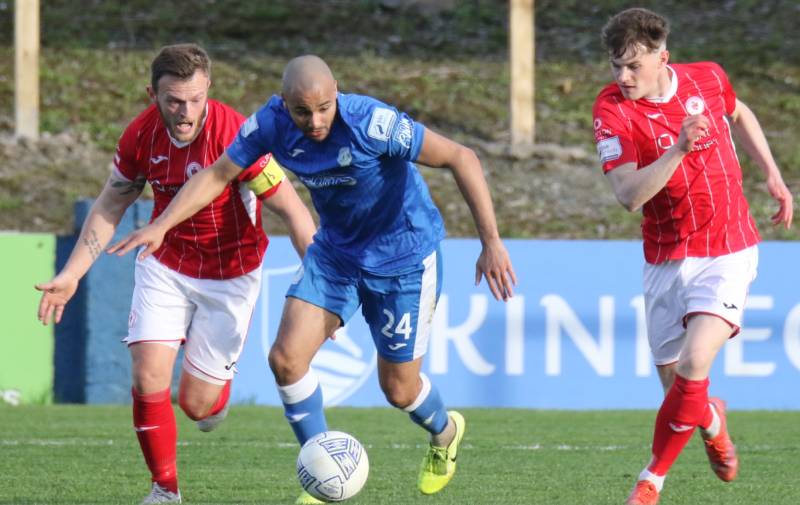 An Aidan Keena brace either side of the game saw Sligo Rovers send Finn Harps home with a 5th defeat in their last six games while Karl O’Sullivan capitalised on a Mark Anthony McGinley error.

Sligo had the better of their opponents twice already this season and would have been hoping for a third win which would see them move back into 5th.

Harps meanwhile were hoping to extend their gap ahead of UCD at the bottom of the table and build on their draw against Derry City.

After a period of three weeks without a game, it would have been excusable if both sides were rusty from the beginning, but it was only the case for Finn Harps.

Sligo came out flying and when Rob Slevin’s block of Karl O’Sullivan’s cross inside two minutes fell to Keena, it would quickly be 1-0 to the home side.

The striker’s shot from the edge of the box was low and hard, going straight into the far corner.

Harps barely had time to recover when Sligo doubled their lead.

A long ball from Donegal man Shane Blaney held up in the wind and the bounce fooled McGinley, while O’Sullivan was quick to pounce, getting to the ball first and tapping into the empty net.

Paddy Kirk could have made it three inside ten minutes as he weaved through the sea of blue defenders but his shot was straight at McGinley.

Sligo were enjoying success from diagonal balls to their front men when the Harps wing backs pushed up, allowing John Russell’s side to exploit the space.

The first and only Finn Harps chance of the half came after 13 minutes when Filip Mihaljević played McWoods through.

The American evaded the offside trap but the ball held up in the ground as Kirk was able to catch him, but McWoods cut inside, beating his man before his curling shot was saved by Ed McGinty.

Straight up the other end Ollie Banks had a shot from outside the box go just wide as the tempo of the game began to slow.

It wasn’t until the half hour mark that the next chance would fall, but Sligo had three chance in a matter of minutes.

First, Keena dribbled into the box and when tackled, the ball fell to Fitzgerald but the shot was blocked.

The ball went out for a throw-in and Keena’s cross found Max Mata who forced a good save from McGinley but Mata was called out for offside.

Moments later Mata had another good headed chance but he didn’t connect right with David Cawley’s corner and a free out was given.

McGinley was called into action again before half time when tipping over Cawley’s shot from outside the box, while Kirk also went close with a powerful shot over the bar.

The second half started bright again for the Bit O’Red as Mata looked to be through after 20 seconds, but the Kiwi was offside.

Dylan Duncan was introduced as a half-time substitute and was booked for diving in the box on the hour mark, with very few complaints from the debutant.

Mata did well to play Keena through and the striker was through one-on-one but he hit his shot wide.

Chances were few and far between in the second half, with McWoods’ cross parried by McGinty but no Harps player could get to it before the Sligo ‘keeper smothered the ball.

McWoods again troubled the Sligo defence as he cut in from the right but McGinty saved easily.

Sligo would get their third as O’Sullivan’s cross second time round found Keena and he towered over the Harps defence to head home his 9th goal of the season and his 5th against Finn Harps.