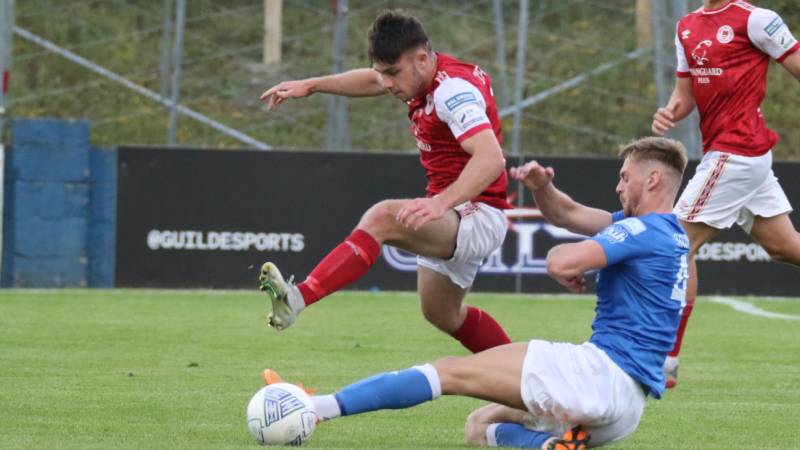 A Billy King brace looked to be enough at Finn Park but late goals from defenders José Carrillo and Ethan Boyle rescued a point for Finn Harps.

King opened the scoring after six minutes when Mark Doyle’s cross came to him and he fired low past Gavin Mulreany.

His second came just after the hour mark when he turned and smashed the ball into the corner of the net.

But Harps gave it their all and José Carrillo got one back with two minutes of normal time left.

And an Ethan Boyle header after a corner in the 96th minute gave Finn Harps a point, much to the delight of the Finn Harps faithful who didn’t leave when the game looked over.

Finn Harps were hoping to bounce back after a 3-0 loss to Sligo Rovers at the Showgrounds last week, while St. Pat’s came back from the summer break with a win over bottom of the table side UCD.

It was a debut start for Dylan Duncan, while Mulreany made just his second league start for Finn Harps, having also started in the 2-2 draw with Drogheda United at Finn Park.

Meanwhile, St. Pat’s made one change from the 2-1 win over the Students, with the goalscorer King coming in for Jay McClelland.

Ollie Horgan’s side would have been hoping to have a better start than last week, when they were 2-0 down after seven minutes, but it would be around that mark that they would concede the first goal tonight. 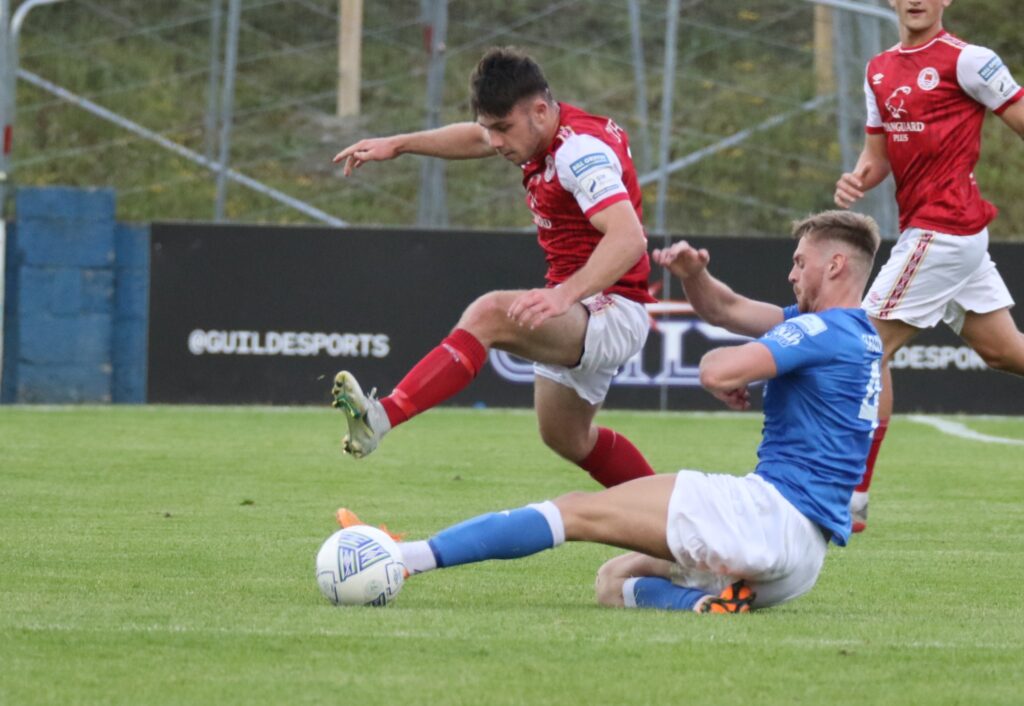 The Saints started the game bright and could have scored twice in the opening minutes.

Initially, Eoin Doyle found Darragh Burns on the right and he was 1-on-1 with Mulreany, but the Inver man saved well to put it out for a corner.

From the resulting corner, Chris Forrester’s cross was met by Sam Curtis, but the 16-year-old’s header went just over.

At the opposite end, Barry McNamee’s cross to the back post was headed straight at Joseph Anang by Ethan Boyle.

Tim Clancy’s men then went up the other end after a slip by Boyle, Mark Doyle was free on the left and his cross to King was met well by the Scotsman who fired past Mulreany. 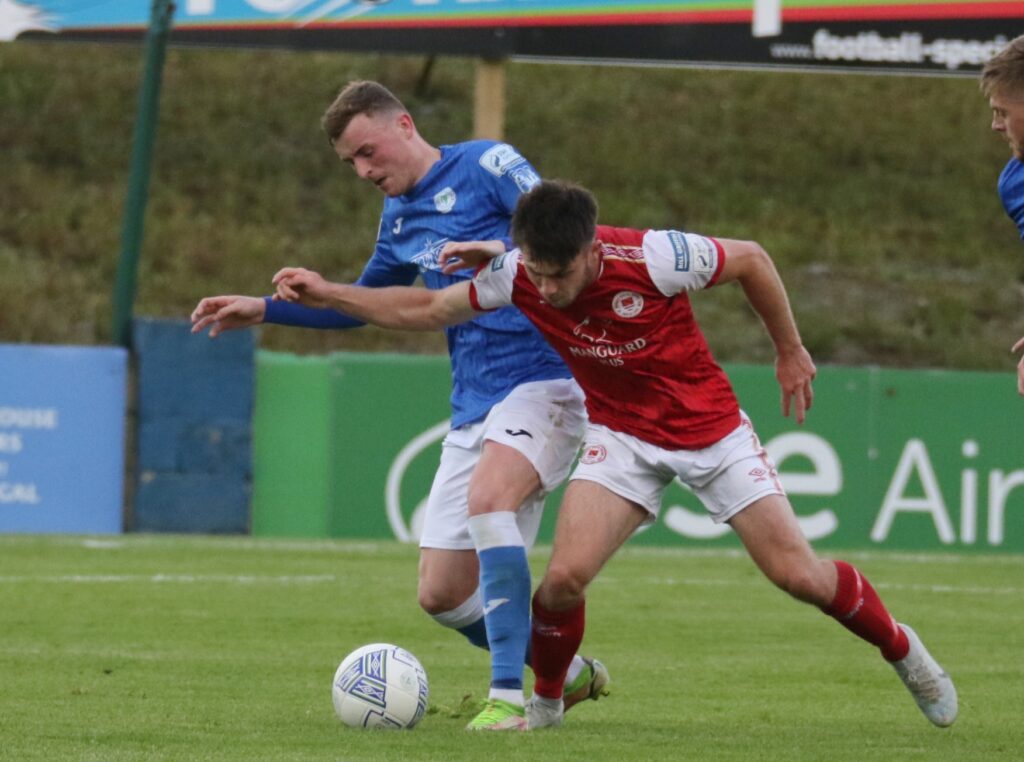 St. Pat’s looked to extend their lead but Boyle made a great last ditch tackle to prevent Burns getting through.

Eoin Doyle went through 1-on-1 with Mulreany but again the Harps ‘keeper won the battle, while O’Reilly and Forrester had curling efforts go wide.

Harps meanwhile, had a couple of chances from Boyle’s long throws, firstly Slevin’s header was saved, then when Anang came out and spilled the throw, Boyle’s chip over Anang was headed away.

The visitors went into the break 1-0 ahead and in the second half, they almost made it 2-0 after Burns was in space on the right and his low cross found Eoin Doyle but once again Mulreany was equal to the shot.

Harps were almost caught out from a quick corner as Forrester got into the box and Curtis’ shot was deflected for another corner. 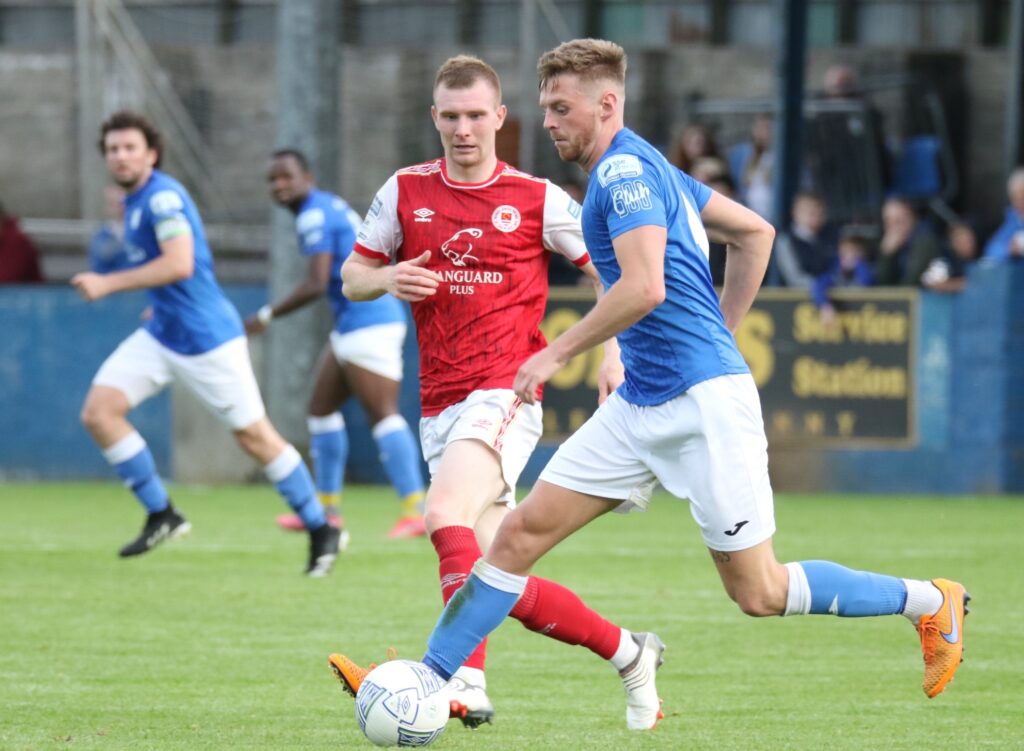 The following corner again was played to the front post and Mark Doyle’s shot trickled wide.

The Saints did get their reward for their chances after the hour mark as King turned well just on the left of the centre of the box to give himself time and space, and his powerful shot from 20 yards swerved into the far corner.

Eoin Doyle was left with his hands on his head when Anto Breslin’s low cross looked a certain goal but he somehow shot over the bar from inside the 6 yard box.

Harps made a double substitution as Luke Rudden and Carrillo came on while St. Pat’s made a quadruple substitution and Sam Curtis was stretchered off following a long stoppage.

In the 88th minute, McNamee’s freekick was controlled by McWoods towards Carillo who finished underneath Anang.

Carrillo then found Rudden and his shot was deflected for a corner but Rainey’s header went wide.

In the 96th minute, a Regan Donelon corner ended up falling to Ethan Boyle, and the defender headed in for his third goal of the season.

Finn Harps stay 9th but gained a bottom on bottom side UCD who lost 1-0 to Derry City. Drogheda drew at home with Sligo, and Dundalk drew in Shelbourne, both 0-0. Shamrock Rovers defeated rivals Bohemians 1-0 in the remaining fixture.