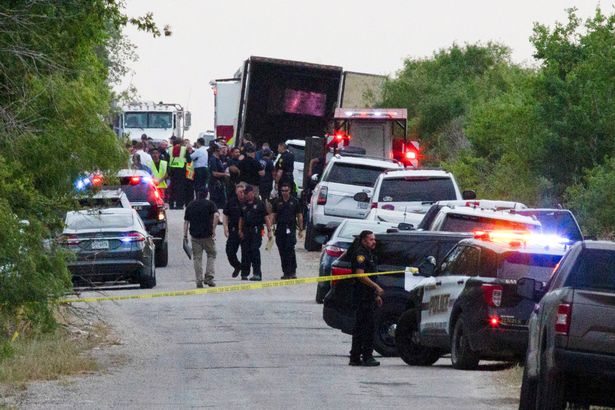 US: 46 bodies found in truck in Texas

The gruesome discovery of 46 bodies in a truck in Texas has sparked a huge police investigation.

Three people are in custody after the bodies were found in a lorry trailer containing suspected migrants on the outskirts of San Antonio.

Police chief William McManus said it was unclear if those arrested were connected with human trafficking.

A further sixteen people were taken to hospitals after the lorry was found on a remote back road.

A city worker at the scene was alerted to the situation by a cry for help shortly before 6pm on Monday, Mr McManus said, adding that officers arrived to find a body on the ground and a partially opened gate to the trailer.

Of the 16 taken to hospitals with heat-related illnesses, 12 were adults and four were children, said fire chief Charles Hood.

The patients were hot to the touch and dehydrated, with the trailer lacking water or air-conditioning, he said.

“They were suffering from heat stroke and exhaustion,” Mr Hood said. “It was a refrigerated tractor-trailer, but there was no visible working AC unit on that rig.”

San Antonio Mayor Ron Nirenberg said the 46 who died had “families who were likely trying to find a better life”.

“This is nothing short of a horrific human tragedy,” Mr Nirenberg added.

It may be the deadliest tragedy among thousands where people have died attempting to cross the border from Mexico in recent decades.

US: 46 bodies found in truck in Texas was last modified: June 28th, 2022 by Staff Writer
FacebookTweetLinkedInPrint