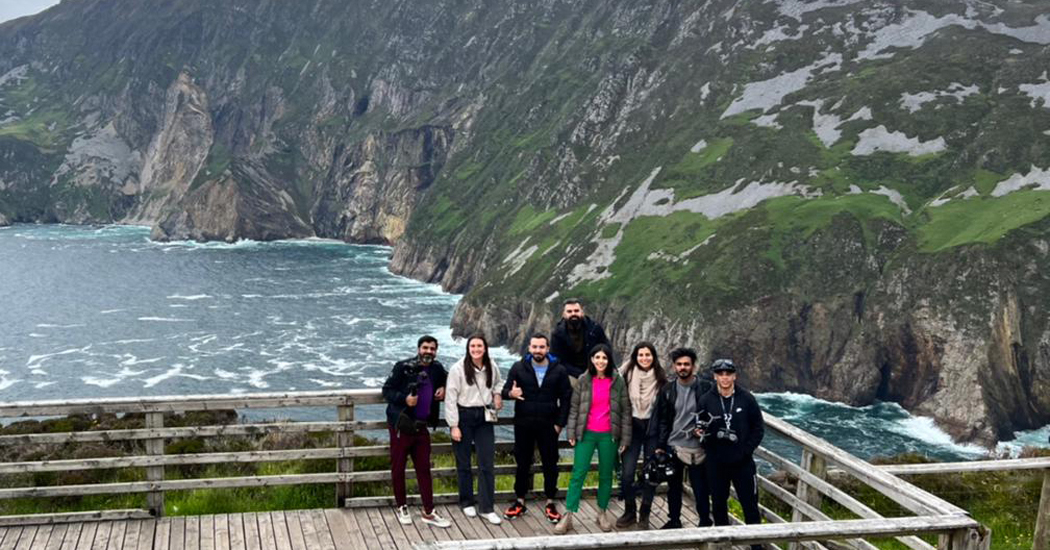 Images of Donegal and Ireland will be beamed into the homes of millions of TV viewers across the Middle East this summer.

Tourism Ireland in Dubai invited TV presenter Haya Yasmeen Nasser to film here for Travel With Haya, a travel segment on a popular morning TV show called Sabah Al Khair Ya Arab (meaning ‘Good Morning Arabs’) which broadcasts on MBC1 to around 40 million viewers across the Middle East and Africa.

The crew has been filming here for three different segments, focusing on our spectacular scenery, rich culture and luxury tourism offering.

The action-packed itinerary – designed in conjunction with Fáilte Ireland – saw Haya and the MBC crew capture footage at numerous locations, including Sliabh Liag. They stayed in Lough Eske Castle and enjoyed an evening of music and dance at The Reel Inn in Donegal Town.

“Tourism Ireland was delighted to invite Haya Yasmeen Nasser and the MBC crew to film at lots of different locations around Ireland, including Donegal”, said Aisling McDermott, Tourism Ireland’s Manager Asia & Middle East. “The publicity value of a show like this is incalculable. With a huge audience of millions of viewers, it’s a great way of showcasing Ireland in the Middle East, inspiring holidaymakers to come and experience the destination for themselves.

“Television and film are recognised as strong influencers on prospective holidaymakers and Tourism Ireland regularly works with TV and production companies, in the Middle East and elsewhere around the world, to facilitate the making of travel and lifestyle programmes and films around the island of Ireland.”

Tourism Ireland is undertaking an extensive programme of promotional activity in the UAE throughout 2022. The organisation has strong partnerships with both Etihad Airways (based in Abu Dhabi) and Emirates (based in Dubai), who maintained connectivity with Ireland during the pandemic. Tourism Ireland’s Green Button campaign has been running on multiple channels – including digital, radio and outdoor – reaching millions of potential holidaymakers in the UAE.

Tourism Ireland estimates that before COVID-19, in 2019, we welcomed 75,000 visitors from the Middle East to the island of Ireland.