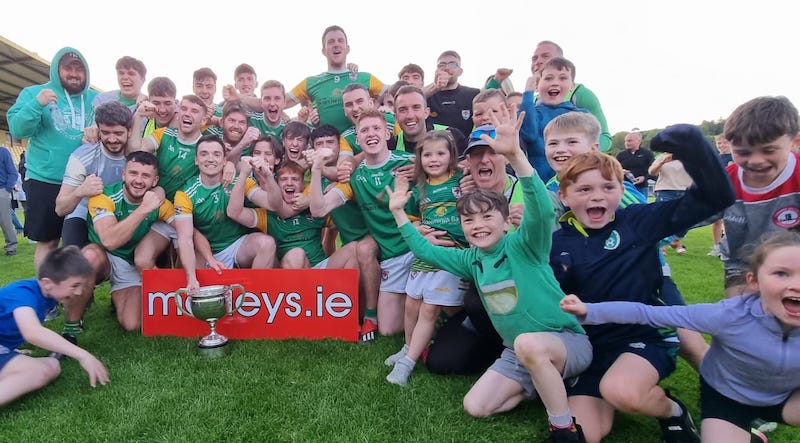 A goal in the dying seconds of extra time helped Downings break Malin hearts in this evening’s Division 2 league final.

By Gerry McLaughlin in O’Donnell Park

Ecstasy for Downings and tragedy for Malin as Johnny McGroddy hit a sensational last gasp shot to the net to snatch victory for “Cookie” Gallagher’s men.

Malin were leading by two points after two fine efforts in extra time from Christy McLaughlin and Adam McGonigle put them into a 1-15 to 0-16.

With victory almost assured, Downings were awarded a softish free on the Malin 14 metre line in the last minute of extra time.

Virtually the whole of Malin was on the line, with a fair few Downings players as well, and it looked an impossible task.

Referee Shane Toolan told McGroddy that it was the last kick of the game, and he somehow managed to rifle the ball over the forest of bodies into the roof of the Malin net.

It was a sensational end to a thrilling encounter that ebbed and flowed with both sides showing loads of guts but loads of inaccuracy as Downings hit 12 wides to ten for Malin.

And it was McGroddy who also took this match to extra time as Malin led by 0-12 to 1-8 with full time beckoning – McGroddy had ice in the veins as he tied matters.

Downings had the swifter start and McGroddy finished a fine move with a great point to open the scoring for the Gaeltacht men.

But the lively Josh Conlon replied in kind for Malin before the Inishowen men struck for a sensational goal in the fifth minute.

Benny McLaughlin found Christopher McLaughlin with a sublime pass and the latter rammed the ball low and hard to the net.

Malin were now buzzing and McLaughlin added another point before Cormac McGettigan split the posts for Downings.

The dancing feet of Benny McLaughlin was causing Downings all sorts of problems.

Lorcan Connor looked sharp for Downings but it was Malin who led by 1-4 to 0-4 thanks to Malin’s Conor O’Neill.

But Downings were growing into the game and it was level at the break on a score of Malin 1-4 Downings 0-7 thanks to fine efforts from McGroddy and Connor.

Downings Martin McBride was a lucky man that his apparent use of the foot on Chris McLaughlin was not spotted by the match officials and the Malin crowd were not happy as the teams went in for the break.

Downings edged in front by two early in the second half through Connor and McGroddy.

Malin hit back through Conlon and sub Terence Doherty.

It was point for point interspersed with some bad wides from there to the finish as both sides strived for victory.

And it looked like Malin had edged it when Matthew Byrne put them into a 0-12 to 1-8 lead.

But a late contested free for Downings was popped over by McGroddy to bring the game to extra time where Malin led by two points at the end of the first period.

Downings hit back with three to go one up and Malin hit three more to go two up.

But that was before McGroddy;s late sensational strike.