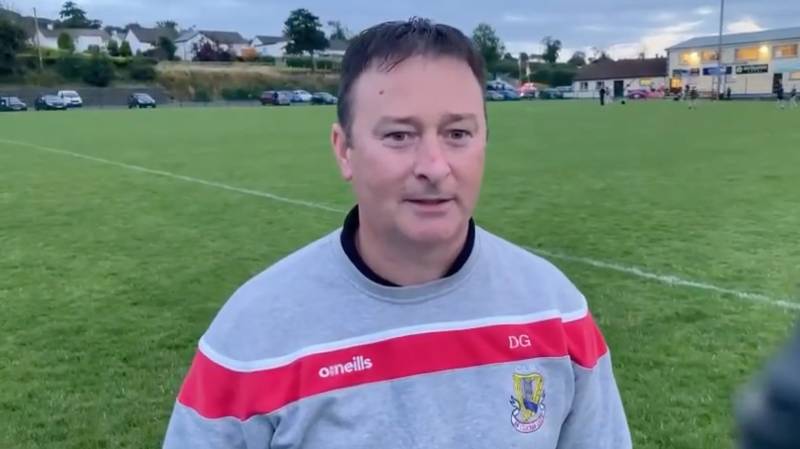 A lively well contested opening quarter had Dungloe just ahead, 1-03 to 0-04.

Burt’s Sean McHugh had opened the scoring with a super point from play but two points in quick succession from Daniel Ward and Barry Curran put Dungloe ahead in the 7th minute.

Things got better for the visitors a minute later , Matthew Ward’s attempt at a point dropped short but wasn’t dealt with by the defence and Oisin Bonner was able to arrive just in time to slid the ball into the corner of the net, 0-01 to 1-02.

Burt hit back with three points in a row, Sean McHugh from a free and two excellent scores from play by Mark McElhinney and Jack O Brien to leave just one between them  but Daire Gallagher’s free ended that first quarter with Dungloe two ahead.

Gallagher added another free , Christopher McDermott replied from play but Daniel Ward converted another Dungloe free to make it 0-05 to 1-05.

Both teams added late point, Calvin Gallagher for Burt and Barry Curran for Dungloe to leave a goal in it at half-time , 0-06 to 1-06 in the visitors favour.

It was eleven minutes In before we had the first score of the second-half , a fine point from Jack O Brien to narrow the gap to two points but Oisin Bonner replied immediately to restore Dungloe’s three point lead.

Sean McHugh converted his third free for Burt but Dungloe hit back with a vital second goal.

Danny Rodgers long kick-out cleared the midfield area, Daire Gallagher raced through unchallenged and laid the ball on a plate for Oisin Bonner to palm to net, a five point lead and Dungloe in control it seemed.

Barry Curran finished off Dungloe’s good victory with their third goal late on to round off an excellent start to their championship campaign with this fine away win.