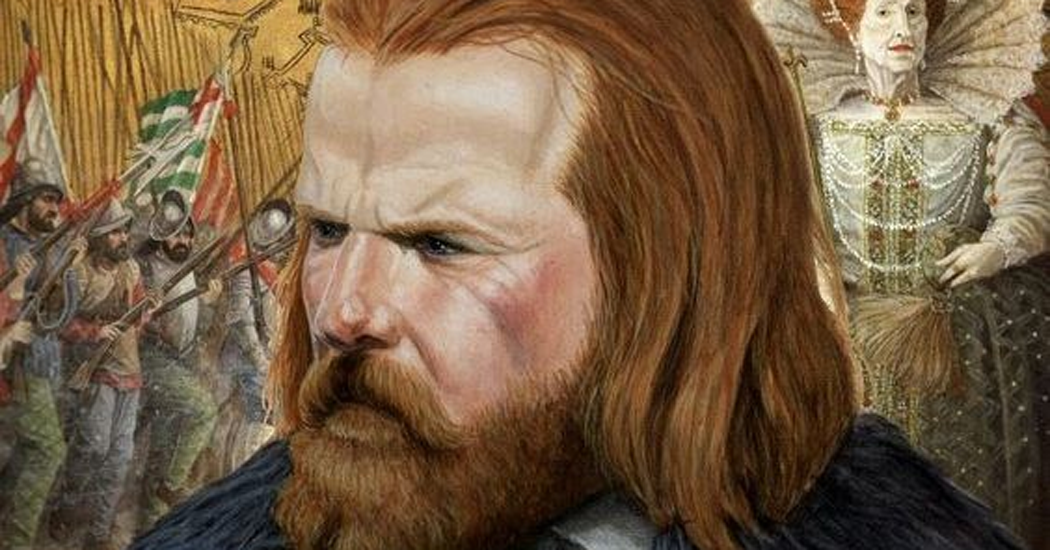 A major fundraiser is underway to generate support for a commemoration marking the 420th anniversary of the death of Red Hugh O’Donnell in Spain.

Communities from Donegal, around Ireland, and other countries are seeking to commemorate the ‘Fighting Prince of Donegal’ in the city of Valladolid, where he is buried.

However, with no funding available from government, the Red Hugh Ó Donnell 420 Committee is appealing to businesses and individuals to support their independent plans to honour the Irish national hero.

Funding from Donegal communities is being sought to strengthen the link between Red Hugh’s homeplace in Lifford and his final resting place in Valladolid.

The Red Hugh O’Donnell Commemoration is scheduled from 10th to the 12th September both dates inclusive.

The commemoration will comprise Irish and Spanish music, dance, historical presentations, and a colourful re-enactment of the iconic funeral procession that will coincide with the Mayoral unveiling of a special plaque at the site of the interment of Red Hugh O’Donnell and Christopher Columbus, in Valladolid, on the evening of 12th September.

The voluntary committee has identified a requirement for approx. € 25,000 to cover the cost of publicity, insurance, hire of professional re-enactors, and other logistical expenses. 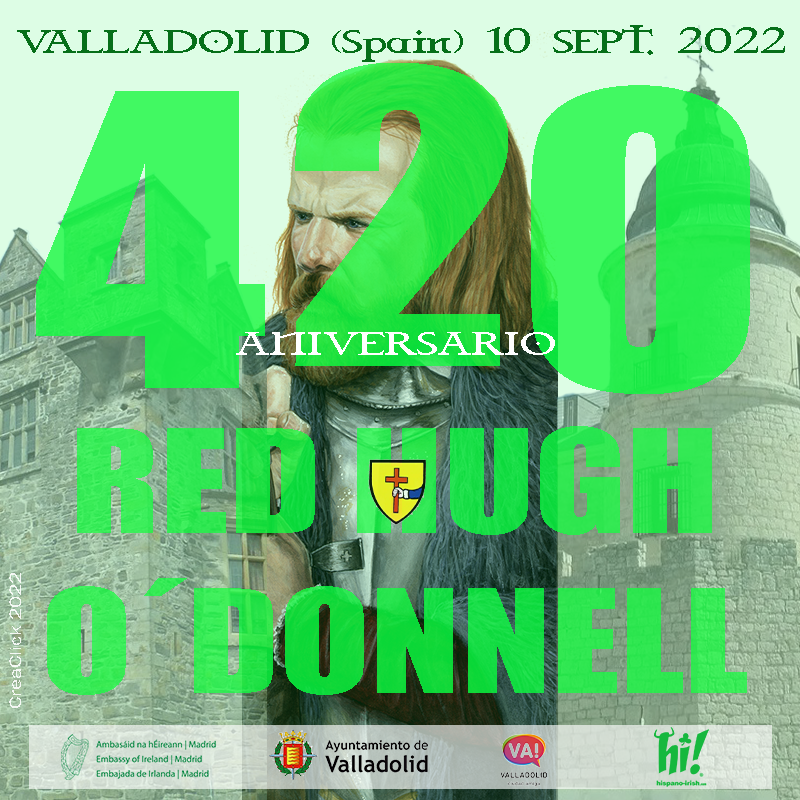 In a public appeal, Committee member Mr Eddie Crawford said: “We invite you to participate and help make this a meaningful, memorable, dignified, and enjoyable commemorative event, planned for Spain and, in Red Hugh’s 450th birthday celebrations planned for Lifford, Donegal on the 30th of October next.

“You can share in our dream by joining us or, by helping with your contribution in our fundraising campaign via the not-for-profit Hispano-Irish Association.”

Businesses who would like to become main sponsors will have their name/company logo appearing on the Souvenir Programme and as the entire event will be professionally recorded for worldwide distribution their company would also be mentioned in this. If any companies are interested please contact
eddie.crawford@hotmail.com

Please feel free to contact us at info@hispano-irish.es and check out the Red Hugh O’Donnell Facebook group postings on Red Hugh Ó Donnell. The Fighting Prince of Donegal

To support the running costs of the Red Hugh O’Donnell Commemoration, visit the GoFundMe page at: https://gofund.me/8ed07c21 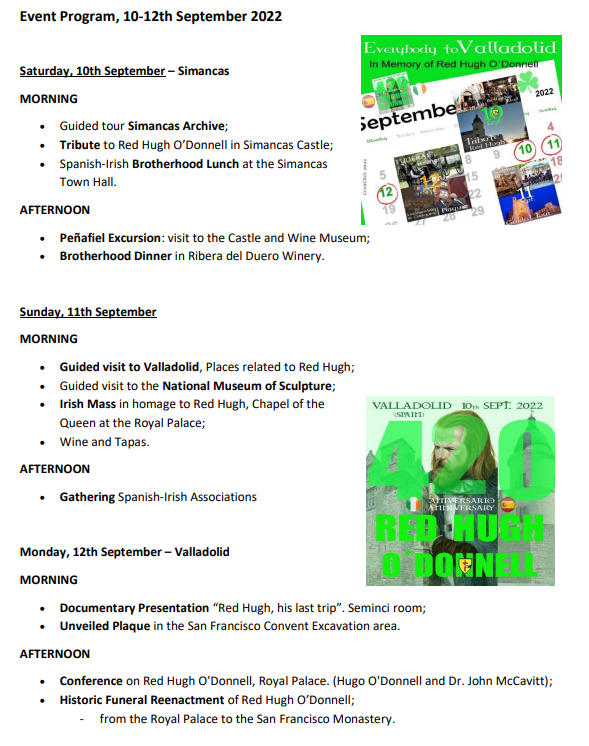 The Story So Far

“ O’Donnell Abú “ – that’s the war cry which we, the diaspora and ‘all and sundry’ identify with, with a passion for old Ireland, linking us to Red Hugh O’Donnell. A timeless Irish national hero whose battle cry echoes across four centuries since his passing. His dream of freedom for his homeland unfulfilled but which he bequeathed to the Irish people in his Last Will and Testament, still railing against English Protestant rule over Gaelic Catholic Ireland.

Red Hugh O’Donnell (known in Gaelic as Aodh Ruadh) was Born on 30th October 1572 to Sir Hugh O’Donnell, King of Tír Chonaill and and Finola MacDonald, daughter of the 6th Laird of Dunnyvaig.

An alliance, following the betrothal of Hugh O’Neill’s daughter, Rose, to Red Hugh O’Donnell posed such a threat to the English domination of Ireland that the young Prince was abducted from Tyrconnell in 1587 and imprisoned in Dublin Castle.

At age 20, after a dramatic but successful escape on his second attempt in 1592, his mother ensured that he was elected King of Tyrconnell and he fought a very successful campaign against the English, called ‘The Nine Years War’ to prevent an English occupation of Ireland aimed at destroying our Gaelic culture.

In 1601, he and Hugh O’Neill were awaiting Spanish support in Ulster to rid the country of the English but for a second time in our history, a storm almost destroyed this Spanish Armada.

When the Ulster Princes realised that the Spanish were surrounded in the town of Kinsale by an English army, their march south has been recorded as one of the greatest forced marches in world history.

Tiredness, lack of provisions, bad weather and miscommunications resulted in their defeat and while the majority retreated to Ulster, the “undaunted” Red Hugh went immediately to Spain, seeking reinforcements from King Philip III, but his young life was cut short when on 10th September 1602, he died of disease aged 29, in the King’s private chapel at Simancas Castle, near Valladolid.

His subsequent funeral was recorded thus in the 18th century, Annals of the Four Masters, which translation to English goes … “It was in the palace of the King of Spain himself in the town of Simancas he died. His body was then taken to Valladolid, to the King’s Court, in a four-wheeled hearse, with great numbers of State officers, of the Council, and of the Royal Guard all around it, with blazing torches and bright flambeaux of beautiful waxlights blazing all round on each side of it. He was buried after that in the chapter of the Monastery of St Francis with great honour and respect and in the most solemn manner any Gael ever before had been interred. Masses, and many hymns, chants, and sweet canticles were offered for the welfare of his soul, and his requiem was celebrated as was fitting his nobility.”

In the summer of 2019, a retired, Irish army Commandant, Brendan Rohan (member of this RHO420 Group) visited Valladolid searching for the tomb of Red Hugh. Somehow, he engaged and inspired a Valladolid City Hall official to assist him in locating the burial site, believed to have been located at the site of the former Franciscan Monastery. Subsequent research and the archeological excavation that followed garnered widespread international TV news and media publicity.

We are an international disparate, but accomplished and passionate collective of Irish, Spanish, UK, and Portuguese-based volunteers (RHO420) who aspire to reawaken interest in Red Hugh’s legacy and restore him to his place in history. What better way to begin this than to organize a weekend festival of activities including Irish and Spanish music, dance, and historical presentations, for the 420th anniversary of the passing of this great Irish chieftain! (see Hispano-Irish Association).

Despite his mortal remains not yet being found, his spirit lives on to inspire a yearning, which has manifested itself in this commemoration.

Scheduled for the 10th to 12th of September it begins in Simancas Castle, where he died. It ends in Valladolid, the 16th century capital of Spain, where he was buried with great dignity at the insistence of King Felipe III, in recognition of his loyalty and that of his Gaelic allies. This State Funeral followed his untimely demise when in the process of seeking further military aid to continue the fight against the English Crown and Protestant domination of Ireland.

To support the running costs of the Red Hugh O’Donnell Commemoration, visit the GoFundMe page at: https://gofund.me/8ed07c21