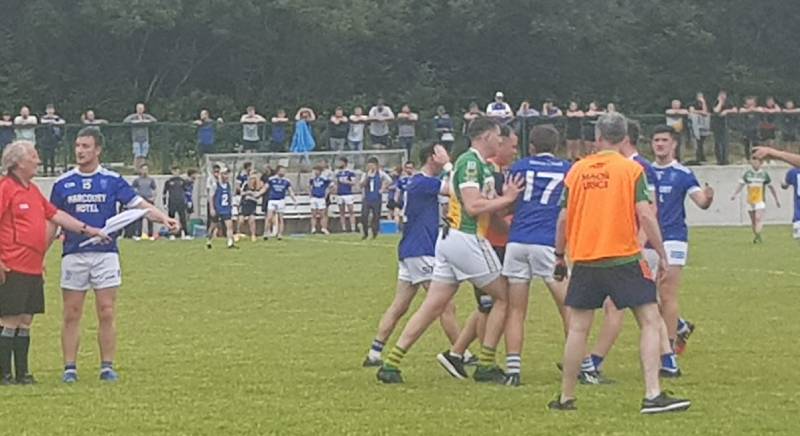 Honours even between Glenswilly and Naomh Conaill in SFC

Glenswilly got off to a great start, scoring 1-02 in the opening four minutes, a Michael Murphy free , Jack Gallagher from play and then a Murphy fisted goal from Gary McFadden’s ball in the square, 1-02 to no score.

Caoimhin Marley and O’Malley exchanged excellent scores and then after scoring from a mark, Michael Murphy sent over a super point from an acute angle to make it 1-05 to 0-04 to Glenswilly.

Back again came the Glenties men , O’Malley sent over his fourth point and then Ciaran Thompson converted from long range to leave two between them 1-05 to 0-06.

Naomh Conaill finished the half strongly with points from Ethan O Donnell and Eoin Waide to leave them level at the break,1-05 to 0-08, probably a fair reflection of the half.

It was Naomh Conaill who got the great start to the second-half , Leo McLoone out jumping both keeper McFadden and a defender to tap the ball to the net and the visitors led by three, 1-05 to1-08.

Keelan McGill made it a four point game with a fine score but a minute later Glenswilly were back in it.

A good build-up set-up Shane McDevitt and when he was pulled down by two defenders, Murphy hammered home the resulting penalty, 2-05 to 1-09.

Odhran Doherty replied for Naomh Conaill with a point and then Glenswilly had another goal chance, Oisin Crawford’s effort blocked close to goal.

Caoimhin Marley pointed another cracker from long range of leave one between them 2-06 to 1-10.

After a short scoreless period a super score from way out on the right side by Caolan Dunleavy had them level.                    The high standard of scoring continued with brilliant points by Ciaran Thompson at one end and Gary ‘Copper’McFadden at the other, 2-08 to 1-11.

Unfortunately tempers became frayed in the closing stages also with a number of incidents, Gary McFadden receiving a red card, others were fortunate that he was the only one punished.

A cracking game and a fair result.

Subs:  A J Gallagher and Daniel Gildea and McGuinness and Hugh Gallagher ( 50mins).

Honours even between Glenswilly and Naomh Conaill in SFC was last modified: August 14th, 2022 by Staff Writer
FacebookTweetLinkedInPrint