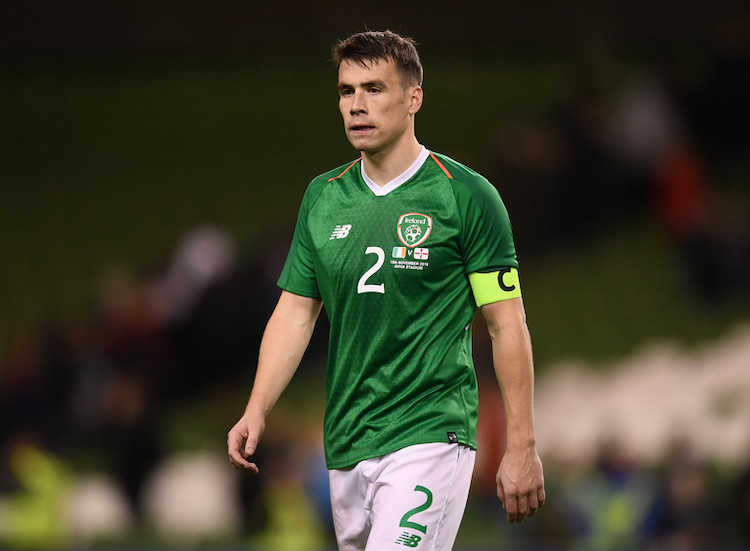 Donegal sportstar Seamus Coleman said himself and wife Rachel are determined to ensure their three kids are not exposed to the perils of social media and the internet.

The Killybegs man is determined to protect his children Lilly, Ellie and Blake from a world that has changed so much since his youth.

The Republic of Ireland and Everton soccer star grew up in an era when Wi-Fi and broadband connectivity were less available.

Yet the world has changed over the last two decades, with youngsters now almost stuck to their phones.

Coleman admits he and his wife Rachel (Cunningham) are determined to ensure their children do not go overboard on social media platforms.

“This issue of the internet and what our kids are looking at is a concern for all parents.

“I go back to my childhood and while I’m sounding old here, I didn’t get a mobile phone until the age of 12 and we didn’t have Wi-Fi everywhere we went.

“That meant we could not have instant access to the things they see on the internet.”

“Back when I was a kid, we were out of the streets playing football with their friends and growing up in a more simple world.

“There is no getting away from anything these days. If a kid was having problems at school, they would tend to end at the school gate.

“Now, those problems are even worse now with social media because they can’t escape from it when they get home now,” he told the Sunday World.

Seamus admits that social media can be good if used in the right way.

He added “Social media is good in some ways and there are some positives with it. The same goes for online platforms that kids can learn from, but then you have the other side of it.

“My daughter is six and knows all about TikTok, but my wife and I don’t have it on our phones because kids tend to grab them when you are not looking and get to see what you don’t want them to.

“We have spoken about making sure we look at what they watch and there are some kids shows on Netflix we let them watch, but everything needs to be in small portions.

“It can have a massive impact on kids if they spend too much time in front of screens and as our kids get older, we are going to have to zone in on what is coming their way.”

Coleman says he is determined to protect his kids from social media perils was last modified: August 29th, 2022 by Staff Writer
FacebookTweetLinkedInPrint