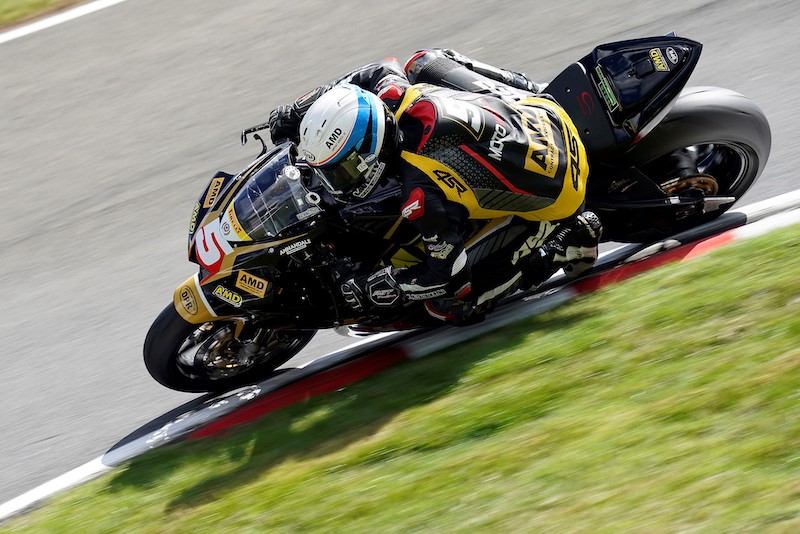 Richard Kerr and the Dumfries-based AMD Motorsport team strengthened their fifth place in the Pirelli National Superstock Championship at Cadwell Park on Bank Holiday Monday with the Kilmacrennan rider taking the same position in the 15-lap race at the Lincolnshire venue.

Having recorded his best position in 2021 at the tight and narrow, 2.18-mile venue, the 22-year old arrived in confident mood and a time of 1’29.072s on the factory-prepared CBR1000RR Honda Fireblade put him eighth quickest overall in Saturday’s free practice sessions, which was a more than solid start to proceedings.

However, he improved upon this considerably in Sunday’s qualifying session and, despite a small tip-off at the hairpin with five minutes to go, a lap of 1’28.497s – an improvement of more than half a second – was good enough for fourth place and the head of the second row.

The morning rain on Monday had cleared up completely for Richard’s race and it got underway in completely dry conditions, Richard completing the opening lap in fourth place behind Davey Todd, Charlie Nesbitt, Alex Olsen and ahead of Billy McConnell.

Championship leader McConnell overhauled him on the second lap, but it remained close and at half race distance, less than two seconds covered the front six riders.

Richard had opening round winner Tim Neave right behind him, but the Yamaha rider made a mistake at turn two and ran onto the grass which removed the pressure but in the second half of the race, Richard ran into a slight brake issue.

The issue, the legacy of Sunday’s spill, meant Richard was unable to maintain his earlier pace and had to back off slightly but he was still able to bring the bike home in a more than comfortable fifth place, his third top six finish in as many races. It maintained his record of scoring points in every race and also fifth in the championship and with Brayden Elliott back in eighth, he moved to within 21 points of fourth place in the championship standings.

Richard Kerr: “It was a good, solid race and fifth’s another good result but I’m also a bit disappointed as I wasn’t able to maintain my pace all the way to the end due to the slight brake issue I encountered. For the first half of the race, I was within two seconds of the race leaders but, after the crash in qualifying where I tucked the front at the hairpin, the brake lever wasn’t quite right and that made braking difficult as the race wore on.”

“Cadwell’s so tight and twisty and there’s a lot of heavy braking so I had to ease off slightly but, on the plus side, it’s another good top six finish and as well as closing the gap slightly to Brayden in fourth, I’ve also pulled away a little bit from Tom Ward who sits in sixth. You always want more as a racer so we’ll go again at the next round and see what we can do – big thanks to the team as always.”

Fraser Dykes, Team Owner said “We had good practice sessions on Saturday, finishing both within a second of the fastest time and inside the top eight and qualifying on Sunday went even better until five minutes from the end when Richard slid off at the hairpin on another fast lap while sitting in P3. Charlie Nesbitt nicked the position off us right at the end of the session and I’m sure the extra three-hour extra practice session that Charlie had on a Superbike on Friday helped his weekend greatly!”

“We ended up with the fourth fastest time and heading row two for Monday’s race, where Richard dropped one place at the start to Alex Olsen. From mid-race onwards, he lost a bit of ground, but he hung on to finish a very credible fifth and close the gap on Brayden Elliot who is now sitting fourth in the Championship while Richard stays fifth. All in all, happy with the weekend and on to Snetterton in two weeks to see what we can do there.”

The next round takes place at Snetterton, Norfolk on September 9-11.