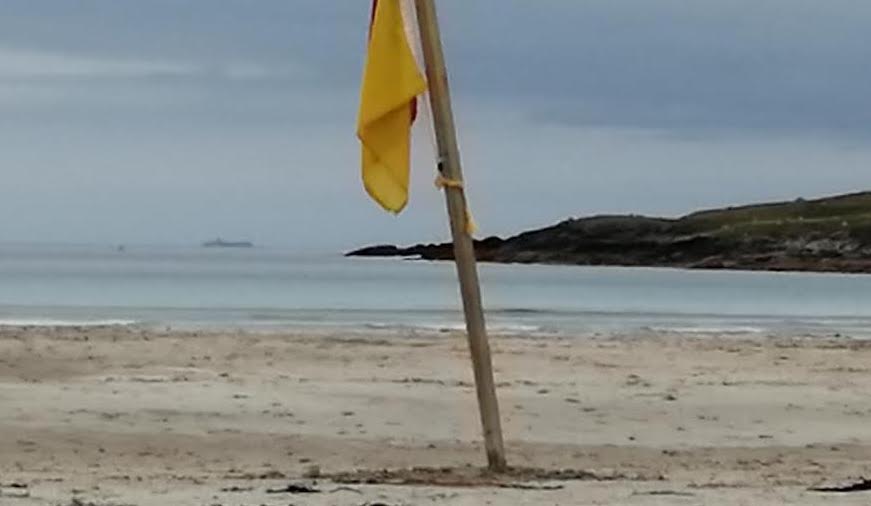 A man out for a summer stroll on Narin beach has told of his shock at witnessing a submarine off the Donegal coastline.

Yesterday we revealed how a surfer on nearby Dooey Beach also spotted the vessel but was not able to get photographic evidence.

Well today we have it.

Our exclusive picture shows the submarine approximately 8 kilometres off Nairn Beach near Portnoo on Saturday afternoon.

The submarine can be seen just to the left of the lifeguard’s flag in the picture.

County Cavan man Ryan Nolan was walking on the beach with his 5-year-old daughter Lena just before 3pm when she drew his attention to the object in the water.

Ryan, whose wife’s parents have a holiday home in the area, is a regular visitor to the area.

He told Donegal Daily “I know the area well and I have never seen anything like this. You rarely see boats in the area but I had to look twice at this before realising it was a submarine.

“It was my daughter Lena who drew my attention to it. She initially thought it was a ‘ghost ship.’

“It’s not the greatest picture in the world but I know what I saw on the day.

“It was only when I read the report of the sighting by another person on your website that it all made sense to me then.

“I’d say I watched it for about ten minutes before it disappeared behind the land. It was a very eerie thing to watch.”

The origins of the vessel, and the reason for surfacing, are not known.

NATO currently do not have any exercises running in the area.

No reports of the vessel were made on the Marine Traffic website which monitors all vessels around the coast.