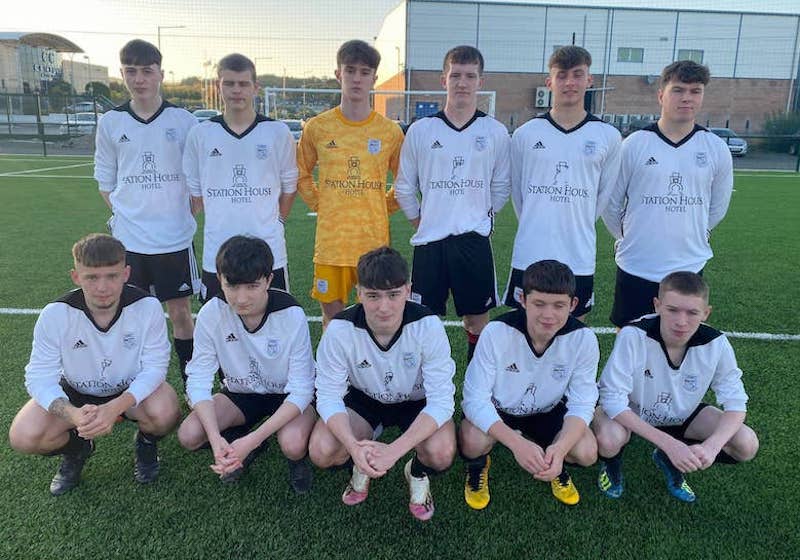 The semi final pairings for the Colin Breslin Youth Cup are now known following a pulsating evening of action on Wednesday.

Both these sides began the game knowing they had already qualified for the semi finals and were playing for positions which would see the table toppers secure home advantage in the semi finals.

They took the lead after just six minutes with a goal of the season contender when the in form Ultan McMonagle fired one in from distance off the underside of the crossbar, giving Odhran Boner in the visitors goal no chance.

That set the tone for the opening period with Aaron Temple firing just wide while Bonar was alert to deny Sam Harvey.

Temple then came close with a header before Ballybofey stunned their hosts on 35 minutes when the impressive Cathal Kennedy fired home when the home defence failed to deal with a corner.

The sides went into the break and Ballybofey should have gone in front straight after Kenendy shot high over the bar when well placed.

However, the home side retook the lead on 51 minutes when Faolan Gibson was fouled in the box before he converted the resultant penalty.

He used his strength to beat two defenders, running onto a Jack Long through ball but saw his thunderous effort crash off the crossbar.

Ballybofey again showed their stubborness and never say die attitude and drew level in the 80th minute when a long ball caught the home rearguard napping and in stepped Kennedy to capitalise and restore parity.

Ballybofey had the better of the final moments, chasing what would have been a dramatic winner.

But the home side held out for the point required to see them back at Leckview for their semi final clash with Kilmacrennan Celtic next Wednesday.

Meanwhile, Ballybofey travel to face Bonagee in the other last four clash.

It was a very even 1first half with Kilmac slightly on top.

However, Ballyraine took the lead midway through the half with Ben Cassidy scoring with a great free kick into the top corner.

Kilmac equalised  early in the 2nd half when a free kick from Eoghan Quinn found its way to the net with the aid of a slight deflection.

The visitors then went in front with 20 minutes to go following a scramble in the box with the ball ending up in the net after a Ballyraine player tried to intercept a cross but unfortunately steered it into his own net.

The game was made safe with five minutes to go when the hard working Cormac Brady brilliantly controlled a long kick out, fed Ciarán McCormack whose low cross was turned home at the back post by the inrushing Jack ó Néill.

Ballyraine were well served by Ruairí Kavanagh, Shay Maloney and Ben Cassidy with Cian McMenamin, Rory McGrenra and Cormac Brady showing well in a strong second half for the Lurgysiders.