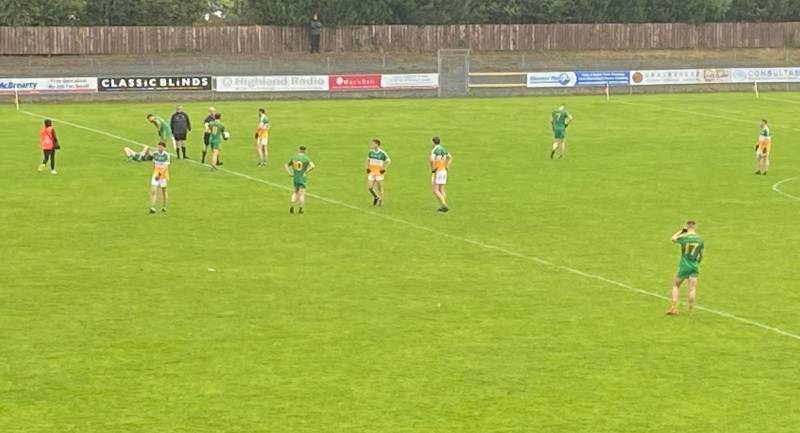 Aaron Doherty had a remarkable game as Naomh Columba stormed to victory over Buncrana in the quarter-final of the IFC at O’Donnell Park.

Doherty scored 1-7 and Christopher Byrne got 2-2 in the pouring rain in Letterkenny, as the Glen men were on top form to again beat Buncrana in the Championship.

It was a six point win last time in late August and again they had the number of the Inishowen side to win by 11 points, as Buncrana finished with 14 when John Campbell was sent off.

Buncrana could’ve had an early goal in this encounter as a long ball dropped to Ryan Hegarty but Padraig Byrne dived to clear.

And Naomh Columba went into a quick three point lead with Ryan McNern opening the scoring out left at a tight angle, while Aaron Doherty showed his quality in scoring from both sides.

Oisin Crawford got Buncrana’s first score after 11 minutes after a great run, but they had already wasted multiple chances at this point.

Naomh Columba extended their lead as Christopher Byrne and Pauric Hegarty exchanging passes before the former had the ball over the line, with protests from the opposition. But referee Enda McFeely consulted with the umpires before giving the goal.

A Doherty free and a Byrne fisted effort made it 1-5 to 0-1 after 20 minutes, giving Buncrana plenty to do.

Darrach O’Connor scored a quality point, Buncrana’s second of the game after 26 minutes but a minute later Doherty scored an equally impressive point.

Crawford went on another bursting run before pointing and Ryan McElhinney made it 1-6 to 0-4 at the break.

Buncran came out looking to get back in it and almost were immediately as Ben Bradley’s strike for goal went a bit high but cannoned off the post.

And instead of being a two point game, it was six as Byrne got his third score of the game.

Buncrana keeper Harry Doherty scored a 45 following a dangerous ball into the square from O’Connor and William McLaughlin got his first from play.

But the Glen men renewed their six point lead with Fionn Gallagher and Kevin McNern pointed.

O’Connor and substitute Lanty Molloy exchanged scores before it got worse for Buncrana.

A quick counter by Naomh Columba, with Buncrana pushing forward saw them get caught out and when Ryan Gillespie played in Byrne again and he rounded his namesake to slot into the net, 2-10 to 0-7.

In the aftermath of the goal, Buncrana half-time substitute John Campbell was given a straight red after an altercation with Eric Carr left the Glen man on the ground.

Buncrana kept pushing and ‘keeper Doherty started playing in midfield to negate the man disadvantage as they scored three from play through substitute Adrian McColgan, Ryan McElhinney with his second of the game, and O’Connor with his third as Naomh Columba got one from a Doherty free.

Aaron Doherty was at it again in quick succession with a fantastic point from a tight angle, before a 1-2 with Lanty Molloy and a great run again by Doherty from right to left of the goal, firing back across into the bottom right corner.

The Naomh Columba display was probably summed up by Buncrana getting a point at the fifth attempt after four brilliant blocks from the defence before the fifth was palmed over the bar.

And the final score typically came from Aaron Doherty, with a great free to make it 3-13 to 0-11 at full-time.